Like a good salesperson, a great wine book introduces new wines, regions, concepts, and debates. This season there are three new releases—all from well-known authors—that do just that. While we all only have so much bookshelf space available, these deserve a spot, as they demystify seemingly difficult wine chemistry, offer up professional inspiration, and raise questions about why wine tastes like it does.

The Sommelier’s Atlas of Taste: A Field Guide to the Great Wines of Europe

When Rajat Parr’s and Jordan Mackay’s Secrets of the Sommeliers: How to Think and Drink Like the World’s Top Wine Professionals was published in 2010, it offered a thorough, introductory primer to wine. In this, their second book, the authors present a more advanced tasting tour through Europe. Less a reference guide than a tasting travelogue, with blurbs on where to dine and sleep along the way, The Sommelier’s Atlas seeks to explore why wine tastes as it does by looking at the soils, cépages, climates, and personalities across the continent.

From the outset, it’s clear that Parr and Mackay have a natural affinity for the wines of France. Whereas French regions and wines are given roughly 200 pages, Italy sees only 50 pages and Austria, Germany, and Spain make up only about 50 pages combined. Greece and Portugal are completely left out, as are Italy’s Friuli and Campania, and Spain’s Rías Baixas and Jerez, among others. While I worry that this narrow framing will give novice readers the impression that the latter are less important rather than simply less interesting to the taste buds of Parr and Mackay, the information that is in the book is incredibly useful. The authors go into great detail about how various microregions are truly different from one another, getting to the nitty-gritty of the nuances of taste in white Burgundies, say, by zooming in on Meursault, Puligny, and Chassagne-Montrachet.

Another strength of The Sommelier’s Atlas of Taste is conversations with Parr on how he thinks about his favorite European wines. In sections called “Questions of Taste,” he points out the distinguishing characteristics of various appellations in terms of taste. For instance, “How to tell Pomerol from St-Émilion” or “How can you tell Barbaresco from Barolo?” Students studying for WSET courses and MS certifications will especially benefit from this practical tasting advice.

Parr’s prodigious wine-tasting abilities are on full display and can at times verge on pretentious, but this is alleviated by Mackay’s lively writing and crystal clear explanations. This guide comes with an interpreter who has a clear sense of the boundaries of perception. On multiple occasions, the authors concede that “telling the two wines apart is not easy,” a casual honesty that is not too often encountered. Parr and Mackay handily succeed in covering the details about European wine that matter from the practical standpoint of a sommelier rather than mysticism. Even if you find yourself disagreeing with certain opinions in the book, like “The only grape sommeliers are really snobby about is Zinfandel” or “It’s time to rewrite the book on Meursault,” the ability of the text to encourage dialogue with other wine professionals makes this a worthwhile read.

What Makes a Wine Worth Drinking: In Praise of the Sublime

“There’s a secret we ‘wine people’ know, and it is that everyone else hates us,” announces wine importer Terry Theise in his second book, What Makes a Wine Worth Drinking. I can neither confirm nor deny this, but it’s definitely an idea worth considering.

In reading this book, some may wonder whether Theise is a philosopher or an importer. The strength and charms of his philosophical arguments have helped define his career. He writes unapologetically about what he believes makes one wine better than another. For him, arriving at such conclusions was just another of life’s pleasures, and he happily revels in the subtlety and nuance of it. What Makes a Wine Worth Drinking is a thorough investigation of quality and, in his words, “why any of this matters at all.”

His conclusion: wine is great when it is “companionable, accommodating, refreshing, interesting, attractive, and distinctly itself.”

Each chapter takes us along Theise’s wine journey from finding “That First Bottle” to entering the wine business in the late ’70s to defining his own rules for the wines he brought into his portfolio. Ultimately, Theise looks for wines that are first and foremost “honest and authentic.” With so much “fake news” these days, one can’t help but feel he’s also making a political statement.

Theise is of the mind that beauty in wine bears examination, but not dissection via systematic tasting grids or 100-point scoring rubrics. It’s enough to find delight in an honestly made white or charm in a rustic red. “If you love wine, it belongs everywhere,” he writes. This is part of its magic. (Remember this when a family member questions your career choice over the holidays.)

This book is a nonfiction romance novel. It won’t teach you how to pronounce the names of the Premier Crus of the Côte de Beaune, but it will likely remind you why you choose wine as a vocation. During the harried days of OND (October, November, and December), who doesn’t want to fall in love with wine all over again? 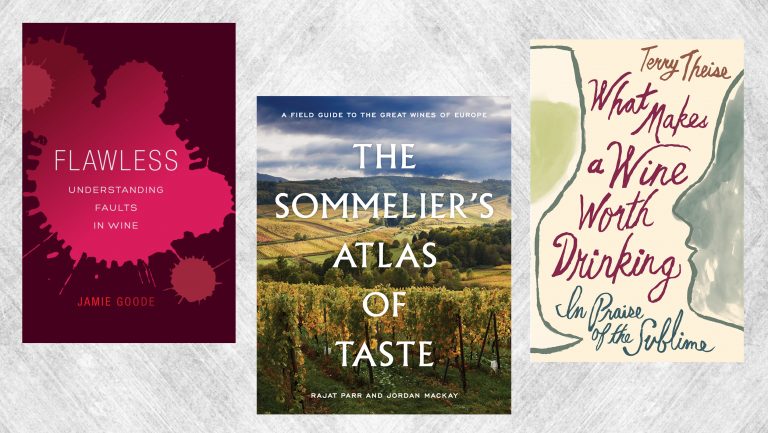 In his new book, Flawless: Understanding Faults in Wine, British writer Jamie Goode addresses the subject of faults in wines, a largely misunderstood topic in the wine industry. As interest in the subject grows, he’s the first to tackle it full-on since John Hudelson published Wine Faults: Causes, Effects, Cures in 2010.

“It’s complicated,” Goode writes, as he introduces his readers to Brettanomyces, oxidation, volatile acidity, and lesser-known faults such as geosmin and light damage. While a budding oenophile might find plenty to think about in Flawless, those who work with wine on the regular will find Goode’s summations and citations of scientific research in advanced biology and chemistry to be particularly useful.

Each chapter explores a different fault, beginning with a quick list of details as to the cause, flavor impact, and pros and cons of each. From there, Goode delves into more complex research, but always delivers it in simple, accessible language, making it comprehensible for anyone without a degree in biology. He masterfully softens the hard science with anecdotes and interviews.

One of the central conceits of Flawless is the Japanese idea of wabi-sabi, the notion that “flaws are part of beauty.” In this context, something like oxidation, long assumed to be a fault, can in some cases improve the quality of a wine by introducing savory and earthy qualities. On the flip side, Goode describes how Burgundy’s legendary Jean-Marc Roulot is able to achieve balance in his wines by using reduction as a tool. Goode’s wine references to familiar bottles and winemaker interviews provide much-needed context for all the heavy science. This bond between theory and practice makes this book a valuable resource.

It’s a little frustrating that the author devotes more space to eucalyptus taint (which occurs in regions where the aromatic compound cineole is able to make its way from eucalyptus trees onto grape skins) than the scant single page that covers the impact of industrial pollution on wine, a subject of increasing concern. That said, Goode does include a timely discussion of the effects of smoke taint and the influence that global warming may have on grapes.

Flawless is not quite a textbook—and that’s a compliment—but serious wine professionals would be smart to open a copy the next time they want to debate something like a natural wine’s mousiness (a fault caused by lactic acid bacteria). Goode notes that it’s hard to detect this fault because it isn’t noticeable on the palate until the taster’s saliva raises the wine’s pH; as such, mousiness can only be detected retronasally. Break the news gently to your colleagues who proclaim, “I’m getting tons of mouse on the nose,” before the wine hits their lips. They are not alone in this confusion; even natural wine guru Eric Texier admits in Flawless that he has no idea where mousiness comes from. Goode has done us all a service by taking wine flaws beyond the realm of interesting and into the realm of comprehensible.

Scott Rosenbaum is CEO of Ah So Insights, a wine and spirit industry newsletter and consultancy. Scott was formerly the vice president of T. Edward Wines & Spirits, a New York-based importer and distributor.

These editions will ensure you’ve got the latest intel on rum, mezcal, and Japanese whisky

From the classic to the new, these must-have books will sharpen your knowledge