Ron Cooper, a visual artist and the founder of the mezcal brand Del Maguey, came upon Oaxaca in the 1970s while on a quest to find out if the Pan American Highway really existed. But it wasn’t until 1990, when he was in the area to focus on his art, that he began visiting remote villages and tasting their artisanal libations and became interested in mezcal. Realizing that it would be challenging and expensive to fly his discoveries back to the U.S.—only a three-liter bottle was allowed—he set about obtaining import and export licenses. Del Maguey grew from there. Now the Keeper of the Customs (yes, that’s his official title), Cooper focuses on the wellbeing of the producer families who supply Del Maguey during his monthly trips to the region. Here, he shares his advice on where to go, what to see, and—of course—where to eat and drink in this thriving mezcal epicenter.

After landing in Xoxocotlán International Airport, take a taxi to Oaxaca City, the capital of the state of Oaxaca, and forget about driving for a while. It’s a pedestrian-friendly city, and cabs are available if needed. Smaller satellite villages dot the roads leading into the town. For excursions outside the city center, buses depart frequently from two major depots.

A plethora of lodging options are available. For a luxurious experience, Cooper suggests the Hotel Casa Oaxaca (García Vigil 407), whose seven rooms showcase works by contemporary Oaxacan artists. The family-owned Casa de las Bugambilias (Reforma 402) is located one block from the Santo Domingo Church and Culture Museum. While its location is a draw for travelers, the property also offers a temazcal experience—a traditional sweat bath and massage meant to purify the mind, body, and spirit; Cooper recommends a session with Señora Aurora. The Hotel Marqués del Valle (Portal de Claveria S/N, Centro) is located right on the Zócalo and boasts a great on-site restaurant. In other parts of Oaxaca State, says Cooper, the Hotel Santa Fe (Puerto Escondido) “is a fabulous hotel and restaurant on the beach.”

Mezcal is the obvious choice of drink, and many places in Oaxaca offer a depth and breadth of mezcal products rarely seen elsewhere in the world. Del Maguey’s Tasting Room (Macedonio Alcalá 403) is just one of the many spots at which you can sample the local spirit. Cooper recommends exploring the range the city has to offer by doing your own tasting tour of the local drinking spots.

Mezcaloteca is a reservations-only place on Reforma with a beautiful bar (reservations can be made online). “It’s like going to a library,” Cooper says, adding that the knowledgeable staff can guide you through the extensive mezcal selection as well as the educational tools, such as maps that detail the major mezcal-producing areas in the region. (Reforma 506)

Cooper also praises In Situ, the mezcalería owned by renowned author and mezcal expert Ulises Torrentera. “Wow,” Cooper says, “that guy Ulises and his wife, Sandra—they’re killing it. I’ve known them since 1996, and they have the best selection in town.” Their collection of more than 180 varieties—which the owners claim is the largest in the world—showcases mezcals from some of the most remote villages in the region. (Morelos 511)

While El Destilado is more renowned for its kitchen, Cooper says that its large selection of small-batch mezcals make it an excellent place to drink the spirit—and to pair it with delicious Oaxacan fare. “[The] rooftop terrace,” he adds, “has great views of the city center.” Inside, the walls are decorated with beautiful murals depicting agave spirit art. (5 de Mayo 409)

It’s important to note that “comida—the biggest meal of the day—is between 2 and 5 pm,” says Cooper, “and not at night, for dinner, as [Americans] are accustomed to.” Although this has been changing over time to adapt to tourists, it’s best to check in advance to see whether a particular restaurant serves dinnertime meals when making reservations.

This seafood restaurant uses its outdoor, wood-fired horno for many of its entrées. Cooper says that the owner, Tony, whom he counts as a friend, makes “a killer butterflied huachinango [red snapper] that’s not to be missed.” (Pino Suárez 806)

Cooper is enthusiastic about this unique project by Amado and Lea Ramirez. “Amado,” he says, “is an agronomist recognized by the Slow Food movement for his passionate work; he presents tastings of select unhybridized corn and vegetables from diverse regions.” (Belisario Domínguez 513)

Alongside the Santo Domingo Church sits Casa Oaxaca. Cooper says that Alejandro Ruiz is a great chef, who draws his inspiration from seasonal ingredients found among the geographical regions of Oaxaca. (Constitución 104-A)

Cooper recommends that you forgo the traditional restaurant experience to try this cozy dining option—the home of the chef, Señora Deyanira Aquino, who serves a selection of Oaxacan classics. (Violetas 200)

Cooper adds that there are several places that put just as much emphasis on their cocktails as they do on their food. He says that along with its “cool cocktails and very interesting menu,” La Biznaga (García Vigil 512) always has a great soundtrack playing in the background. Sabina Sabe (5 de Mayo 209), which Cooper says has the best cocktails in Oaxaca, also has a menu that can accommodate vegetarian and vegan diets.

Zócalos, or central plazas, are the heart of each Mexican town and were designed to be the center of commerce and government in colonial times. Most of Oaxaca’s green limestone buildings were sourced from one quarry in town and make for a colorful backdrop to the sounds and smells of this gastronomic haven. 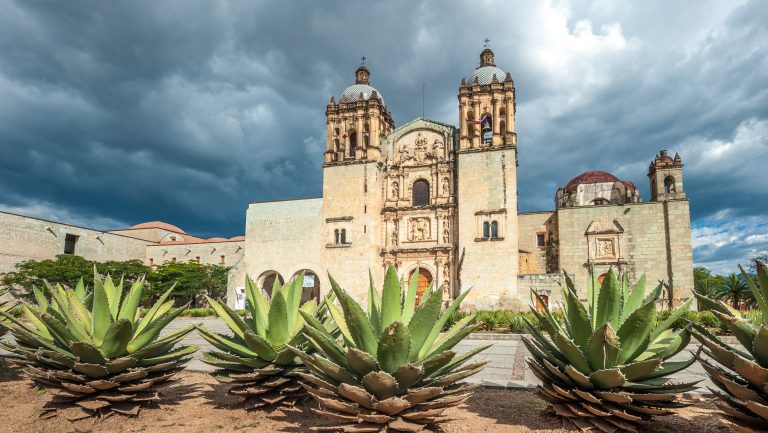 There are many activities to enjoy in Oaxaca. Across from Del Maguey’s office and tasting room is El Baule, which is renowned for its tapestries. “Remegio [Mestes], a fiber specialist and an amigo, has the best collection of Teotitlán del Valle weaving, huipiles, and more in Mexico,” says Cooper. “The colors are impossible to miss. If the rugs are hanging, drop in and say hi.”

And if you want to truly understand the essence of Oaxacan cuisine, Cooper advises that you head to the countryside for a cooking class with Susana Trilling, owner of Seasons of My Heart, a cooking school and shop that also offers culinary tours. On Saturdays, Cooper also recommends setting aside two or three hours to wander the Central de Abastos market. “Be sure to eat caldo de chivo [goat soup] in the booth of the woman from Tlacolula,” he says. “Her name is Flor, and [her booth] is near the flower stalls. And don’t miss drinking pulque [fermented agave sap] at Las Hermanas Mateo, in the area where they sell seeds, magic potions, and live turkeys and ducks.”

Finally, take a step back from Oaxaca’s rapidly modernizing cultural life and visit the Mitla and Yagul architectural ruins. Both display vestiges of the Zapotec civilization. The former is considered to be the religious epicenter, while the latter was a key city-state for the ancient people. Back in town, Cooper says, the Santo Domingo Church (Macedonio Alcalá S/N, Centro) and its grounds “offer a great [example of architectural] restoration, museums, and the fabulous Botanical Gardens, with guides that describe agricultural traditions from across Oaxaca State.”

Shana Clarke is a freelance wine writer based in New York City and a PR/Marketing consultant for the wine and restaurant industries. You can often find her drinking BYOB Champagne at dim sum brunch. Follow her on Instagram or visit www.shanaspeakswine.com.

The acclaimed wine writer shares her favorite places to eat, sip natural wine, and shop in the City of Lights

Where to eat, drink, and explore wine in New York State’s northwestern region

The mezcal producer shares his tips for where to eat, drink, and explore

From note taking to mapmaking, here’s how experts optimize their trips