Wine on tap is exploding in popularity—talk with any operators who’ve added kegs to their wine program. It seems more like a movement than a trend. From bustling brunch spots to New American wine bars to rustic pubs, venues across the country are reaping the benefits of faster service, smoother operations, improved bottom lines, and a dramatically decreased carbon footprint. Here, six operators, from San Francisco to Orlando, discuss the ways in which tap wine has changed the way they do business:

Samantha’s Tap Room & Wood Grill is a high-energy, high-volume New American restaurant and bar with soaring ceilings and windows overlooking downtown Little Rock, Arkansas. Before the owner, Chris Tanner, opened Samantha’s three years ago, he talked to fellow restaurant owners in other cities who offered wine on tap at their bars.

Based on their positive feedback, Tanner decided to add a 20-tap wine system to his operation. “I liked the concept, and it turned out to be a good deal for us,” he says, adding that taps help keep service running smoothly and efficiently when the restaurant gets crowded. “If you’re doing any kind of volume, it really helps,” he says. “We’re able to get the drinks out quick, and we pride ourselves on that.”

From a logistical standpoint, it’s hard to argue with the appeal of wine on tap—it just makes day-to-day operations easier. Stocking, storing, and discarding bottles may seem like insignificant tasks, but they add up. When that work is eliminated, time is freed up for more important things, says Matthew Cristi, the general manager at Highball & Harvest in the Ritz-Carlton Orlando, in Florida. “When you begin to break down the time it takes to accomplish all of these minute tasks,” he says, “taps are much more of an effective and exciting way to sell wine.”

Jess Voss, who opened San Francisco’s Jamber Wine Pub in 2012, says that installing draft wine equipment during Jamber’s buildout was a no-brainer for her. “Dealing with the headache of numerous bottles of wine—the storage, the bottle, the label, the cork … you can skip all of that,” she says. Plus, tapping a keg and not having to change it for a week or two lets staff avoid the scramble of searching for a particular bottle. Storage consolidation is another benefit: Jamber offers 24 wines on tap, and all of its kegs fit into one closet.

For Snooze, mimosas are top sellers at every one of its 20-plus breakfast and brunch restaurants. Jon Schlegel, cofounder of the Denver, Colorado–based chain, says Snooze saw an immediate increase in service efficiency after sparkling wine on tap was installed—and the time savings allowed his staff more room for creativity. “We have a lot more confidence now to play with drink recipes because operationally, we can handle more volume,” says Schlegel. “Taking the time to unwrap the foil, remove the cork, trying not to hit a guest with the cork … all of that is eliminated. You save 10 or 15 seconds per glass, which for us is significant.”

Finally, at Samantha’s Tap Room, Tanner points out that trash duty is much easier. “When the staff take the garbage out at night,” he says, “they can hold the bag with two fingers.”

3. No Oxidation or Consistency Concerns

The longer a bottle of wine is open, the more the wine shifts from its original flavor profile, inching toward the flat, acetic notes of oxidation. Even if you’re able to salvage the wine before it becomes oxidized, the shifting flavor means that pours vary from one night to the next. For venues that prize consistency, wine on tap has been a game changer. For Justin Beam, the general manager of Sixty Vines, a Dallas wine bar, it’s a priority to deliver wine to the customer as the winemaker intended. With Sixty Vines’ 42-tap system, that’s exactly what he’s able to do. “We’ve never had a glass come back stale,” Beam says. “The last glass tastes exactly the same as the first.” 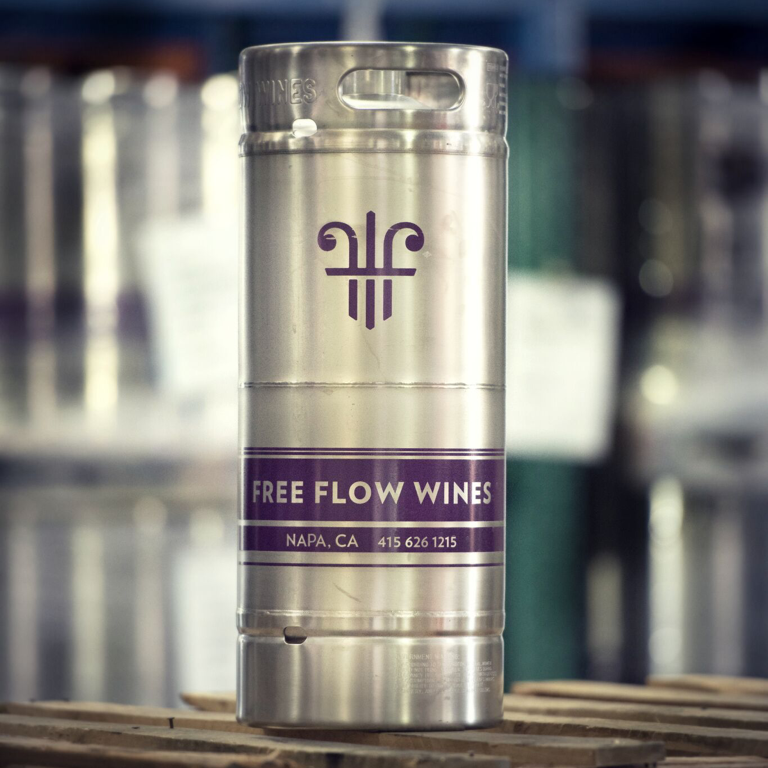 Search across distributor portfolios in your market for “Wines on Tap”

Even worse than pouring wine inconsistently is pouring it down the drain. For Kent Bearden of Saint Marc, a popular American cafe and pub in Huntington Beach, California, wines on tap helped solve a common operator’s problem: seeing staff open six bottles at the beginning of a shift but then only selling four. “That means you’ve got two bottles of wine that are going to spend a minimum of 24 hours being exposed to oxygen before they have the opportunity to be served again,” he says. “Wine on tap eliminates that.” In addition to protecting the wine from oxygen by keeping it pressurized, Bearden says, the stainless steel kegs prevent damage from light as well: “It really is kind of the best container for protecting the quality of the wine.”

The economics of wine on tap benefits both operators and guests. Highball & Harvest, for one, experienced a 20 percent rise in sales from wines by the glass once it implemented wine on tap, says Cristi.

Voss, at Jamber, appreciates that she can pour higher-quality wines at lower prices. “Wine on tap is more economical for us, and therefore more economical for the customer,” she says. “We can pass down the savings so they can get a better wine at a more modest price because it’s coming to us at a less expensive price.”

Saint Marc’s Bearden adds that as consumers have access to better wines through retail, they’re more likely to notice high markups on the same wines in a restaurant. “Because I’m saving on waste, I’m saving on spoilage, and the vessel that I receive [the wine] in I return for a credit, I’m able to be much more aggressive in my wine pricing,” he says. While a wine like the red-blend Arise, from Napa’s Blackbird Vineyards, would typically run $35 to $40 a glass in a fine-dining restaurant, Saint Marc has it on the menu for $20 a glass.

As wine kegs become more commonplace in bars around the country, consumers are getting up to speed, too. An element of education is still necessary, but Voss says it’s an easy sell. “In the beginning, it was something new to people, but the awesome thing about wine on tap is that you can pour [people] a little taste to find out what they like,” she says, noting that her staff spends more time talking to customers about the wine and letting them taste samples, and less time finding and opening bottles. According to Voss, the bar’s keg wine program is essential to its cozy, rustic, laid-back vibe: “I wanted Jamber to be a place where you could come in, wearing whatever you want,” she says, “and order a glass of wine [the way] you would order a glass of beer, to just enjoy it with your friends.”

When Beam opened Sixty Vines last year, he was concerned about how quickly guests would embrace the program of wine on tap. “What we realized quickly was that if the wine tasted great and there was a really good value, that’s all the guests cared about,” he says. “One of the biggest things we’ve come to understand and have learned is that wine on tap works, and there’s a market for it.”

Glass can be difficult and expensive to recycle—and a high-volume wine bar goes through tons of bottles every year, most of which end up in landfills. Opting for stainless steel kegs stops this waste. Since 2009, Free Flow Wines estimates that its keg program has prevented some 21 million bottles from entering landfills.

Even at the individual venue level, the savings can be substantial. Schlegel notes that Snooze has diverted an estimated 100,000 bottles from the landfill since it moved to wines on tap. And Cristi says that over the past three years, Highball & Harvest has saved more than 16,000 glass bottles, 15,000 wood-based corks, and some 500 cardboard shipping boxes.

Saint Marc, meanwhile, serves only wine on tap and beer in aluminum cans—there’s no glass at all in the venue’s wine and beer program. “When you think about a high volume restaurant,” says Bearden, “that’s a tremendous impact just from one store.”

At Sixty Vines, environmental responsibility is built into the company mission. “It’s in our ethos as a company to be sustainable and do things the right way,” says Beam. “We’re a small part of the movement, but we’re super proud of it.”

7. The Wine Selection Is Bigger Than Ever

When Bearden was putting Saint Marc’s wine list together in late 2015, it wasn’t as easy to find a range of wines that suited the pub’s program. But now the tables have turned, he says—“I have more people asking for placement than I have handles to give. We’re serving a Chinon Blanc, and a Malbec, and we have some beautiful red blends, and we served a French Colombard … It really is interesting to see, just in that small snippet of time, how much the industry itself has really fast-forwarded.” Bearden adds that Saint Marc recently hosted, for the first time, a sold-out five-course wine dinner with a single producer, who provided all of the wines in kegs—no bottles.

What years ago was a limited category has now exploded with brands and varietals. At Jamber, Voss used to ask wineries to put their wines in a keg. “Now people are banging on my door to get on my taps,” she says. Beam echoes this, saying that producers who initially balked at requests to put their wine in kegs are now knocking at Sixty Vines’ door; the wine bar’s 42 wines on tap are not only stylistically but geographically diverse—ranging from Argentina to Italy to New Zealand. “This is a trend that’s not going away,” says Beam. “It’s going to grow. I really think it’s how millennials and my own children will experience the future of wine by the glass.”

Kicking off its sixth year, the #JLohrWomen Campaign aims to bring new talent and ideas into the industry with an event series and educational opportunities

Less than a year old, Spirit of Gallo is an industry leader with an award-winning portfolio of brands driving the trends of tomorrow