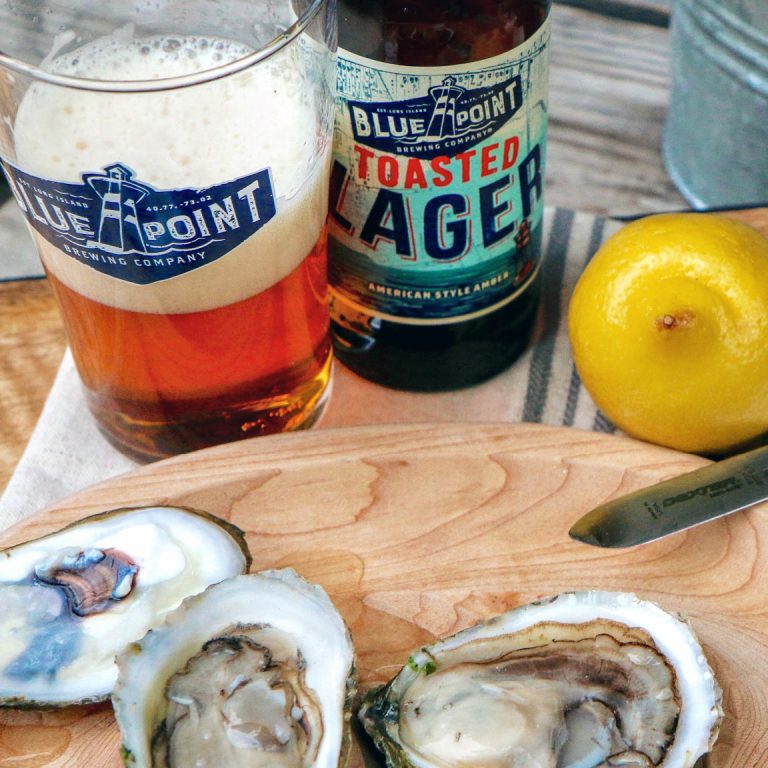 Because of its humble beginnings in a boatyard on Long Island in 1998, Blue Point Brewing Company has always focused on making craft beers with a laid-back feel. These unpretentious beers—from the classic Toasted Lager to the bright and vivid Hoptical Illusion—are true to the company’s coastal hometown roots.

“Our beer has the ability to bring lots of different kinds of consumers together,” says Jenna Lally, Blue Point’s president. “Over the years, we’ve stayed true to the concept of everyday beers,” she notes, adding that the backdrop of Long Island is never far from view. Mixing innovation with a firm understanding of its heritage, Blue Point Brewing Company has found unique ways to expand its operations while continually drawing inspiration from the local seafaring culture.

“We’ve done a really great job of incorporating the local environment into our product,” Lally says. “We love to work with sea salt, and even seaweed, oyster shells, and beach plums. I think that really excites our consumers.”

“Our flagship beer,” says Lally, “Toasted Lager is a beer you can have at a barbecue, on any night of the week, or on a weekend.”

Toasted Lager has brought renown for Blue Point Brewing Company’s beers and placed them at the forefront among consumers, particularly along the East Coast. In 2018, Blue Point opened a new facility down the road from the original boatyard brewery where it all began. With the increased production made possible by the expansion, the company has launched two new and exciting beers that will soon become staples on many taps around the country.

With its to-the-point name, The IPA is a hoppy yet balanced India pale ale that delivers on a direct, no-nonsense approach. “We created a beer that our brewers want to drink every day,” says Lally, adding that the recent trend of high-alcohol, supremely bitter IPAs was not a fit for Blue Point Brewing Company. “We were pretty unapologetic about it,” she says. “We wanted to make an IPA with low perceived bitterness and a juicy mouthfeel—and a beer that you can keep coming back to.”

The other new offering that Lally is excited about is called Shore Thing. “Shore Thing,” she says, “is an awesome light lager brewed with Long Island sea salt, which gives it a really distinct flavor.”

For on-premise professionals, Blue Point Brewing Company offers a compelling combination: These beers can be put on tap to satisfy everyday thirsts while delivering enough complexity and distinctiveness to make customers ask for them time and time again. “As a brewery, we are really investing in creating a connection with consumers,” adds Lally. “There’s a lot of momentum behind the brand right now.”