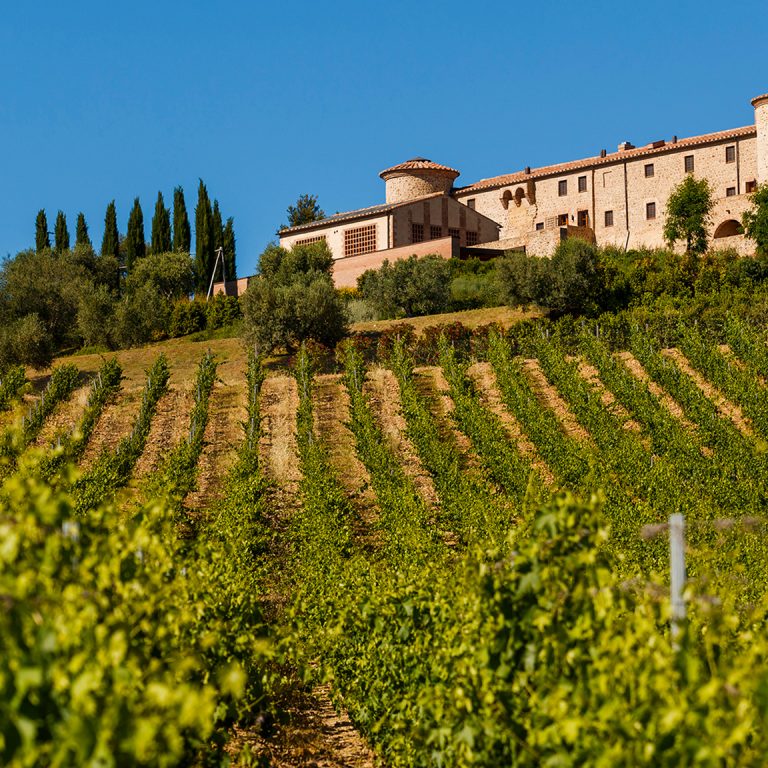 
Fans of Tuscan Sangiovese should add Montecucco to conversations involving its inland neighbors to the north—Vino Nobile, the Chiantis, and Montalcino. Montecucco’s wines offer an insider’s take on Tuscan themes and solid value, led by Castello ColleMassari, which is growing some of the region’s oldest Sangiovese as well as Montecucco’s very first Vermentino.

In 1999 a love of Tuscany led siblings Claudio Tipa and his sister Maria Iris Bertarelli to Montecucco’s ColleMassari castle, originally built in the 8th century as a fortified structure to hold the town’s grain. Then from the 13th century it was a homestead of area nobility before it fell into ruin—along with its small vineyard of Sangiovese. With precision and passion, the Swiss-Italian Tipa-Bertarelli family has been producing some of Tuscany’s highest-quality wines ever since, acquiring several of the region’s most defining wineries and establishing themselves as custodians of its traditions and terroirs.

As seen in Etruscan artifacts and Roman mosaics found around the estate, wine has been made here since ancient times. The 1,200-hectare ColleMassari estate holds 120 hectares of low-yield vineyards and nearly 90 hectares of olive groves (three trees are 900 years old). Key parcels include the 50-year-old Sangiovese vines that came with the estate, plus—to a larger extent—clones of this Sangiovese were planted at the winery, along with Vermentino vines first planted in 2000.

ColleMassari has been organic since the beginning (as are the majority of Montecucco’s producers); the estate is certified organic by ICEA and also has NOP authorization. Winemaker Luca Marrone extends those sustainable practices into an equally respectful enological philosophy, working in a multi-floor, gravity-flow winery and cellar was dug into bedrock in 2003. Grapes are hand-harvested and spontaneously fermented; for its cru wine, Poggio Lombrone, Marrone relies on fermentation in small oak vats with daily manual punchdowns.

ColleMassari vineyards sit more than 1,000 feet above sea level, directly across from Montalcino to the north, but 14 miles closer to the Tyrrhenian Sea. That maritime influence allows them to also grow Cabernet Sauvignon achieving the ripe fruit character that is the Tuscan coast’s imprint on this French variety. Castello ColleMassari’s Sangiovese wines share Montalcino’s boldness, but with softer tannins and darker fruit.

A few of ColleMassari’s top selling wines include:

Tuscany is red-wine country, but refreshing white Vermentino is getting trendier. This 100 percent Vermentino from sandstone 985 feet above sea level is named after the river that crosses the property. With cryo-maceration followed by stainless-steel fermentation, Melacce is a crisp and intense wine with citrus and herbal notes. This white wine expresses characteristics of Sauvignon Blanc and Pinot Grigio—a best of both worlds proposition.

A blend of South-Tuscan Sangiovese with Ciliegiolo and Montepulciano, Rigoleto spends six months in barrique and casks. Ripe red fruit and black pepper in a smooth and balanced frame makes Rigoleto a by-the-glass champion.

Mostly Sangiovese, with Ciliegiolo and Cabernet Sauvignon, aged for 16 months in 40hl casks and French oak barriques for the Cabernet. Elegant and complex with cherry and dark fruit notes and Sangiovese’s famous acidity, it is a star barbecue wine.

Poggio Lombrone was one of the DOCG’s first wines after being promoted from DOC in 2011; it is entirely old-vine Sangiovese from a cru overlooking the Ombrone river valley. Fermented in open wooden vats and aged for 18 months in 40 hl casks, the wine is elegant and savory, with spiced cherry notes and silky tannins. At the estate it has earned the endearing nickname “Brunello di Montecucco.”