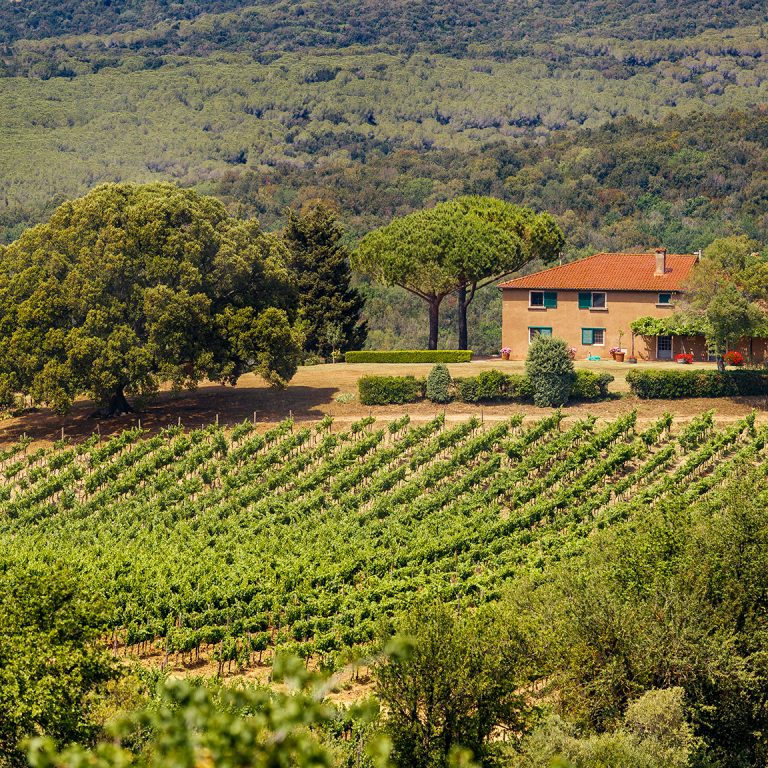 
Grattamacco was the second winery established in Tuscany’s heralded Bolgheri zone, in 1977. Today, guided by the Tipa-Bertarelli family, Grattamacco continues its pioneering spirit and insightful growing practices, going beyond the typical Super Tuscan formulas to embrace Sangiovese and Vermentino.

This content was produced in collaboration with SevenFifty and our partner, Winebow.

The Bolgheri denomination running along Tuscany’s coast is known for its Super Tuscans—big red Bordeaux varieties–based blends launched in the past century by icons such as Grattamacco, Tenuta San Guido, and Ornellaia. Founded in 1977, Grattamacco has maintained a unique link to its Tuscan roots by including Sangiovese in the blend since the first vintage in 1982. With vineyards in a fortuitously protected plot that spans one of Bolgheri’s only two hills, since 2002 the property has been part of the Tipa-Bertarelli ColleMassari Group, located about an hour away from Montecucco.

In Bolgheri, Grattamacco’s signature style of elegance over power comes from the inclusion of 15 to 20 percent Sangiovese grown at a relatively high altitude of 550 to 650 feet above sea level. A dry climate, with consistent thermal excursions that bring freshness at the end of summer to calcareous flysch soils, lets Cabernet and Merlot but also Sangiovese thrive here, giving their wines sweet tannins and a savory edge. Interestingly, more than 20 years ago, the estate was the first to plant Vermentino in Bolgheri—a varietal lead followed by many.

Under the Tipa-Bertarelli family, Grattamacco is similarly progressive on Bolgheri’s flatlands, a mere 50 meters above sea level. There in 2002 they planted—in five acres of silt and red sandy soils on the plain—Petit Verdot and both Cabernets in an ancestral octagonal pattern called settonce and trained them alberello or bush style—hence the wine’s name, L’Alberello.

Overall, the Grattamacco estate counts 80 hectares, 28 of which are vineyards, 14 of which are olive groves, surrounded by a vast woodland that moderates the Tyrrhenian sea’s winds, for a drying effect that lets the estate work sustainably. Grattamacco has been organic for more than 20 years certified by Italy’s Institute for Ethical and Environmental Certification (ICEA).

With a low yield of three tons per acre, all their grapes are hand-harvested, then fermented spontaneously by winemaker Luca Marrone  in open vats of 7hl conical oak or stainless steel depending on the wine, with long macerations of around 25 days. Today’s blends match Grattamacco’s original proportions, and for aging them Marrone relies on a mix of barriques, from new to third passage.

The three most important Grattamacco wines imported into the U.S. by Winebow are:

The first wine to include Bolgheri on its label, it is 60% Cabernet Sauvignon with Cabernet Franc and Merlot, plus Sangiovese for a fresh balsamic finish—each fermented in stainless steel, then aged 10 months in French oak and blended.

Made from the estate’s single vineyard on the Bolgheri flatland, this cofermented bush-trained Cabernet Sauvignon, Cabernet Franc, and Petit Verdot is rich and intense with leather and coffee notes on a foundation of black fruit.

Grattamacco’s iconic cru is 65 percent Cabernet Sauvignon, 20 percent Merlot, and 15 percent Sangiovese for a juicy, elegant wine with silky tannins and black fruit, tobacco, and rosemary notes. A blend of selections from the best barrels, it is aged 18 months in barrique.