The first grapevines in South America were planted in Peru in the 1540s. Over the course of the last several centuries, frequent waves of immigrant winemakers have time and again changed the landscape of South American wine production—Spanish and Jesuit missionaries in the 16th through the 18th centuries and Italian, French, German, Portuguese, and Spanish immigrants of the 19th and 20th centuries, all of whom brought different grape varieties and vinification techniques to the continent. In the last 20 years, however, as exports have increased, the trend in the South American wine industry has been to concentrate on a handful of single varieties. Argentina has Malbec (making up 20 percent of the country’s production), Chile has Cabernet (30 percent), and Uruguay has Tannat (27 percent). These three varieties dominate production and lead each country’s wine exports.

The industry’s focus on these particular varieties would seem to suggest that the Southern Cone has only a handful of grapes, but that couldn’t be further from the truth. There is, in fact, a wealth of vine diversity in South America, and winemakers are beginning to put some of the continent’s weird and wonderful—and until now forgotten—varieties back on the map.

In Argentina, it’s old-vine Semillon—more than 700 hectares of plantings—that’s causing the major buzz among critics and consumers, but winemakers are also looking to old vines of Tempranillo, Chenin Blanc, Bonarda, Criolla Chica, and Criolla Grande, among others. The reevaluation of Criolla varieties (grapes brought by the Spanish in the 16th century that have given way to numerous local varieties), in particular, is also happening farther north, in Peru and Bolivia. Most of the old vines there are Criolla varieties that have been used for local brandy production—Pisco and Singani, respectively—until recently. Winemakers today are turning their efforts toward championing these varieties and their ability to yield high-quality and unique local wines.

In Chile, the Criolla revival has taken the strongest lead with Criolla Chica, or País, which has become a staple on wine shelves again. As País moves into the mainstream, wine producers are experimenting further with historical varieties that had fallen into obscurity.

Chile’s fairytale rediscovery of Carmenère 24 years ago (the Bordeaux variety was presumed extinct until more than 10,500 hectares of it, which was wrongly identified as Merlot, were discovered) represents just the tip of the iceberg when it comes to unusual varieties growing largely unnoticed in old vineyards. Recent research in six subregions of Bío Bío found no fewer than 120 varieties growing there, with more than two dozen entirely new grape varieties.

“Of the 120 varieties, 62 were extremely uncommon, and 26 were unknown varieties—never recorded before,” explains Juan Ledesma, the winemaker of Viñas Inéditas, who led the research and is producing wine from some of the unusual varieties this year. “I’ve spent 10 years exploring and researching the varieties here,” he says, “and I’m still finding novelties all the time. There are hundreds of varieties in Chile that aren’t properly identified. Itata and Bío Bío are a time capsule for world viticulture.”

The phylloxera-free conditions in Chile have preserved relics of uncommon and rare varieties (which were wiped out elsewhere) in small grower vineyards. The Chilean wine journalist Alvaro Tello, who’s been researching old vines across the country, has found grape varieties preserved from all the major periods of Chile’s wine history.

“It’s incredible,” says Tello. “We still have the grape varieties from the Jesuit period [16th to 18th centuries], the varieties brought in by the French technicians in the 19th century, and those that were brought in by the Basque, Swiss, Italian, and many other immigrants during the 20th century.” 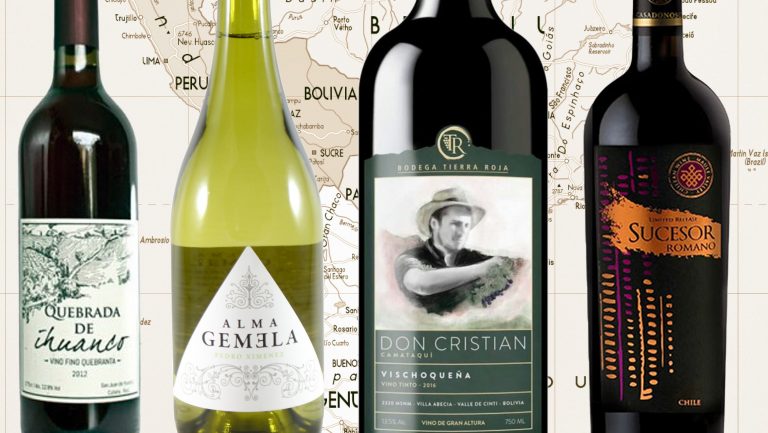 He emphasizes that every valley in Chile has its own particularity. In Marga Marga, in the Aconcagua wine region, Tello explains, Torrontés, Pinot Blanc, País, and other grape varieties brought by the Jesuits have been discovered. “In Colchagua,” he says, “there remain many old Italian varieties. The fingerprint of Chilean wine is being revealed, and there is an enormous diversity here. We still haven’t discovered everything …”

Of the old-vine varieties that have been rediscovered in South America so far, here are five that should be on your radar:

The most planted white variety in Argentina, although it remains seriously under the radar, is Pedro Giménez (not to be confused with the sherry variety Pedro Ximénez, though it’s often spelled the same), which was first planted by Spanish colonists in the late 16th century. At one point Pedro Giménez was the most planted of any variety in Argentina. While it has been in sharp decline for the last two decades, 10,700 hectares of plantings remain, mainly for the production of cheap table wines; a new generation of winemakers, however, is beginning to champion this uniquely Argentinean variety.

“This Criolla grape is very old for Argentina,” says Mariana Onofri, a sommelier and the winemaker for Alma Gemela. Onofri makes an aromatic, lively, and crisp version of Pedro Giménez from the region of Lavalle. “It’s a very generous and versatile grape, but it’s a grape that has been forgotten by big wineries, who never talk about it,” she says. “You can make great wines with it—and we are trying to rescue not only the variety but the historical wine regions where it grows.”

Quebranta is a cross between País and Negra Moll and is considered one of the more complex, as well as one of the finest, of the Criolla grapes. “It was born in Peru and is a true South American variety,” says Pepe Moquillaza, a producer of Quebranta wines in Ica. He adds that there are more than 1,000 hectares of the variety remaining in the country. “It is a gray [pink] grape of great quality and productivity.”

Along with Quebranta, other varieties that have historically been used for Pisco production are being reassessed for their winemaking potential as a sustainable options for the future. “Our job,” says Moquillaza, “is to recover and give value to these varieties for winemaking. These varieties are very comfortable in sandy loam terrains [common in Peru] and have adapted well to scarce water supplies.”

This ancient variety from Burgundy is also known as César. It was brought to Chile during the 19th century, and pockets of old vines exist from Maule to Aconcagua. “Romano was used in Chile historically for very high quality wines,” says Tello. It’s now being vinified as both rosé and red wines by producers like Casa Donoso and Santa Carolina. “It is one of the many grape varieties which have been here a very long time but had become totally unknown,” Tello says. “Romano was used a lot in Burgundy but disappeared after phylloxera. Yet here in Chile we can find very interesting wines being made from it.”

Béquignol is an ancient red variety that has all but disappeared in its native home of Southwest France. In Argentina, however, thousands of hectares were planted during the 19th and 20th centuries. Although it’s in sharp decline today, 600 hectares remain.

“These grapes were brought by immigrants for a reason, and we need to understand the past before looking at the vineyards of the future,” says Germán Masera, the winemaker for Escala Humana in Mendoza’s Uco Valley. Masera is making a vibrant and fresh style of old-vine Béquignol; he also makes an old-vine Malvasia, another overlooked old variety in Argentina. “These unconventional varieties deserve a revival,” says Masera. “We have to recover our valuable old vines.”

Bolivia’s wine production is concentrated in the Tarija region, where most of the focus is on cultivating international varieties. But Bertil Tøttenborg, the sommelier from top La Paz restaurant Gustu, believes the most distinctive wines are coming from the Cinti Valley, from altitudes of 2,200 to 2,400 meters above sea level. “Most of the producers in this region are [making] wines in an organic, biodynamic, or natural way, with little to no chemicals in the vineyards or bottles,” says Tøttenborg. “They’ve started thinking about the more local Criolla varieties—Vischoqueña, Moscatel, Misionera, and Negra Criolla—which have been in Bolivia for a very long time.”

Producers in the Cinti Valley like De la Villa, Los Baguales, Cepa De Oro, and Tierra Roja are focusing particularly on the Vischoqueña grape and are trying to determine its potential for quality. Vischoqueña is “a light grape with thin skin and light color, like Pinot Noir,” explains Tøttenborg. “The aromatic profile is intense and full of red berries and red flowers, and the palate is very floral. This is the variety many producers are beginning to plant more of.”

Amanda Barnes is a British wine writer who since 2009 has been based in South America, where she specializes in the wines and regions of Argentina, Chile, Brazil, and Uruguay and writes the South America Wine Guide. Ever footloose, she is currently on a mission to travel Around the World in 80 Harvests.

With the recent explosion of consumer interest, industry pros shed light on where the no- and low-alcohol wine category is headed, why to buy it, and how to sell it

During a time of change, the wine industry is once again proving its resilience. Here are the key trends shaping the wine world in the year to come

A look at our most-read wine features of the year, from new research about wine headaches to the case for sommeliers’ impact on restaurant profits

As small producers in California, Oregon, and Washington sharpen their focus on this niche grape, the West Coast is becoming an insider source for edgy Riesling styles