The thought of exercise—taking a jog in the morning or spending time on an elliptical—fills me with dread. There are only so many minutes in a day, and in an incredibly demanding profession, I justify the time spent at work partly as exercise. After all, as a sommelier, I’m always running around. That counts, right?

When I was a floor sommelier at Marea, a two-Michelin-starred restaurant in Manhattan, I would walk well over 20,000 steps a day. In comparison, the average American walks around 3,000 to 5,000 steps a day. Every so often, I would run up and down flights of stairs to grab wine from the lower-level cellar, averaging around 75 to 80 flights of stairs a day. That’s the equivalent of hiking up the Chrysler Building—every day.

Now, four years later, I’m the wine director and a partner at Cote in New York City. This means more sitting and looking at spreadsheets instead of sprinting between wine cellar and table. I started to wonder, how active am I? Health professionals recommend walking a minimum of 10,000 steps a day to stay fit. Was I still walking enough, or was I becoming sedentary?

To satisfy my curiosity, I invited some industry friends—52 sommeliers and wine directors from all over the United States and Canada—to participate in an informal study. While the public may sometimes perceive sommeliers as idle beasts, slowly savoring wine and fussing over vintages, I know that’s hardly the truth. In fact, I find that sommeliers can be some of the hardest-working individuals in restaurants. But would data support this view?

The sommeliers in my study all wore Fitbits or used phone apps to track the number of steps walked and floors climbed in an average workweek, from the moment they awoke to when they went to bed. I also sought recommendations—for example, which snacks and “family meals” my respondents thought best for fueling up for a shift—as well as their proven hangover remedies.

One of my key takeaways is that the number of steps walked and flights climbed vary significantly based on the design of the restaurant. Many sommeliers report that grabbing a bottle of wine involves a small journey, sometimes to a different building, and often to a different floor. In places where basement cellars are less common, such as Florida, California, and Texas, fewer stairs were climbed.

Here are a few responses that show the range of results:

Del Posto, New York City
Average daily steps: 20,029
Average daily floors climbed: 37
Restaurant layout challenge: “If you’re working in the mezzanine, there’s two flights to go down and up every time you need a bottle of wine.”
Insider tip: “Get a good night’s sleep the days before you go to work.”
Hangover trick: “Number one is drink lots of water. Even if it starts to feel painful, just get hydrated.”
Favorite family meal: “My favorite is when you luck out and they put up something like salmon with vegetables. It’s clean and delicious, and you don’t feel sleepy afterwards.”

The Ritz-Carlton, Dallas
Average daily steps: 13,146
Average daily floors climbed: 6
The physical challenge: “I can tell by the end of the night that I definitely walked a lot; my feet are usually dying.”
Insider tip: “Take a second to just relax.”
Hangover trick: “Advil and a lot of water.”
Cellar snack: “Our cookies are so addicting. I try to snack on the oatmeal-raisin ones—which is easy to do because no one else likes them.”

The Loyal, New York City
Average daily steps: 14,671
Average daily floors climbed: 27
Restaurant layout challenge: “Our [wine cellar] is downstairs, so I go up and down a lot during service. For sommeliers, we’re constantly moving. I climbed 213 floors over eight days. I wouldn’t even have imagined that—[that’s equivalent to] a pretty tall building.”
Insider tip: “Active body, active mind! Keep moving, drink water.”
Hangover trick: “Ramen and electrolytes always!”
Favorite family meal: “Fruit and salad bar are always a part of our family meal. That’s where I’m getting my vitamins.”

The Pluckemin Inn, Bedminster, New Jersey
Average daily steps: 7,428
Average daily floors climbed: 36
Restaurant layout challenge: “I work in a place with three floors and a warehouse about 50 yards from the main building of the restaurant.”
Insider tip: “If it’s a slow wine night, then clear more tables, pour more water, help out anywhere on the floor so the night will fly by and you won’t have time to think about it.”
Hangover trick: “The night before [you drink], take a Medi-Lyte electrolyte tablet with a fair amount of water.” Cellar snack: Almonds.

When I assessed my own results, I found that while I was walking less than I had at Marea, I still walked an average of 19,000 steps a day and climbed 30 floors daily.

So how does the sommelier profession compare with others? A study conducted by the American Council on Exercise (ACE) and the Exercise and Health Program of the University of Wisconsin–La Crosse reported the following in 2006:

Steps walked in an eight-hour day: 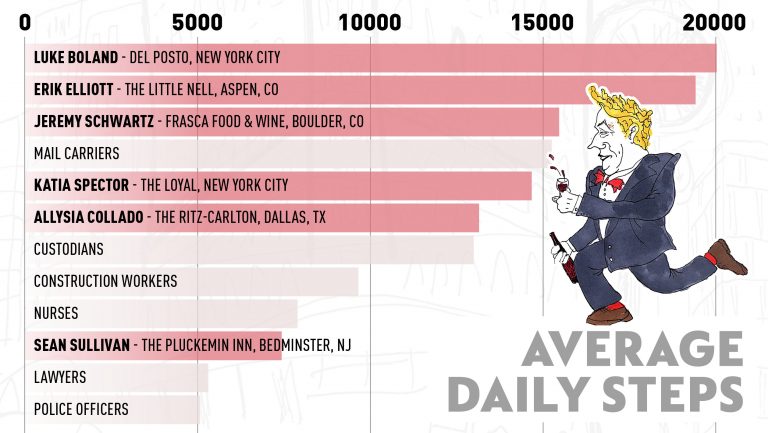 So despite the perception that a sommelier’s job is cushy, it turns out to be pretty rigorous. On average, we walk just as much as mail carriers, while climbing the equivalent of Manhattan’s iconic Flatiron Building—21 flights—or more, every day we work. My informal study didn’t even begin to account for the other rigors of the job. The cellar work alone, lifting heavy wine boxes and putting away deliveries, taxes a somm’s back and arms and raises the heart rate.

For those outside the profession who are keen to work as a sommelier, know that it’s not a career of glamorous ease. Based on the data I collected, I’m comfortable stating—without reservation—that sommeliers are some of the most active professionals in the country. While meeting the demands of guest and restaurant, we must find (or feign) strength and maintain composure even when exhausted.

So sommelier friends, here’s your pass: Feel free to write off your profession as exercise. Grab a bottle of water, snack on some almonds, take a moment to breathe, and keep on hustling.

Victoria James has worked in restaurants since she was 13. She fell in love with wine and at 21 became a certified sommelier. She has worked at some of the most prestigious restaurants in New York City, including Marea and Aureole, and is now the beverage director for Gracious Hospitality Management, a group that includes the Michelin-starred Cote. James’s name has appeared on many no­table lists: Forbes’s 30 Under 30, Zagat’s 30 Under 30, Wine Enthusiast’s 40 Under 40, and Wine & Spirits’ Best New Sommeliers; the Back Label declared her New York’s Youngest Sommelier. She is also the author of DRINK PINK, A Celebration of Rosé (2017, HarperCollins) and a contributor to Cosmopolitan, Munchies, and The Daily Meal. In her free time, she makes amaro from foraged plants.

How forward-thinking industry veterans are bringing wellness—from a health podcast to mindfulness training, yoga, and gardening therapy—to the forefront

Drinks professionals share their plans for community building, creating opportunities for diversity, and more in 2019