In our Importer Intel series, we interview importers about how they broke into the business, built up their portfolios, and navigated challenges along the way.

Although Monika Caha was born and raised in Austria, it wasn’t until she moved to the U.S. that she really fell in love with Austrian wine. “I realized in the U.S. that there’s nothing else like Austrian wine,” she says. Today, Caha is America’s de facto Austrian wine guru, working with importers and distributors like Frederick Wildman & Sons, Jenny & François, Zev Rovine Selections, and Field Blend Selections through her company, Monika Caha Selections. Along with her business partner, actor Toni Silver, Caha maintains a small but choice portfolio of some of Austria’s top producers, most of whom are hands-on, organic, or biodynamic growers working in regions from Niederösterreich to Steiermark. Caha’s portfolio represents classics like Fritsch and Nittnaus, as well as natural-leaning producers like Strohmeier and Schmelzer.

Selling wine, though, wasn’t Caha’s first career (or second, or even third). She began visiting the U.S. as a film student in the late 1970s, honing her English skills and subsequently working in the film industry, developing four screenplays while simultaneously starting an Austrian coat importing business to finance her projects. In the 1990s, Caha grew weary of the unpredictable nature of the film industry and switched gears to something slightly less risky—the restaurant business. Her Chelsea restaurant Kaffeehaus, of which she was the executive chef and owner, was one of the first Austrian restaurants in the U.S. to sell high-end Austrian wines during the period it was open, from 1993 to 2000.

Caha was on the verge of opening a new restaurant when the September 11 terror attacks took place just across the street from her downtown Manhattan apartment. The restaurant plans halted, and Caha decided to move back to Austria to regroup. She returned to New York in 2003, armed with a handful of Austrian wines and a knack for developing close relationships within the wine industry.

These days, Caha splits her time between New York and Vienna. She recently spoke with SevenFifty Daily about the evolution she’s observed in Austrian wine—and in the nature of doing business in the wine industry. In the 15 years since Caha started her company, she has seen awareness of Austrian wines grow among buyers and within import portfolios, but she has her sights set on bringing the wines of Austria into a brighter spotlight for consumers.

SevenFifty Daily: How did you break into the business?

Monika Caha: I always had this incredible connection to winemakers. My grandfather made wine, and I had contact with winemakers my whole life. So I went to four close winemaker friends in Austria and asked if I could bring their wines to the U.S. In 2003, I flew to New York and started walking into wine stores, hoping to make contacts. At Acker Merrill, Katell Pleven (who is now both the owner of The Vine Collective and the executive vice president for Verity Wine Partners) was pouring wine for Frederick Wildman & Sons, so I tasted the wines and told her what I wanted to do. She suggested that I call Frederick Wildman and ask if they were interested in tasting my wines. We set up a meeting, put together a presentation, and sent samples—and they said yes to 27 of the 30 wines I poured. It was completely luck.

What does the structure of your business look like?

When I researched the expenses involved in starting my business, I got nervous—we are a company run by two women, and we didn’t have any financing at first because I was working remotely from Vienna. We did not have the resources or the manpower of most importing companies. But this is common now, with all of the small importers in the U.S. A small importer can’t afford its own warehouse and truck. So I work with other companies to get the wines into the U.S., and I act as the liaison between the wineries and the importers. Beyond New York and New Jersey, each individual wine in our portfolio is available in a number of different states, and we are continuously looking to broaden our reach. The one wine that is available nationally is the Grooner brand that we created to bring greater recognition to the Grüner Veltliner grape.

What’s the most unexpected way you’ve found one of your clients?

I met the Nittnaus family because my mother lives two villages away from them. Many years ago, I would go and taste their wines, and eventually I became friends with them. Then I was starting my company in the U.S., and I asked them to join me. The business relationship developed from a friendship.

What was the U.S. market for Austrian wine like when you started Monika Caha Selections?

The Austrian wine business was still very small, with only a few people—mostly in New York City—selling Austrian wine. We hosted one of the first real Austrian wine dinners in the city at Kaffeehaus in 1994, and we worked primarily with Lauber Imports (now a division of Southern Glazer’s Wine & Spirits). Lauber distributed Vin Divino, which was a pioneer for Austrian wine in New York in 2003. Now their Austrian portfolio is mostly at Winebow. Michael Skurnik at Skurnik Wines & Spirits was basically running the show with Austrian wine soon thereafter, but there were a couple of others importing Austrian wine then too. The category exploded in the 10 years after I founded my company, with a lot of people getting into Austrian wine. For me, it was an opportunity, because all of a sudden people were quite interested in Austrian wine.

Name one thing that has been essential to your business over the years.

Personal connections were key to our success. From the beginning, it was like a chain reaction, with one relationship leading to the next. From that first introduction to Frederick Wildman, to the enthusiastic sales reps who are now importers themselves, it has been important to maintain those relationships over the years. Back then, it was a more personal time; very few people even had cell phones, so people were still going to tastings and speaking with one another in person.

How did you build and maintain those relationships?

It was really about the people and creating experiences to showcase the wines. Since I was the executive chef of my restaurant, I combined my knowledge of Austrian food and wine to host tastings. I invited people over in the evenings to taste our portfolio with the food that I would cook. It was kind of like a party, but we were selling wine.

How has doing business changed as technology has evolved?

Technology has taken the personal touch out of the wine business. Things have become a little too distant, and it’s harder to maintain relationships these days. When we host tastings and events, we promote the events and ask sales reps to mention them to buyers. We do mailings, but people are overwhelmed because there are too many wines and too much going on. With the amount of information out there, it has become more, “I don’t need to taste—I know all these wines.”

How is Austrian wine perceived by the consumer?

Austrian wine has never really reached the popularity with the consumer that wines of other countries have. That’s why it’s important to develop enthusiasm with sommeliers and buyers, so that when the consumer is at a restaurant, the sommelier will want to pour them a glass of Austrian wine. The problem is that these wineries come from family names—how can the consumer remember them? The labels are not visually memorable, either. That’s one of the reasons we started our own brands. 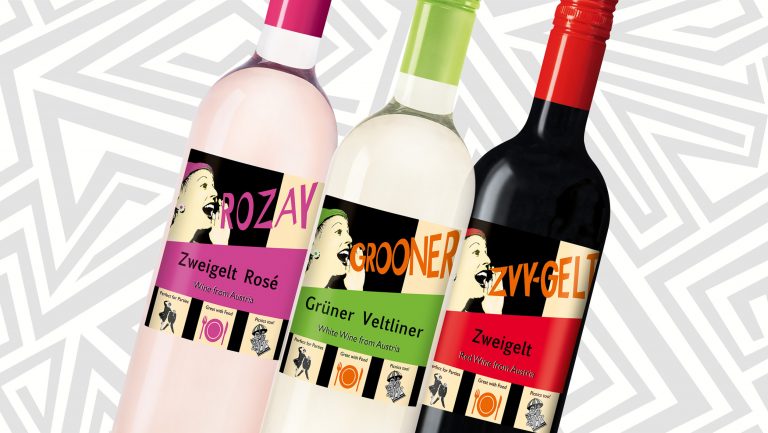 Tell us more about the inspiration for the brands that you’ve created.

We wanted to create a way for the consumer to be able to remember the grape or the label of the wine. It was my partner Toni’s idea to spell the name of the grape phonetically on the label, starting with Grooner for our Grüner Veltliner. I also asked a friend of mine to design an eye-catching label with Toni as a cartoon, and we packed the wine in 750-milliliter bottles. With the right price and the right packaging, we started having success in retail stores, so we created Zvy-Gelt and Rozay as well.

What strategies do you use to move wines in this changing market?

Nowadays, you really need to be active in every aspect of the industry, constantly reinventing yourself and doing new things. I think it’s important to reach consumers directly, since Austrian wine is still new to most Americans. I started using Instagram on a regular basis so that more people can get to know me that way, and I also do business with wine clubs. That’s a great opportunity because the wine club delivers a set selection of wine to consumers, and they have a chance to taste Austrian wine for the first time. But I still believe in the old-fashioned way of doing business—developing personal relationships. You have to use every talent you have, so I lure people in with my food for our dinner party tastings! I still think it’s effective—people meet you, like you, like your wines, and share them with others.

What do you know now that you wish you knew then?

If I knew then what I know now, I would have picked up a couple of wineries that I don’t represent! You never know what people will like. I also would’ve made better contracts with some people. But overall, I probably would’ve done things about the same.

What do you think about Austrian wine trends these days?

There is more organic farming in Austria than anywhere else in Europe, so the wines that we are bringing in are often organic or biodynamic, made really close to nature with little intervention. But in the past couple of years, there has been more sommelier interest in wines with no or very low sulfur, to the point that some buyers won’t even taste a wine if they don’t like the technical analysis of it. I understand that industrial wines have destroyed the image for wines made with sulfur, but I think small, family-made biodynamic and organic wines that use sulfur should not be pushed into the industrial category. We need to be particularly careful with wines from Austria because they aren’t as well known as those from France or Italy. Without sulfur, aromatic varieties like Riesling and Grüner Veltliner taste completely different—interesting, but different.

My worry is that if sommeliers focus only on natural wines, we will lose the other style, and that would be bad for Austria. I love all of my wines—the natural ones as much as the ones that are sulfured and filtered—and I love them too much to lose half of them. We should become a little more flexible, particularly among the younger generation of sommeliers, and focus on judging wines on how well they’re made and how good they are, without getting bogged down in technical details.

Courtney Schiessl Magrini is the executive editor for SevenFifty Daily and the Beverage Media Group publications. Based in Brooklyn, she has held sommelier positions at some of New York’s top restaurants, including Marta, Dirty French, and Terroir, and her work has appeared in Wine Enthusiast, GuildSomm, Forbes.com, VinePair, EatingWell Magazine, and more. She holds the WSET Diploma in Wines and Spirits. Follow her on Instagram at @takeittocourt.

A former development consultant working in emerging markets, the founder of Wine for the World built an import company that uplifts undervalued wine regions and winemakers