To a casual observer, a career in the beverage alcohol industry must seem like a paradise of decadent business lunches and marathon tastings of spirits, beers, and wine. Throw in a little international travel to beautiful cities and remote countryside vineyards, and the casual observer will likely ask, “To whom do I send my resume?”

However, for all the enjoyable moments and pure delights of pursuing your passion in this industry, the work can be grueling, the demands intense, and the rewards slow to arrive.

With this in mind, SevenFifty and SevenFifty Daily recently commissioned a nationwide survey of beverage alcohol professionals. The study was conducted by Wine Opinions, a leading provider of U.S. market research for the wine industry, and it focused on key issues surrounding job satisfaction, salary trends, and career opportunity.

More than 3,200 professionals responded, and the findings in the published report indicate that the industry has a lot of room for progress, especially when it comes to equal pay for women and balanced representation at the executive level for women and people of color. While certain sectors of the industry indicated higher-than-expected levels of career optimism, others showed that the grueling demands of the job are leading to troubling levels of work-related stress.

SevenFifty Daily sent an advance copy of the final survey report to leaders within the industry, to ask what they learned from the study’s findings, and to find out what changes the beverage alcohol industry should be making to provide better opportunities for all, and a better work-life balance for those in the industry. 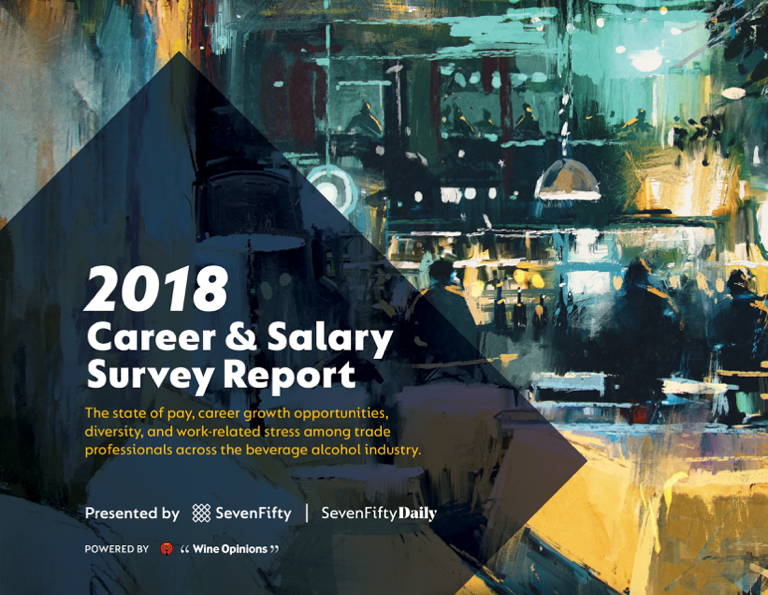 Get direct insights from over 3,200 producers, distributors, and buyers.

One of the biggest findings of the survey was how wide the gender pay gap is within the beverage alcohol industry. The survey revealed that men within the respondent pool make about $13,000 more per year than women, or roughly 16.5 percent percent more. In an age where Americans are speaking out about pay parity to a degree never before seen, progress on this front remains especially slow within the industry.

The gender pay gap is not only unfair, but it’s bad business, according to Deborah Brenner, founder and CEO of Women of the Vine & Spirits (WOTVS), an association that advocates for women in the industry through events, seminars, and forums. “It is a business imperative to close the gender pay gap, not only to retain good talent and recruit the best, but also to increase employee satisfaction,” Brenner says.

She believes that the industry cannot move forward until it acknowledges the problem and addresses it company by company. “Awareness is the first step to closing the gender pay gap,” she says. “Companies need to analyze their compensation by position, level, gender, and race.” Once those gaps are identified, she suggests, companies can then adopt sound strategies and budgets for repairing the discrepancies.

David Craver, president of the National Bartenders Association, concurs. “Male and female employees should be paid the same base wages for the same jobs.” In his sector of the industry, compensation is often discriminatory at the customer level because of tipping. He finds that “the pooling of tips for waitstaff and bartenders is a good way to achieve equality in pay.”

Underrepresentation of Women and People of Color in Executive-Level Roles

While the American workforce is close to evenly split in terms of gender (53 percent men to 47 percent women), the beverage alcohol industry skews more toward men. Roughly 62 percent of the survey’s respondents were men, and, as in the U.S. workforce as a whole, most senior leadership and executive-level roles were reported as being held by white men.

Some in the beverage alcohol industry have already taken note. In May of this year, Barkley Stuart, the new chairman of the Wine & Spirits Wholesalers of America (WSWA), made an impassioned plea for increased diversity in the industry. “If we do not ensure that diverse ideas get heard,” he stated during the WSWA convention, “we’re not doing our jobs as leaders.”

For Stuart, this survey underscores the importance of promoting diversity. “Companies that win in tomorrow’s economy must have a workforce that looks like their customer base,” he says. “And they must recognize that a diverse workforce has been proven to benefit not only employee engagement but it also directly contributes to greater success and profitability.”

To make progress on this issue, he notes, the beverage alcohol industry needs to extend more opportunities to women and people of color, and raise awareness wherever possible. “Part of my work as [the 2018-19] WSWA chairman has been taking a prominent role to spotlight challenges, successes, and future opportunities. This includes promoting the work of organizations like the Women’s Foodservice Forum, WSWA’s Women’s Leadership Council, and Women of the Vine & Spirits, among others, to provide forums for information sharing and to help equip leaders with the skills they need to forge and foster diverse teams and succeed in the marketplace.”

Bart Watson, the chief economist for the Brewers Association, a trade organization based in Boulder, Colorado, expresses concern about diversity in the beer sector as well. “I’d agree that the brewing industry also skews white [and] male,” says Watson. “We certainly think that there are ample opportunities to increase the diversity of workers at small breweries, which is one reason we’ve launched a diversity committee and hired a diversity ambassador.”

For WOTVS’s Brenner, recalibrating this imbalance within the drinks industry starts at the managerial level. “Managers play a critical role in company diversity issues,” she says, citing a separate workplace study that found people who receive advice from their managers are more likely to receive a promotion. “This is an area where sponsorship of women in support roles is crucial,” she says. “This is very different than mentorship. Good sponsors can accelerate a woman’s career by getting her noticed in the workplace.”

For the WSWA’s Stuart—who is also the executive vice president of Southern Glazer’s Wine & Spirits—enhancing diversity on the company level comes about through increased resources. “We’ve established a network of business resource groups called C.H.E.E.R.S.—which stands for Connecting, Hard-Working, Empowering, Educating, Respecting, and Serving. These groups provide resources for underrepresented populations like women, veterans, LGBT, and minorities, and are designed to promote a culture of inclusion through community service, employee engagement, professional development, and other actions that align with our culture and values.”

Every industry has work-related stress, but the Career & Salary Survey Report by SevenFifty and SevenFifty Daily reveals just how acute the pressures are in the alcohol business. Participants were asked to rate their work-related stress on a scale of 1 to 7, with 7 meaning “way overstressed.” While the mean response was 4.6, a staggering 25 percent of the total respondents stated they are a 6 or 7. Highest of all among the industry were on-premise workers and importers/distributors.

This statistic did not come as a surprise to Robert Tobiassen, president of the National Association of Beverage Importers (NABI). “A number of factors are causing this,” he says. “First, there is huge consolidation going on in the alcohol industry at all levels—producer, importer, wholesaler, and retailer. And consolidations result in employee cutbacks as part of the cost-cutting savings promised to investors.”

Within this environment of job insecurity, employees must also struggle with an ever-changing set of demands, Tobiassen notes. By its very nature, alcohol is a heavily regulated product, and state and federal laws can be complex, unclear, and dynamic, keeping sales and marketing reps on their toes.

Finally, Tobiassen underscores the unique stresses of what he calls “SKU Armageddon.” New products and new craft producers are constantly coming onto the market, and professionals need to be vigilant and highly informed to stay on top of these brands. “Simply put, all of these are stress causers,” Tobiassen adds, noting that the high-pressure nature of importing will “continue for at least the near term.”

While the beverage alcohol industry needs to make larger, quicker strides toward parity in pay and representation, there is cause for optimism, particularly in the realm of expanded education.

“I was very impressed by the degree of participation in continuing education,” notes survey author John Gillespie of Wine Opinions. “The survey shows that 90 percent of respondents hold industry certifications. Many who have achieved these levels of education are continuing to seek higher levels of knowledge,” such as through the Wine & Spirit Education Trust, Court of Master Sommeliers, and Cicerone Certification programs.

Increased education has an immediate impact on the financial stability of the industry, he says. “We have long known that it is the most ‘involved’ or educated consumers who drive the sales of higher-priced wines, so perhaps it should not be surprising that on the industry side, the level of interest in learning is also quite high.”

Stuart agrees. “One of the key takeaways of the SevenFifty and SevenFifty Daily Career & Salary Survey Report was the importance of education and industry certifications to people in our industry,” he says. This emphasis, he further notes, has Southern Glazer’s on track to reach a goal of 10,000 employees with formal wine and spirits training, something that he strongly believes will better serve its customers in the short and long term.

Craig Purser of the National Beer Wholesalers Association also underscores the increased importance education plays in his sector of the beverage alcohol industry, which employs 135,000 people in the U.S. “Many distributors,” he says, “offer professional development for employees, including encouraging Cicerone training.”

The Survey Report establishes a clear snapshot of where the beverage alcohol industry is today. To make progress in the realms of equal pay and opportunity as well as work-life balance, the industry now has thorough data to look back on for trend analysis.

“This study lays a very comprehensive and detailed baseline of compensation and other work-related issues and challenges across the tiers of the beverage alcohol industry,” says Gillespie. “Tracking studies in the future could provide trend data and insights across the years.”

Correction: An earlier version cited an incorrect figure for the industry’s gender pay gap percentage. It is 16.5 percent.

Kevin Day is a wine writer and photographer based in Colorado and the founder of the wine website Opening a Bottle. He is an Italian Wine Scholar with Highest Honors and a member of the International Association of Culinary Professionals. Follow him on Instagram and Twitter @openingabottle.

Bar Convent Brooklyn 2022 highlighted the need for suppliers to respond to the shifting realities of today’s industry, whether that’s the escalating climate crisis or channel strategy in flux