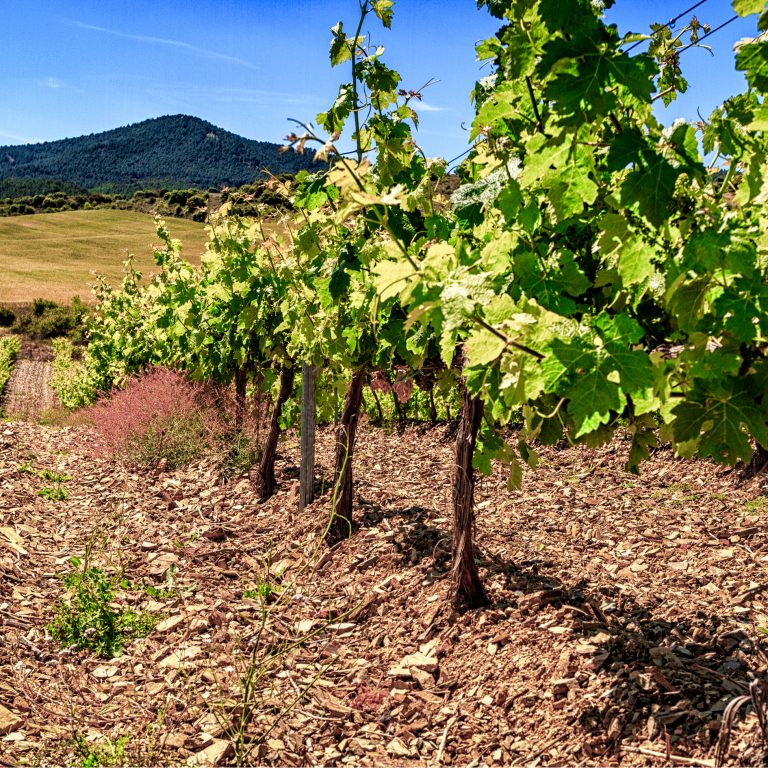 It may be one of Spain’s lesser-known wine regions, but interest in Cariñena is on the rise. Local winemakers have recently captured the attention of international wine professionals and consumers alike, and increasing demand for their single-varietal and blended wines has prompted producers to focus on new bottlings. The majority of Cariñena’s wines are made from Garnacha grapes and the region offers a diverse array of styles—from steely, aromatic wines cultivated in high-altitude vineyards to ripe, robust expressions from the lower elevations.

Spain’s second oldest officially designated wine region, Cariñena received its Denominación de Origen (DO) in 1932. Located in the northeast of the country, Cariñena is the largest of the four DOs in the greater region of Aragón. Despite being the geographic origin and namesake of the Cariñena, or Carignan, variety—and its denomination—Cariñena is now dominated by the Garnacha grape, which is also believed to have originated in the area. The region possesses the most old-vine plantings of Garnacha and Cariñena in Spain, including some that are around 100 years old.

Wine production is the main industry driving the local economy. Much of Cariñena’s population works in some aspect of the industry. There are approximately 1,500 growers, the majority of whom are employed by local cooperative wineries.

Cariñena’s extreme climate and geography are characterized by significant fluctuations in diurnal temperatures, cold, dry winds, and mixed altitudes, all of which contribute to ideal growing conditions for Garnacha vines. These days, Cariñena is best known for its single-varietal red wines, especially those made from the Garnacha grape. The region is also known for its red blends and rosés made with Garnacha, Cariñena, and other local and international varieties.

Cariñena lies about halfway between Madrid and Barcelona in the Ebro Valley and occupies an area of approximately 82 square kilometers. The land varies in elevation, rising up in the south from the Sistema Ibérico and running through the central plains to the north, where it meets the Pyrenees.

There are 14 main wine-growing areas:

Approximately 50 percent of the vineyards are planted with Garnacha. It’s quite common to find 30- to 40-year-old vines in Cariñena, while some of the oldest date back more than a century. Older vines produce less fruit, but their grapes yield more complexity and more concentrated flavors than those grown on young vines. Forty percent of the vines here are more than 20 years old. Plantings of white-wine varieties like Macabeo, Garnacha Blanca, and Chardonnay account for about 15 percent of the total vineyard area.

Cariñena’s climate is continental, with cold winters and very hot summers. It is moderated by the region’s proximity to the mountains, with vineyards closer to the ranges receiving greater annual rainfall averages, particularly during spring and summer storms, than those on the plains. The areas near the mountains receive approximately 350 to 400 millimeters of rain annually. Wind, which is common in the area, also helps moderate the semiarid climate, particularly the cold, dry cierzo wind, which blows from the north and helps keep the vines healthy by reducing the risk of mildew and rot. The temperature in the vineyards tends to change dramatically from day to night, with shifts of up to 40 degrees in a single day, which slows ripening and softens tannins.

Miocene clay soils are predominant in 80 percent of the DOP. There are four main types:

The foothills contain rocky substratum soils, which make it difficult for growers to use agricultural machinery; grapes from these vineyards therefore tend to be harvested by hand.

The region has some alluvial soils as well, resulting from the sedimentation of the Jalón and Huerva rivers. These soils are typically found in the areas of Almonacid de la Sierra, Alfamén, Muel, Mezalocha, and Villanueva de Huerva.

Cariñena was established by the Romans in 50 BC. Its winemaking history officially began in the 15th century. In 1415, King Ferdinand I of Aragón declared by royal proclamation his preference for Cariñena wines “above all others.” The wines were recorded on a list of supplies intended to accompany the king on a journey to Nice.

Spanish and foreign travelers made reference to the wines from the region in early documents, including a chronicle of Enrique Cock that recounts how King Philip II of Spain was welcomed in Cariñena in 1585 with two free-flowing fountains of wine, “one white and the other red, from which whoever drank who wished to.” Later, in 1696, the region’s winegrowers began enacting formal quality control. They approved the Statute of the Vine, which monitored yields and designated specific vineyard areas for cultivation.

Toward the end of the 19th century, phylloxera attacked European vineyards. Up to 90 percent of them would be destroyed over the course of 20 years, but for the most part, Cariñena’s vineyards escaped unscathed. In 1909, King Alfonso XIII of Spain awarded the region a city charter commending local growers for their role in helping European vineyards recover from the blight. In 1887 a narrow-gauge railway line was opened between Cariñena and Zaragoza, enabling winegrowers to export production from the region. In 1891 the first national wine congress celebration was held in Zaragoza.

In 1932, Cariñena became the second wine region in Spain to receive a DO classification. The designation paved the way for expanded cultivation and the implementation of new manufacturing techniques. However, the ensuing Spanish Civil War—and its fallout—affected the quality and reputation of Cariñena’s wines for many years.

Quality and production improved again in the 1970s, around the time that the wines began being bottled. With the addition of new systems of cultivation and modernized production practices, as well as investments in technology, another qualitative leap in manufacturing took place during the 1980s.

The region’s other most significant producer, Grandes Vinos y Viñedos, was established in 1997. In 2011, Cariñena became a Denominación de Origen Protegida (protected denomination of origin, or DOP). The region launched an awareness campaign in 2012, El Vino de las Piedras (Wine from Stones), which led to a 15 percent growth in exports to 48 countries—an all-time high for the region.

Designations indicating how long Cariñena DO wines have been aged in oak and bottle:

Many of Cariñena’s wines are made with 100 percent Garnacha, though a number of single-varietal wines are also produced with the Cariñena grape, as are blends that feature Cariñena and other local and international grapes. About 87 percent of the grapes grown in the region are red varieties, while just over 12 percent are white varieties. All approved red varieties are permitted for use in the region’s rosé wines. Approximately 642,055 hectoliters of wine were produced in 2016.

The most widely planted grape in Cariñena, Garnacha (also known as Grenache), accounts for about 32 percent of the wine produced in the region. It’s an early-budding and late-ripening variety that tends to be resistant to drought and rot, and it’s well-suited to the arid growing conditions of the area. In addition to being used in varietal wines, it’s often blended with Cariñena, Tempranillo, and Syrah. It has soft tannins and mild acidity, though the grapes grown in the higher elevations of the region express higher acidity, more minerality, and more intensity. Garnacha typically yields wines that are full bodied, fruit forward, versatile, and food friendly, with raspberry, black cherry, strawberry, herbal, and smoky notes.

Before Garnacha supplanted it, the Cariñena grape (also known as Mazuelo and Carignan) was the star of the region. But despite originating here, the grape is difficult to cultivate in the region’s extreme growing conditions; it’s a late-ripening variety that tends to be susceptible to disease. However, some producers in the region are bringing it back into the fold as a varietal wine—it’s often used as a component in regional blends. Nearly 5 percent of the wine produced in the region is made with this variety. Cariñena is a full-bodied wine that offers vibrant acidity, strong tannins, deep color, and notes of plum, cherry, berries, and spice.

Cariñena may not have the recognition of neighboring regions like Rioja, Ribera del Duero, and Priorat, but the region’s producers are becoming known for their commitment to quality and rigorous standards both in the vineyards and in the cellar. And because it’s still largely under consumers’ radar, the region does offer exceptionally good quality wines at immense value.

Sustainable winemaking practices are becoming increasingly popular. Winemakers are also experimenting with fermenting and aging select parcels in a range of vessels, such as amphorae, cement vats, and French oak puncheons, which yield delicious expressions of Garnacha and Cariñena in particular.

Today most of Cariñena’s wines are produced by three co-ops: Bodegas Paniza, Bodegas San Valero, and Grandes Vinos y Viñedos. These producers employ a large number of people from the community. Younger generations are moving back to the region to participate in the burgeoning wine industry.

However, younger generations aren’t always able to take on the preservation of their families’ vineyards. To manage this challenge, the wineries have enacted programs to ensure that the region’s legacy vineyards continue to be cultivated. Even vineyards that have been neglected for several years are being brought back into production through intensive restoration efforts. This ensures that the region will continue to benefit from high-quality grapes that come from well-established vineyards.

In an effort to raise awareness of the region and its offerings, Cariñena wines are being promoted internationally through innovative campaigns like El Vino de las Piedras (Wines from Stone), The Next Great Grape, and Wine Region to Watch. Approximately 67 percent of Cariñena’s wine is exported. Key markets include Germany, the U.K., Canada, China, the U.S. and Russia. The U.S. is among the region’s top 5 export markets, with exports increasing 400 percent since the 1990s. Approximately 2.2 million of the 27 million bottles exported worldwide in 2019 were sold in the U.S. market.