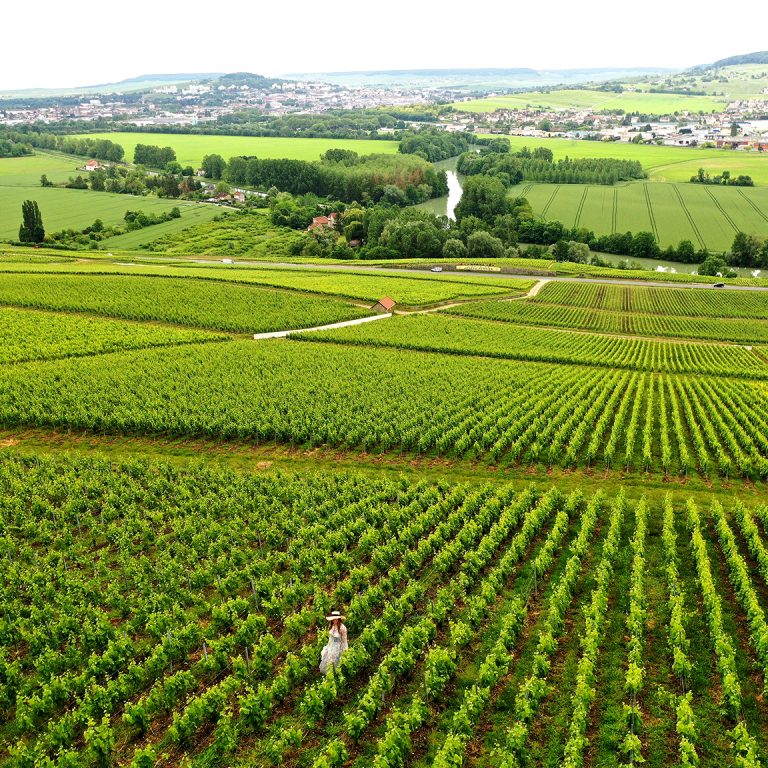 There is no wine more storied than Champagne. While the name is misused by some in the United States, only sparkling wines produced from grapes grown in the Champagne region of France can be called Champagne. As the embodiment of quality, innovation, prestige, and celebration, this unparalleled category’s centuries-old reputation has been well earned. Cultivated in the chalky soils of northeastern France, Champagne must be produced using the traditional method (méthode Champenoise)—a vinification process invented in Champagne and characterized by a secondary fermentation in the bottle. The Comité Champagne, which represents all the region’s growers and houses, created an online course to share its knowledge on the place and famous wines produced there.

This advertising content was produced in collaboration with our partner Comité Champagne.

The term “Champagne” has been protected in France since 1845; it’s a protected designation under EU law. Champagne can only be applied to sparkling wines produced within the Champagne Appellation d’Origine Contrôlée (AOC), a delimited area, in accordance with methods and limitations set forth under French law, including the region’s signature méthode Champenoise (also a protected designation).

Today, more than 120 countries protect the name. However, the name continues to be misappropriated by some sparkling wine producers in the United States. All other sparkling wines that use the same production method as Champagne should use the term méthode traditionelle on their labels.

By strictly limiting production through the management of grape yields and press yields each year—and by constantly innovating—the region is able to maintain the highest quality standards, even in the face of serious challenges such as climate change.

Champagne represents 0.5 percent of world vineyard acreage and 4 percent of France’s total vineyard area. There are 16,100 winegrowers, 360 houses, 140 cooperatives, 4,500 producers and 1,800 exporters working in the region. Growers operate 90 percent of the vineyards, while houses export 70 percent of Champagne volume sold.

The region has 319 crus (villages) and is made up of an array of micro-vineyards, each with its own climate, soils and topography. There are 34,300 hectares under vine.

While the northerly region’s cool temperatures help create the revered high acidity in its grapes, Champagne also experiences cold, harsh winters. Winter frosts can destroy new buds and vines. Spring frosts can also wreak havoc on new buds, especially if the frost hits during budburst. Summer hail can be a threat to vines and clusters. In general, the region gets a fair amount of rainfall and temperatures tend to remain on the cooler side throughout the year.

The limestone subsoil in Champagne is primarily chalk-based, containing many tiny skeletons of marine micro-organisms and mollusk fossils. It absorbs heat during the day and provides good drainage for the vines in the wet climate, helping to support the grapes in developing a balance between ripeness and acidity. In addition to contributing to stellar wines, the chalk has yielded a large network of underground caves that provide ideal storage conditions for producers to age wines.

Likely planted by the Romans, the earliest known wine-producing vineyards in Champagne were planted in the 3rd to 5th centuries. From the 5th to 9th centuries, clergy and religious orders began putting roots down in the wine industry.

The wines of Champagne have long been enjoyed by French nobility and the monarchy—ever since the baptism of Clovis in Reims, when he converted from Paganism to Catholicism, events that marked the birth of the kingdom of France. It was as a result of this association that Champagne became known as “the wine of kings and the king of wines.” All French kings were crowned in Reims from 816 onward. It’s said that Champagne flowed freely at the coronation banquets. In fact, it grew into such a hallmark of the region that it became customary to offer Champagne to all royal visitors.

In the 17th century, religious figures including the Benedictine monk Dom Pierre Pérignon, who was a cellar master in the Abbey of Hautvillers, devised several production methods that are still used today. The region’s first Champagne house was established in 1729.

The 19th century saw a series of technical advancements, involving bottle-fillers, corking, dosing, and bottle-rinsing technologies. In 1845, the use of the name Champagne as a generic label for sparkling wines was banned by the Cour de cassation (the French equivalent of the U.S. Supreme Court). It was decreed in 1887 that the term would only refer to wines exclusively produced in—and sourced from—the province of Champagne.

Champagne earned its AOC designation in 1927. In 1941, the trade association Comité Interprofessionnel du Vin de Champagne (Comité Champagne) was established to represent the interests of all the Champagne growers and houses. The Comité was one of the first of its kind in France. Since its founding, many other trade associations have been modeled after it.

More recently, the region’s legacy was formerly recognized by UNESCO. In 2015, the organization designated the hillsides, houses, and cellars of Champagne a World Heritage Site.

The Champagne AOC is the primary appellation in the region. Its regulations not only encompass geographical delimitations, but also climate, vineyard management, winemaking techniques, and labeling.

Winemakers producing wine under the Champagne AOC must adhere to stringent rules including:

The minimum aging periods for maturation on the lees are 15 months for non-vintage and three years for vintage cuvees. These periods are longer than what’s typically required by law for other sparkling wines.

Champagne has a unique reserve system to regulate the potential variation in annual yields. Winemakers collectively maintain reserve stocks as a type of insurance against a poor year of crops (or a period of exceptionally high demand). In good vintages, all producers are required to set aside a percentage of their wine to be held in reserve. The wines are then stored in temperature-controlled tanks overseen by the Comité Champagne. There is currently the equivalent of 226 million bottles of Champagne in reserve.

Apart from Champagne, the region also produces two still wines which are given the designation Coteaux Champenois Appellation d’Origine Protégée (AOP): Coteaux Champenois (either red, white, or rosé) and Rosé des Riceys (rosé produced in the village of Les Riceys).

The primary grape varieties in Champagne are Pinot Noir, Meunier, and Chardonnay.

The most widely grown grape in the region, Pinot Noir accounts for 38 percent of plantings. It yields distinctive notes of red and dark berries, richness, complexity, and structure. Pinot Noir also adds backbone and body to blends. It’s the dominant variety of the Montagne de Reims and the Côte des Bar.

A robust, weather-resistant grape that sees late budbreak (and therefore is less vulnerable to frost), Meunier makes up 31 percent of the plantings. Meunier is a great pairing partner, contributing dark fruit flavors, floral, herbal, spice, earthy, and meaty notes, as well as roundness and suppleness to blends. It’s especially well suited to the more argillaceous soils found in the Marne Valley. It’s sometimes also vinified as a single-varietal wine.

Note: While the grape is sometimes referred to as Pinot Meunier, the Comité Champagne prefers the term Meunier because it more accurately reflects a discovery by the French National Institute for Agriculture and Wine Research team (INRA) made about 20 years ago that Meunier is a completely distinctive grape variety from the Pinot family.

Accounting for 31 percent of plantings, Chardonnay is king on the Côte des Blancs. It gives wines that are elegant, delicate and fragrant with citrus, stone fruit, and floral notes. Chardonnay also sometimes brings an edgy minerality to Champagne. It can also bring a level of finesse to the wine. Chardonnay-driven Champagne wines tend to be the most age-worthy.

Additional varieties authorized in the Champagne AOC are: Arbane, Petit Meslier, Pinot Blanc, and Pinot Gris. Together they comprise 0.3 percent of all plantings.

Most Champagne wines are blended. The blenders artfully combine wines with different sensory characteristics to create a single wine that’s designed to be greater than the sum of its parts. Most Champagne wines are a blend of the three main grape varieties, various years and crus (villages), but they can also be produced as Blanc de Blancs (made with 100 percent white grapes, mostly Chardonnay) or Blanc de Noirs (made with either, or both, 100 percent Pinot Noir and Meunier). These wines are crafted to express the distinctive qualities of a single cru (vineyard), a lieu-dit (named vineyard plot), or a clos (walled vineyard).

Most Champagne is a white wine made from both white and black grapes, but these iconic wines can also be vinified as rosés. Additionally, they can be produced with varying levels of sweetness (dosage), ranging from brut nature (bone dry) to doux (sweet), depending on the level of dosage added. Dosage is the addition of a small amount of a liquid mixture of sugar and wine, which contains 500 to 700 grams of sugar per liter. It’s added to Champagne just after disgorgement. The driest wines don’t receive any dosage, but most receive at least a small amount to help balance the wine.

The tiny, sustained, delicate bubbles in a glass of Champagne speak volumes. Distinguishing between pétillant (sparkling), which connotes bubbles fizzing at the surface, and mousse, which describes a creamier confluence of bubbles, the wine professionals of Champagne prefer the term effervescence to describe the distinctive bubbles in their wines.

Champagne continues to uphold its prestige and reputation as the most iconic sparkling wine in the world. The newly launched Champagne Massive Open Online Course (MOOC) provides exclusive, behind-the-scenes information, videos, and material designed to turn professionals and wine lovers into Champagne experts in less than five hours. There is a free classic version and a premium version (approximately $55).

Champagne wines are exported to more than 190 countries, representing 10 percent by volume of world consumption of sparkling wines. In 2019, Champagne shipped 297.6 million bottles (the equivalent of about $5 billion euros), and just over half of them (52.4 percent) were exported. The U.S. and UK are Champagne’s top export markets, having contributed 665 and 431 million euros, respectively, in revenue to the region last year.

Champagne was the first wine region to develop and implement a series of sustainability initiatives. Since 2003, it’s been working to reduce its carbon footprint per bottle by 20 percent with a goal of reducing it by a full 75 percent by 2050. It has also been working to limit the use of phytosanitary products and nitrogen fertilizers to 50 percent. The goal is to stop using herbicides altogether by 2025. Currently, 20 percent of Champagne has earned environmental certification, including 18 percent that’s certified Sustainable Viticulture in Champagne. The region hopes to be 100 percent certified by 2030.

Efforts are also underway to roll out more initiatives to support the circular economy. About 90 percent of industrial waste is already treated and recycled, and 100 percent of wine production effluents byproducts are treated and recycled. All of the region’s growers are committed to continuously improving the region’s vineyards and work toward more sustainable winemaking practices overall.