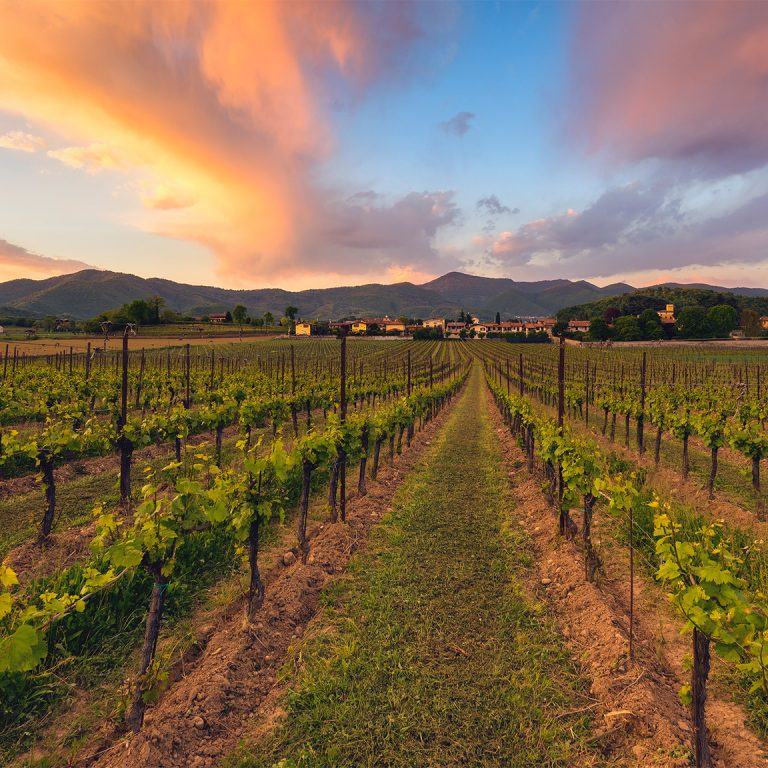 Once the country’s best-kept secret, Franciacorta has emerged as the center of high-quality, traditional-method sparkling wine production in Italy. With a remarkable range of wines that can easily be integrated throughout a meal, Franciacorta is now investing in the health and future of its vineyards through commitments to sustainability and biodiversity.

This advertising content was produced in collaboration with SevenFifty and our partner, Franciacorta.

As a commercial region, Franciacorta is relatively new: It’s about 60 years old, compared to the hundreds of years of history that other northern Italian regions or top global sparkling wine producers boast. But over that short period of time, it’s given long-established sparkling wine regions a run for their money—a fact that is unsurprising when considering that Franciacorta’s culture of sparkling wine production may actually predate most others.

An ancient history of grape-growing and centuries of sparkling wine experience have formed the foundation for Franciacorta to rise through the ranks of the world’s top traditional-method sparkling wine regions. With rigorous production standards and noble grapes, this northern Italian region has proven its ability to craft wines with remarkable stylistic diversity, complexity, and versatility. More wine professionals and consumers alike are embracing the ever-increasing range of Franciacorta wines not only as delicious aperitifs, but as phenomenal options to complement foods throughout a meal.

Franciacorta’s small area—only 20,000 hectares, about 3,200 of which are planted to vines—and strict production standards limit its output to 17.6 million bottles a year. Only about 11 percent is exported, and the U.S. is the fourth-ranked market after Switzerland, Japan, and Germany. Before the 2020 coronavirus pandemic, sales had been on a steady rise for the last decade. Though there was a slight dip in 2020, with a global reopening, the future for Franciacorta looks sparkling.

Franciacorta sits in the heart of Lombardy—one of Italy’s most esteemed regions for all things gastronomic, including its wines. Located in the Brescia province, north of the Po Valley (a rich agricultural belt), its northern vineyards border Lake Iseo, a deep, natural body of water, and one of only a few in northern Italy. As the area’s fourth-largest lake, it is a major moderating influence on the climate, which is otherwise continental.

Franciacorta is a relatively small region, spanning just 15 miles from the Oglio River in the west to the city of Brescia in the east. The climate is also influenced by its topography, including rolling hills throughout the region and Switzerland’s glacial Rhaetian Alps to the northwest, which provide shelter to the vineyards. The resulting climate delivers warm, sunny days (rainfall in the growing season averages 500 to 600 millimeters) that enhance ripening and cooler nights that preserve the hallmark acidity of the sparkling wines.

Ancient geological activity created the morainic amphitheater that helps define Franciacorta’s terroir, dominated by gravelly, well-drained soils that are extraordinarily abundant in micro- and meso-mineral content, amassed over three major geological periods. Collectively, the moderating maritime influence from both the lake and river, mountains that both cool and protect, and mineral-rich soils present ideal conditions for high-quality viticulture.

Vines have been planted on the hills of Franciacorta since ancient times, referenced by classical authors such as Pliny the Elder (a noted oenophile), the arboriculturist Lucius Columella, and the Roman poet Virgil. As early as the 16th century that sparkling production was documented with the publication of Girolamo Conforti’s Libellus de vino mordaci (“Dissertation on Sparkling Wine”).

Fast forward to the 1950s, when vintner Franco Ziliani was the first to realize the potential of the local sparkler for the commercial market. They coined the name Franciacorta for the wine, and by 1961 launched a limited production of 3,000 bottles. Its success created both a movement and a category for Italy: Only six years later Franciacorta would become a DOC, and by 1995, it achieved DOCG status—the first traditional method sparkling region in Italy to be so designated. In the same year, Franciacorta created the Satèn (Italian for “silk”) designation for one of its signature styles—a glossy, creamy, elegant style unduplicated elsewhere.

Here, Chardonnay is king, accounting for approximately 80 percent of planted vines. It’s a major player in most of the blended wines, and in particular, Franciacorta Satèn. Franciacorta’s more temperate climate gives Chardonnay a yellow-fruit roundness that can take on tropical notes.

Comprising about 16 percent of the region’s vineyards, Pinot Noir—locally called Pinot Nero—is the structural backbone of the blends. As in other regions where it’s planted, it’s finicky in Franciacorta.

A genetic mutation of Pinot Nero, the variety (three percent of vines planted) contributes floral and citrus aromas to the blend, and may comprise up to 50 percent of the wine.

An ancient indigenous variety, Erbamat (“crazy grass”) was officially added to the region’s accepted blending grapes in 2017. A late-ripening white grape, it is marked by acidity, and up to 10 percent is permitted in the blend for all styles except for Satèn. Twelve wineries are experimenting with the grape, which comprises about one percent of plantings.

Though Franciacorta is largely considered a traditional-method sparkling wine, the region’s production standards and distinct styles differentiate it, with some referring to the production process as the “Franciacorta method.”

Grapes for Franciacorta are cultivated in delimited vineyards across 19 communes and must be hand harvested between Aug. 10 and Sept. 10, barring unusual weather conditions affecting the vintage. They are also subject to DOCG yield restrictions and gentle grape-pressing techniques.

In the cellar, the standards for aging are some of the highest in the world among the world’s top traditional-method sparkling wines, and many producers opt to hold their wines for longer, to increase complexity and texture while further distinguishing their wines from other popular Italian sparklers.

Non-vintage Franciacorta cannot be released until at least 25 months after harvest, of which 18 months must be on its lees in the bottle. It can be made in all the dosage styles, and the bottle pressure is typically 5 to 6 atmospheres.

Produced exclusively as a brut wine and with 5 atmospheres of pressure or less, this a unique regional style, always made as an elegant blanc de blancs. It is usually 100 percent Chardonnay, though some Pinot Bianco is permitted, and it spends at least 24 months on its lees prior to release.

This is composed of Chardonnay, at least 35 percent Pinot Noir, and up to 50 percent Pinot Bianco. Like Satèn, it spends 24 months on its lees before release.

Also known as millesimato, at least 85 percent (but usually all) of the wine comes from a single year of particularly high quality. It must age at least 30 months on its lees.

The pinnacle of Franciacorta styles, Riserva spends at least 60 months on its lees before it is released.

Franciacorta has become a region committed to biodiversity, and it is a champion of sustainable viticulture with more attention to low-intervention methods and reduced fertilization through crop cover and other natural management. Today, more than 71 percent of vineyards are organic.

The consortium has also led the way in assessing the carbon footprint of viticulture and vinification with the creation of Ita.Ca, a model for measuring and monitoring greenhouse gas emissions from three sources: fossil fuels, imported electricity, and material production processes and waste disposal. The program is the first of its kind in Italy.

Franciacorta has also embarked on a study to identify arthropods—a reliable indicator of soil quality—present in the region’s soils. The study culled samples from 100 different vineyards over a period of five years with the goal of recommending agricultural methods to enhance the health and longevity of vines.