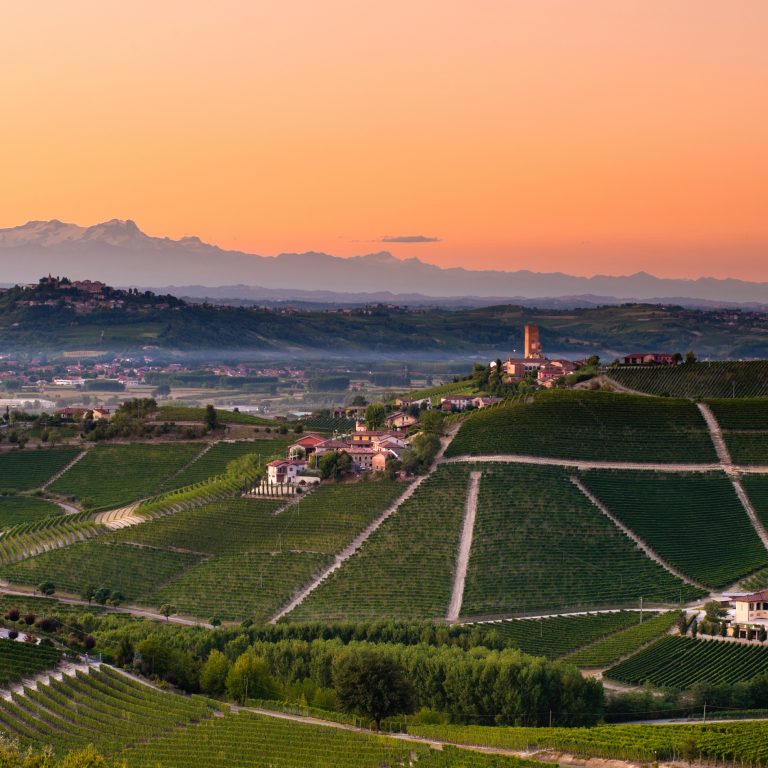 Piedmont is Italy’s second largest geographical region and the country’s seventh largest wine-producing region. Approximately 45,000 hectares of Piedmont’s 25,399 square kilometers are under vine. Piemontese wine makes up 5 percent of Italy’s national production and almost 18 percent of the country’s total exports. Most of the region’s wine comes from small vineyards in which the growers also make the wine. In Barolo and Barbaresco, the region’s most revered winemaking areas, the average vineyard is only about five acres with an output of approximately 10,000 bottles a year. –by Jen Laskey

Situated in the northwest, Piedmont shares borders with France and Switzerland. The region’s Italian name, Piemonte, translates to foot of the mountains, which is a fitting descriptor for its subalpine location and the fact that it’s surrounded by mountains on three sides—the Alps in the north and west and the Apennines in the south.

There are two distinct winemaking areas in Piedmont. One is northeast of Turin in an area near Lake Maggiore. The other, which is the region’s real heartland, is located southeast of the city in the provinces of Asti, Alessandria, and Cuneo. The highest concentration of vineyards altogether is in the Langhe and the Monferrato hills. This is where the region’s most acclaimed vineyard sites can be found. The land here is strikingly dense with vines. The surface area of some villages, particularly around Barbaresco, is almost entirely planted with curving rows of grapevines.

As a wine region, Piedmont has had enormous success cultivating its own indigenous varieties. Though some international grapes like Pinot Noir, Chardonnay, and Sauvignon Blanc are planted here, the region is renowned for its red wines made from grapes like Nebbiolo, Barbera, and Dolcetto and whites made from Cortese, Arneis, and Moscato.

The mountains create a protective barrier around Piedmont and the sub-alpine foothills offer many sunny slopes for planting the region’s most-prized grape. While the sunniest aspects tend to be reserved for Nebbiolo, nearly all of the vineyards in Piedmont are planted on hills ranging in elevation from 150 to 450 meters above sea level. Very few (less than 5 percent) are officially classified as flat. The coolest sites are usually planted with Dolcetto, except in the hills southeast of Asti, where cooler vineyards are reserved for Moscato.

The most famous winemaking area, the Langhe, gets its name from the Latin word for tongue, which aptly describes the long, narrow strip of hills that make up this sub-region. The Langhe is surrounded on three sides by rivers. The Tanaro runs west and north and the Bormida di Spigno to the east.

Soils are typically made up of varying degrees of sedimentary clay, calcareous marl, sandstone, and sand. Those in the Langhe, as well as in the area around Gavi, are rich with limestone. In the Roero, soils are sandier and less calcareous. Variations in soil composition, altitude, and aspect combined with the sub-mountainous landscape contribute to a range of mesoclimates throughout the region.

Overall, Piedmont has a classically continental climate (though the area of Gavi in the southeast experiences some maritime influences from the Mediterranean Sea). The continental climate brings long, hot summers that extend into early autumn. Then temperatures drop quickly for a cool fall and cold winter. Spring is also cool and often rainy.

The area is known for the morning mists and thick fog that roll through the mountains and valleys. It’s commonly believed that the Nebbiolo grape takes its name from la nebbia, the Italian word for fog. In the Langhe, fog helps to prolong Nebbiolo’s ripening season, yielding aromatic wines that are high in acid, alcohol, and tannins with excellent aging potential.

Hail can be a particularly hazardous threat to both the quantity and quality of grapes in Piedmont. In the past, it has caused losses of up to 30 percent of an overall grape harvest. Fortunately, when hail does hit, it typically affects only a few slopes and never the entire Nebbiolo crop.

Piedmont has fostered a serious winemaking tradition since the Middle Ages. Early references to Nebbiolo wine were documented in the castle of Rivoli in 1266 and in the village of Canale in the Roero in 1303. The region’s most prized grape was also highlighted in a book of statutes in the village of La Morra in 1431, wherein a five-lire fine was imposed on anyone who cut Nebbiolo vines. (Repeat offenders were apparently at risk of getting their right hand cut off or, in more serious cases, being hanged, according to the statutes from that period.)

Formerly part of the Savoy kingdom, French influence is still evident today, particularly in the region’s cuisine and wine culture. Piedmont was a key player in the Risorgimento, leading the charge for Italy’s reunification in the 19th century. During this time, Piedmont’s wines experienced a Renaissance through the employment of French winemaking techniques and the newly emerging wine science of the day. As a result, Barolo, as we now know it, was brought to life. In 1966, Barolo and Barbaresco were accorded a registered designation of origin. Their Denominazione di Origine Controllata (DOC) status was elevated to Denominazione di Origine Controllata e Garantita (DOCG) in 1980. In 2014, a 25,000-acre portion of the Langhe, Roero. and Monferrato area was designated a World Heritage Site by UNESCO .

Piedmont focuses on two tiers of designations: DOC and DOCG. Unlike the rest of Italy, this region does not allow production of Indicazione Geografica Tipica (IGT) wine.

Established in 1963, DOC status indicates superior quality wine in Italy. There are 42 DOCs in Piedmont.

Made from Nebbiolo, the two best wines of the region take their names from the local villages of Barolo and Barbaresco, but most other Piemontese wines are named after grapes. In 2016, Piedmont’s total wine production was 2.54 million hectoliters.

This is a finicky variety that needs particular conditions to thrive. It tends to bud early but ripens late, even on the sunniest south-facing slopes. It yields wine with aromatic complexity and exceptional aging potential, especially in Barolo and Barbaresco. Barolo wines are regarded by many as Italy’s finest. They’re high in acid, alcohol, and tannins, and typically aged for long periods in oak casks or barriques. They also benefit from extended aging in bottle. A good vintage is likely to be at its best between 10 to 30 years old, though many can age 40 years and beyond. Dominant flavors include red and black fruit, violet, rose, mushroom, tar, leather, and spice. Barbarescos are lighter in body than Barolos and their fruit and flavors tend to be slightly less concentrated, though they too are robust, elegant wines.

Most Nebbiolo vines are planted in Barolo, Barbaresco, and across the Tanaro River in the Roero, where the sandy soils yield lighter, spicier DOCG wines that mature faster than their Langhe counterparts. There are also two significant Nebbiolo-based DOCs—Nebbiolo d’Alba and Nebbiolo delle Langhe—that offer more youthful expressions.

This grape is planted throughout the provinces of Alba, Asti, and Alessandria. Known for its high levels of acidity, red fruit character, deep ruby color, and relatively low tannins and alcohol, Barbera yields a broad range of styles, from bright and a little rustic, to rich and silky. The most quintessential Barberas are found in the Barbera d’Asti DOCG.

Of the three main red grapes in Piedmont, Dolcetto ripens the earliest. It makes wines that are deep purple in color and low in acid. Dolcetto has formidable tannins, but winemakers tame them with a shorter fermentation. Dolcettos are easy-drinking wines with black fruit flavors and notes of violet, licorice, and almond. They blend well with both Nebbiolo and Barbera.

A bit far-flung from Piedmont’s main winemaking area, Cortese grapes are cultivated in the lime-rich, marl soils around the area of Gavi. Gavi is both the name of the DOCG and the wine made from the Cortese grapes. Gavi is Piedmont’s most prominent still white wine. Fruity and floral with notes of apple, peach, lemon, and white flowers, this wine also boasts steely acidity and solid minerality.

Though Arneis has been grown in the Roero since the 15th century, it has only recently developed a reputation for being one of Piedmont’s finest dry white wines. This is the direct result of modern Roero winemakers devoting themselves to cultivating this fussy, low-yield grape, which is known as the little rascal in local dialect. A once obscure variety, Arneis was often planted in vineyards to help keep birds away from Nebbiolo grapes. Winemakers traditionally blended it with Nebbiolo wines to help tame their tannic bite. Arneis from the sandy, calcareous, clay soils of the Roero tend to be fruity, floral, and herbaceous with low acidity and white peach, pear, green apple, and citrusy notes.

This fragrant, floral, and sweet-scented grape has been a mainstay in Piedmont for hundreds of years. Today, there are 9,700 hectares of Moscato planted in the provinces of Alessandria, Asti, and Cuneo, making it the Piedmont’s most widely planted white grape. Moscato (also known as Moscato Bianco or Muscat Blanc à Petits Grains) yields sweet, sparkling, highly aromatic wines that are low in alcohol. There are two distinctly different types of Moscato wines in Piedmont: The slightly fizzy, lower-alcohol, artisanal Moscato d’Asti and the fully sparkling Asti, which tends to be sweeter and more flavor-forward, even though it has less residual sugar.

In addition to being a premium region for still and sparkling wines, Piedmont is the birthplace of aperitif wines like vermouth and Barolo Chinato, which is made from Barolo wine infused with quinine, herbs, and spices.

The region continues to produce top-quality vintages of Nebbiolo. While collectible vintages remain popular, there is a growing interest in less expensive Nebbiolo-based wines like Langhe Nebbiolo, as well as regional whites, such as Gavi, Arneis, and Erbaluce, made from native grapes.

Some Piemontese producers are also making strides with international varieties like Cabernet Sauvignon, Pinot Noir, and Chardonnay. The latter two are gaining traction as sparklers in the up-and-coming Alta Langa appellation. Others are parceling out portions of their vineyards for more obscure indigenous varieties like Nascetta and Pelaverga.

The current trend toward biodynamic wines and organic viticulture and vinification practices that is sweeping Europe (and the winemaking world at large) is one that is being embraced in Piedmont. Producers are decidedly moving toward more organic practices in the vineyard. They are also increasingly employing cellar practices that are intended to enhance variety tipicità—typicity—by using fewer selected yeasts and products that otherwise tend to homologate the wines.