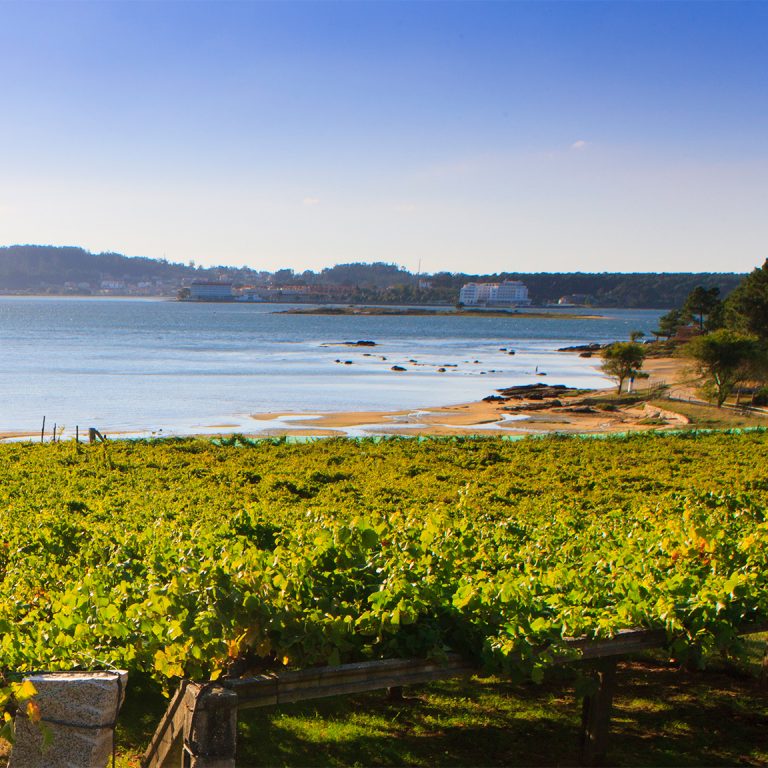 One of Spain’s greatest success stories, the reputation of Rías Baixas as the country’s top white wine region is intrinsically connected to its signature grape variety: Albariño. As Albariño gains increasing popularity among curious consumers and vintners focus on sustainable viticulture, Rías Baixas is poised to gain even more recognition in the years to come.

This advertising content was produced in collaboration with SevenFifty and our partner, Rías Baixas.

Tucked away in the far northwest corner of Spain, this Rías Baixas defies expectations of most Spanish regions. It’s verdant and green, nestled along the Atlantic coastline of Galicia. Crisscrossed by winding rivers and intersected by fjords, upon first glance, many think it more closely resembles Ireland than it does the rest of Spain.

Over the past 40 years, Rías Baixas has become synonymous with its signature white grape variety: Albariño, which accounts for over 90 percent of plantings. With its expressive, site-specific, and refreshing wines, Rías Baixas Albariño represents the pinnacle of what this increasingly popular grape can achieve.

This is largely thanks to the specific terroir of Rías Baixas, which is unreplicated elsewhere: Atlantic influences combine with granite and schist soils to create the wines’ high natural acidity, citrus flavors, and sea spray minerality. It also hinges on Rías Baixas’ long history with the Albariño grape; vintners have decades of experience honing this variety.

Driven today by a large community of small-parcel growers with a focus on quality wines and family legacies, the wines of Rías Baixas are pristine expressions of this unique Spanish terroir. With a focus on expanding sustainability practices and nearly over half of the wineries led by women winemakers, Rías Baixas is a region that is simultaneously rooted in tradition yet propelling the Spanish wine industry into the future.

Crisscrossed by rivers, the jagged coastline of Rías Baixas boasts a number of estuaries and small fjords which contribute to the cool, humid climate. The name “Rías Baixas” is an homage to these geographic features, translating literally to “low estuaries.” About 3,600 hectares are planted to vineyards situated between 100 and 300 meters in altitude.

Located in the region of Galicia in Spain’s northwest corner, Rías Baixas abuts the Atlantic Ocean and is separated from northern Portugal by the Miño River. Its cool, maritime climate is characterized by the influence of the Atlantic Ocean, which yields heavy annual rainfall and gives the verdant region its nickname “Green Spain.” Though Rías Baixas experiences an average annual rainfall of 1,600 millimeters—nearly three times the national average rainfall in Spain—this high precipitation is balanced by 2,200 hours of sunshine annually.

Winters are characterized by a combination of heavy rainfall and moderate temperatures, with an average temperature of 50°F. Spring can also be wet, presenting challenging conditions for mold, but frost is rarely an issue in the region. The summer season in Rías Baixas is significantly drier, creating ideal conditions for long, slow ripening and the production of complex wines.

As a result of the high humidity and rainfall in Rías Baixas, many vineyards are trellised using the traditional parra system, which elevates vines up to seven feet from the ground. Combined with wide vine spacing, this system encourages ventilation and prevents mold and rot from developing in the humid climate.

The primary soils of Rías Baixas are mineral-heavy deposits of granite and schist. However, the large rivers and tributaries that dissect the region have left certain areas with significant pockets of alluvial and colluvial soils. There is a low amount of organic material in the thin topsoils of the region, yet a significant amount of minerals—a combination ideal for producing sleek and characterful Albariños.

The histories of Rías Baixas and the Albariño grape variety are inextricable: Originally cultivated by Roman conquerors who brought organized viticulture, technology, and trade to the verdant slopes of ancient Galicia, Albariño has been grown on the banks of the Umia and Miño rivers for over 1,000 years. Over the course of centuries, the variety, best practices for cultivating it, and regional cuisines have developed alongside this indigenous grape, making Rías Baixas the global epicenter for Albariño today.

While local folklore suggested Albariño was brought to Spain by Cisternian monks traveling from Burgundy, new research indicates the grape is a descendant of a wild Spanish variety that was domesticated gradually and cultivated in its current form as early as Roman times. Due to its proximity to the coast, Rías Baixas was heavily influenced by Celtic traditions which can be seen in the region’s unique dialect (Gallego) and architecture.

In 1980, Spain created a denomination specifically for Albariño from Rías Baixas known as La Denominación Específica Albariño, which morphed into the Rías Baixas DO in 1988 when the region gained Denominación de Origen status. As the region expanded and modernization offered vintners more specific data about their respective terroirs, distinct subzones were identified as well. In 1988, the appellation consisted of three subzones (Val do Salnés, Condado do Tea, and O Rosal), with Soutomaior joining in 1996 and Ribeira de Ulla being added in 2000.

Since Spain began exporting these wines in the 1980s, Rías Baixas Albariño has been the country’s most successful white wine export.

While Rías Baixas produces wines in a wide range of styles including red and sparkling wines (labeled Rías Baixas Tinto and Rías Baixas Espumoso, respectively), over 99 percent of all wine produced in Rías Baixas is white.

Comprising 96 percent of all plantings, Albariño dominates the Rías Baixas region, which is home to the largest hectares of Albariño vines planted in the world. Rías Baixas has also cemented Albariño’s signature style: aromatic, with stone fruit, ripe citrus, floral, saline notes, vibrant with acidity, and light to medium in body. The wines are typically fermented and aged in stainless steel or other inert tanks in order to preserve the variety’s trademark freshness on the palate, though some producers are experimenting with barrel-aged versions.

Used in blends, Loureiro is known for its distinctive floral, herbal, and citrus aromas. It’s popular in the O Rosal subzone and in the neighboring Portuguese region of Minho.

Another popular blending variety, Treixadura is known for lending orchard fruit characteristics and floral aromas to wines. It is also popular in Minho, where it’s known as Trajadura.

Caiño Blanco, Torrontès, and Godello are permitted in Rías Baixas wines, though they are planted in small quantities.

Permitted red grapes in Rías Baixas include Caiño Tinto, Castañal, Espadeiro, Loureiro Tinto, Sousón, Mencía, Brancellao, and Dozal. Though rarely found outside the local region, these reds are known for their distinctive aromas and flavors, and they are expected to become more popular in the coming years.

The Rías Baixas DO contains five officially recognized subzones, each of which produces a unique style of Albariño as a result of climatic nuances. All five appellations are also permitted to produce red and sparkling wines, but Albariño remains the calling card for each subzone.

Val do Salnés is the original and oldest subzone of Rías Baixas, as well as the coolest and wettest area. Situated directly on the Atlantic, it is believed to be the birthplace of Albariño and boasts the highest concentration of wineries. The soils in Val do Salnés are dominated by granite with alluvial topsoils. In this chilly coastal appellation, the average daily temperature is just 55°F, resulting in long hang times and zippy, saline iterations of Albariño.

Condado do Tea is the second-largest subzone of Rías Baixas as well as the most inland. Lying further from the coast and on mountainous terroir made up of granite and slate soils, this is the warmest area of Rías Baixas. Though the average annual temperature is around 59°F, it can reach 104°F during the summer months.

The O Rosal appellation lies alongside the Miño River where it joins the Atlantic, giving it a cooler, coastal climate. Vineyards are terraced along the riverbanks and planted on granite and alluvial soils.

Ribeira do Ulla is the lone fully landlocked subzone of Rías Baixas, though it is bisected by the Ulla River. Located just southeast of Santiago de Compostela, it is dominated by alluvial soils.

Albariño is trending worldwide, recently surpassing Chardonnay and Pinot Grigio with a 17 percent increase in growth, according to IRI scan data—and because 90 percent of Albariño produced worldwide comes from Rías Baixas, the region is increasingly on consumer radars as well. Driven by continued consumer desire for exploration beyond familiar grapes and regions, as well as the trend towards drier, fresher, lower-ABV wines, Albariño from Rías Baixas is perfectly positioned for success.

A relatively small region that has only been exporting wine for about 40 years, Rías Baixas represents a real community, one that is dedicated to preserving its unique culture and family legacies of winemaking. These wines aren’t produced by huge conglomerates; they come from small growers who have a connection to this land and the Albariño grape, which is translated through the wines. Rías Baixas also celebrates its long tradition of women winemakers, with over half of the wineries currently helmed by women.