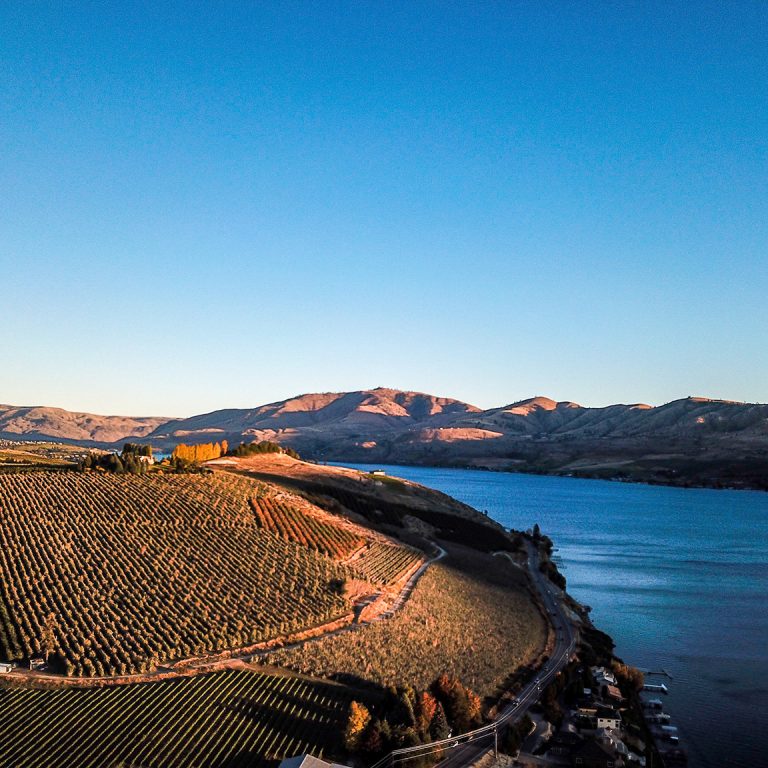 As the nation’s second largest producer of wine, Washington has long held a stellar reputation for excellence as well as value. Among critics, the state’s wineries have garnered more praise than many other leading wine regions in the world—all while maintaining an affordable average cost per bottle. Much of this success can be attributed to a long tradition of viticulture paired with a focus on forward-thinking research that has helped position Washington state at the leading edge of American wine.

This advertising content was produced in collaboration with our partner Washington State Wines.

With 1,000+ wineries specializing in everything from robust Cabernet Sauvignon to delicate Chardonnay and even late-harvest Riesling, it would seem difficult to generalize the common thread that unites Washington’s winemaking community. However, most winemakers and grape growers live and work in small towns that reflect the genuine, humble and hard-working communities of the American West. Tasting rooms are as likely to be in a converted old home as they are to be attached to a state-of-art winery, but they share one thing in common: authenticity.

Because nature has blessed Washington State with ideal viticultural conditions, winemakers here never have to force things in the vineyard. Soils are diverse from ancient glacial floodwaters, the intensive use of chemicals is often unnecessary, and the resulting wines are expressive of the terroir from which they originate. Backed by a culture of intensive research, Washington’s wineries offer wines that are as genuine as the people who make them.

From the sun-kissed vines of the Horse Heaven Hills to the maritime briskness that defines Puget Sound, Washington State’s viticultural areas are myriad and endlessly compelling.

Given the state’s position between the 45th and 49th parallel, its location close to the Pacific Ocean, its soaring Cascade Mountains, and one of North America’s most significant waterways—the Columbia River—the state’s microclimates are diverse and dynamic.

East of the Cascade Mountains in notable AVAs (American Viticultural Areas) such as the Columbia Valley, Horse Heaven Hills, Yakima Valley, Walla Walla Valley and Red Mountain, the climate is continental. Temperatures in spring typically rise gradually (between 50 and 60 degrees) to promote healthy bud breaks, while favorable rain patterns can help resources for the dry summer months. Washington’s northerly latitude provides almost a full hour more of sunlight at the height of summer than in Napa Valley. These warm days and cool nights create a diurnal temperature swing (sometimes varying 40 degrees in a 12-hour period) that is favorable for the development of balanced acidity in the grapes. In fall, just as in spring, the temperature change is gradual, which favors phenolic maturation without marked sugar accumulation in the grapes.

West of the Cascade Mountains, in the Puget Sound AVA, the climate is maritime with cooler temperatures and wetter growing conditions that favor Siegerrebe, Mueller Thurgau, Pinot Noir, Pinot Gris and other cool-climate varieties. However, this appellation is home to less than one percent of the state’s plantings.

As with winemaking globally, recent vintages have offered Washington winemakers their own set of challenges, but in each case, they’ve risen to the challenge to match the demands of increased warmth, earlier bud breaks and earlier harvests. Of particular note, are the 2014 and 2012 vintages—both lauded for their expressive character, but for different reasons, with 2012’s classic markers appealing to cooler-climate wine enthusiasts, and 2014 satisfying those with more robust tastes. Wines from 2015 reveal the character of a record-setting warm vintage, while 2016—despite its early spring and sweltering May—offers a more classical style. 2011 was uncharacteristically cool, showcasing what Washington can achieve in mild vintages—vibrant and subtle wines that show the wide range of ability from Washington winemakers. The string of vintages from 2005 to 2008 are still hailed as some of the best in recent history, and are highly sought-after by Washington wine connoisseurs.

The story of Washington wine dates back to a vineyard planted at Fort Vancouver in 1825 by the Hudson’s Bay Company. From this modest endeavor sprung forth disparate plantings across the state, particularly in the Yakima and Columbia Valleys. By the 20th century, the impact of French, German, and Italian viticulture could be seen in the grape varieties growing in the state’s burgeoning vineyards, as well as in the winemaking expertise, which reflected one of the most advanced winemaking communities in America.

The 1960s brought the advent of commercial planting—led by the seminal estates Columbia Winery (then called Associated Vintners) and Chateau Ste. Michelle (then known as Ste. Michelle Vintners)—which tapped into Washington’s extensive commitment to viticultural research, fueling explosive growth in the 1970s.

Washington has more than 60,000 acres under vine, a testament to the commercial success of the state’s Cabernet Sauvignon, Chardonnay, and Riesling, as well as bottlings of Merlot, Bordeaux blends, and Syrah. In total, 70+ grape varieties can be found in Washington’s vineyards, and the progressive spirit behind the state’s winemaking industry has resulted in ever-greater variety with each vintage.

Located in Central Washington, this appellation lies entirely within the greater Columbia Valley AVA and is known for world-class white wines, particularly Riesling.

White wines from this spectacular region (which straddles the border with Oregon) are reputed for their crisp acidity and delicate nuance, and the region also produces light-bodied Rhône wines and small quantities of Gamay and Pinot Noir.

Benefiting from one of Washington’s warmer climates, the Horse Heaven Hills are renowned for Cabernet Sauvignon and Bordeaux-style blends of uncompromising robustness.

Another sub-appellation of the Columbia Valley, Lake Chelan is defined by the moderating effects of the lake, resulting in good conditions for cooler-climate grapes such as Riesling and Syrah.

While much of this appellation resides in neighboring Idaho, its Washington portion has a “banana belt” climate that is warmer than its surroundings, supporting a number of grape varieties.

This AVA holds the distinction of having its 13,165 acres entirely farmed either biodynamically, organically, salmon-safe, or some combination of the three.

The maritime climate of Puget Sound is unique within the realm of Washington’s wine regions, fostering beautiful versions of Siegerrebe, Muller Thurgau, Pinot Gris and Pinot Noir, though a mere 100 acres are currently planted.

With plantings dating back to 1968, the Rattlesnake Hills have long provided a reliable climate for the development of high-quality Merlot, Riesling, and Cabernet Sauvignon, which are the region’s most widely planted grape varieties.

Home to some of the oldest Cabernet Sauvignon vines in the state, Snipes Mountain is known for its loess soil, which is low in organic matter and results in vines of low vigor and wines of noted concentration.

The greater Yakima Valley holds the distinction of being the first federally recognized appellation in the Pacific Northwest. Its Merlot, Chardonnay, and Syrah are often ranked among the best in the state and country.

Situated entirely on an alluvial fan, the 81,000-acre Wahluke Slope has a consistency of soil, slope, and climate that makes its ripe and full-bodied red wines a favorite of consumers.

Noted for its scenic beauty as well as complex Syrah and Cabernet Sauvignon wines, the Walla Walla Valley also has the highest concentration of wineries of any region in Washington.

Washington state’s varied climate and diversity of soils have long fostered a rich panoply of grapes. To date, some 70+ different wine grape varieties thrive in Washington state vineyards, with plantings split between 60 percent red and 40 percent white. Washington wine growers are progressive in their thinking, and consistently seek out new varieties to match with the state’s winemaking potential.

However, five principal grape varieties make up the majority of production and have helped forge Washington state’s reputation for excellence in winemaking. They continue to offer an evolving story of style and substance.

In Washington State, Cabernet Sauvignon has long found a happy home. Cold winters, gradually warming springs, longer days in summer (thank you, northerly latitude!) and mild autumns mean that this grape—the king of red varieties—can attain a complexity even in youth, that is not often found in other domestic Cabs. Washington State Cabernet Sauvignon is defined by its heady aromas and fruity character, but also minty and herbal tones that lend nuance. Reputed for its ability to mature and age with time, the state’s Cabernet Sauvignon bottlings are often seen as a benchmark in American red wine by critics and consumers alike.

Unlike the powerful, oaky tones that often define domestic versions, Chardonnay from Washington is marked by crispness, elegance, and balance. Because of Washington’s diurnal temperature swings from day to night throughout the growing season, acidity is perfectly preserved. Add to this an ethos of “less is more” in the winery (winemakers are meticulous about oak usage), and Washington Chardonnay often better suits food pairings than wines from other states.

Washington’s second most widely planted variety has long pleased the palates of consumers seeking highly aromatic, robust, and full-bodied red wines. Compared to California Merlot, Washington’s versions tend to be higher in acidity, and slightly higher in alcohol when compared to examples from Bordeaux. In recent years, Merlot’s importance has increased as red blends have taken center stage with consumers. When blended with Cabernet Sauvignon and Cabernet Franc, Washington Merlot adds volume and gravitas, as well as notes of cherries, berries, cigar box, and sweet spice.

When it comes to Washington’s international reputation for quality white wines, Riesling is the state’s pioneer. The terroir of Washington—most notably the longer daylight hours and the cool nights to lock in acidity—are ideal for producing highly aromatic, and delicately floral dry Riesling. Uncommonly for the United States, winemakers in Washington can also explore late-harvest Riesling in certain areas where the conditions for botrytis—the noble rot that concentrates sugars—are present in certain vintages.

Syrah has experienced a small renaissance with the  general public, and from Washington State vintners as well. Of Washington’s red wines, Syrah is the most varied and expressive of terroir. The spectrum of wines includes full-bodied versions where dark fruits lead the way on one end, and savory, leaner versions reminiscent of the Northern Rhône on the other. Because of this exciting variety, Syrah is among Washington’s most dynamic and sought-after grape varieties.