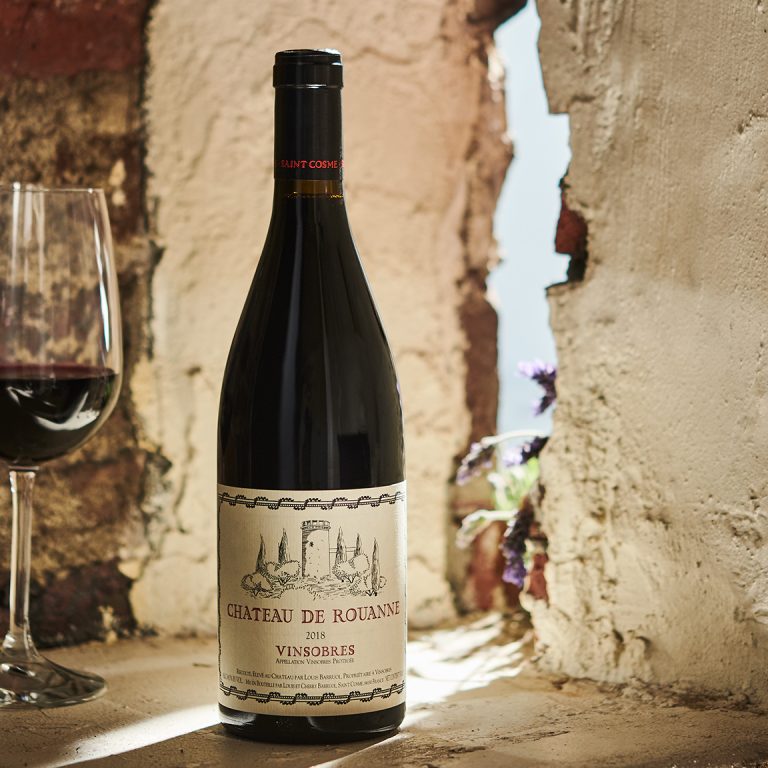 
The sister estate of Gigondas’ legendary Château de Saint Cosme, Château de Rouanne is a hidden jewel of the southern Rhône’s cool Vinsobres cru. With the 2019 vintage from Rouanne—its first harvest under Louis Barruol’s deft hand—arriving in the U.S. soon, this special estate is set to define the greatness of Vinsobres wines.

Louis Barruol has become one of the southern Rhône’s most masterful winemakers, known for revolutionizing his family’s Château de Saint Cosme and transforming perceptions of Gigondas. Two years ago, Barruol brought his winemaking prowess to another southern Rhône jewel: Château de Rouanne, a historic property in the special Vinsobres cru. After much anticipation, the first vintage of Château de Rouanne with Barruol at the helm arrives in the U.S. in October—and it’s sure to be a new benchmark for the region.

Just as he did with Gigondas nearly 30 years ago, Barruol now has the opportunity to elevate the Vinsobres appellation’s clout in the wine world; it was only elevated to cru status in 2006. “It reminds me a lot of Saint Cosme when I took it over in 1992,” says Barruol. “It’s an unknown sleeping beauty waiting for a vigneron to truly love it.”

Vinsobres’ unique position within the southern Rhône also yields a uniquely cool microclimate in the warm region; it is the northernmost of the southern Rhône’s crus and is cooled by the Mistral and Pontias winds. For this reason, Vinsobres is known for its bold, refined Syrah—a key component of Rouanne’s blends.

Château de Rouanne bears a striking similarity to its sister estate; the historic, 177-acre property sits on a classified Roman site and is home to a freshwater spring. But it has its distinctions as well: The Rouanne vineyard is a single hillside block somewhat reminiscent of Burgundy, which has permitted Barruol to identify and highlight several unique lieux-dits. The vineyard was planted in the 1960s to Syrah, Grenache, and Mourvèdre in soils of limestone and sandy marl; Barruol has since converted the estate to organic farming.

Fans of Saint Cosme’s expressive, terroir-driven, fresh wine style will be similarly drawn to the 2019 vintage wines from Rouanne; Barruol has brought techniques to the winery like whole-bunch fermentation, concrete vats, fermentation using indigenous yeasts, and foregoing fining and filtration at bottling.

2019 is a great vintage to become acquainted with Rouanne as well: Not only did Barruol acquire the property in that year, but it’s also a vintage that the winemaker puts on par with the great years of 2016, 2010, 1998, and 1990. The Château de Rouanne Vinsobres Classique 2019 (which is the second release under new ownership but the first that Barruol harvested and vinified after purchasing the vineyard) offers a lovely expression of the cru as a whole, with notes of raspberry, violet, and black pepper; it is 50 percent Grenache, 40 percent Syrah, and 10 percent Mourvèdre.

“Rouanne is a jewel property that comes at an important stage in my vigneron life,” says Barruol. “I just regret that my father is not alive to share this wonderful news with me, and to see Saint Cosme and Rouanne become sister estates.”