This advertising content was produced in collaboration with our partner, Rhône Valley Wines.

Côtes du Rhône is one of the most famous appellations in the world for reliably delicious, value-driven red wines. But this gorgeous part of southeastern France is about so much more than that: From stellar Côtes du Rhône Villages reds to whites and rosés crafted in a wide range of styles, this is a part of France that, despite familiarity among professionals and consumers alike, is full of surprises.

Perhaps more than any other part of the country’s wine map, Côtes du Rhône is awash in generously fruited, often spicy red wines that appeal to a wide range of tastes and are well-known for their food-friendliness, offering tremendous value on wine lists and retail shelves. Yet that sense of familiarity shouldn’t be taken to mean that that’s all Côtes du Rhône brings to the table: It’s spread out over a mind-boggling array of terroirs and micro-climates, and the result is an AOC that is impossible to pin down, despite frequent efforts to do so.

SevenFifty Daily recently brought together a group of some of the top wine professionals in the industry to explore what makes Côtes du Rhône so important. The main takeaway? This is a region full of surprises; it challenges preconceived expectations in the most delicious and often unexpected ways, and it is nothing less than a secret weapon among buyers, sommeliers, and retailers.

Wine production in Côtes du Rhône is nothing new. The historical record traces grape growing and winemaking back to 125 BC, when the Romans planted vines along the Rhône River. The waterway itself provided a useful connection between the Mediterranean basin and the more northerly areas of France and the greater body of Europe beyond it. Throughout history, its location and the incredible benefits of its climate and soils have made it a key part of the French wine world. Indeed, it was in 1937 that Côtes du Rhône was granted AOC status, among the first wave of appellations to receive it.

Yet even though this is an ancient winegrowing area, with a deep respect for its storied past, Côtes du Rhône has its collective eyes set firmly on the future. The AOC wants to lead the way in terms of environmentally responsible farming and production, and its location and constituent grape varieties have positioned it well for continued success. Côtes du Rhône, in other words, has a lot going for it.

A Diversity of Terroirs

The Rhône Valley encompasses a significant amount of land. It stretches approximately 250 kilometers north to south, including 418 communes, and more than a dozen different types of soil and underlying geology.

“It does have a lot of diversity in it,” noted Robert Cavanaugh, the CEO of Adventure Wine. He added: “All of those different climatic variations, all coupled with the different terrain, mountains and rivers—you’ve got the big Rhône River cutting through [as well as all its tributaries]—it just lends itself so well to diversity.” 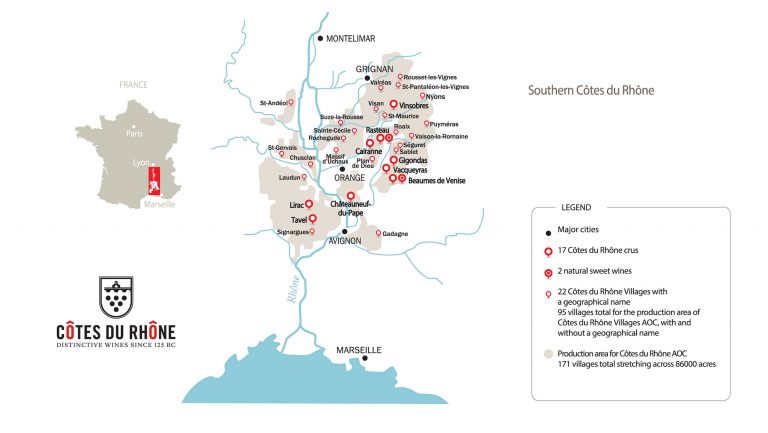 The Rhône Valley’s oldest terroirs trace their roots back a quarter of a billion years, when metamorphic and igneous rock were formed, which still impact the wines of appellations like Saint-Joseph and Côte-Rôtie today. The very oldest terroirs go back to the Triassic and the wines are still colored by them.

Unlike many other appellations within the larger Rhône Valley, the Côtes du Rhône encompasses a large and not-entirely-contiguous area that runs from Vienne, up north, all the way south to Avignon. The vast majority of the grapes for Côtes du Rhône wines are grown closer to the south, but there are pockets up north as well. In total, more than 96,000 acres are in the Côtes du Rhône appellation, which explains how over 1,200 wineries dot the landscape.

Few other appellations in France are as well-known for blending as Côtes du Rhône. In all, 23 different varieties are permitted there, though the reality is that a handful play more significant roles than the others. That being said, the sheer diversity of varieties that are planted throughout the Côtes du Rhône appellation means that producers have a large palette to work with in a world increasingly affected by climate change. Sommeliers and buyers, as a result, have a huge range of wines to take advantage of.

“I’ve had an AOC Côtes du Rhône as a glass pour since the day the restaurant opened,” said Kat Hawkins, the wine director of RPM Steak in Chicago. “There’s tremendous value, and there is tremendous quality and versatility in those wines.”

She added: “To speak to different bottlings, you have the depth and range of picking where you’re at in the valley. Further north, you have something with a little more Syrah to it generally, a little bit more plush and fruit-forward, and you can talk about those nuances. When you head back towards the south, you get into heavier Grenache territory, generally speaking. And those wines tend to be a little bit more brambly, more earthy, and you can lean into that … So you have huge amounts of versatility.”

Among reds, the primary grape varieties include: Syrah, for brambly fruit, bacon- or game-like savoriness, and spice in the cracked peppercorn vein; Grenache, for effusive cherry fruit and dried scrubby Mediterranean herbs, often called garrigue; Mourvèdre, for darker fruit—blackberries and plums are commonly found—a meaty sense of savoriness, and often a subtle floral lift; Carignan, for woodsy spices and red berry notes, as well as more savory flavors and aromas; and Cinsault, for nicely defined fruit, an often floral lift, and an ability to thrive even in notably hot years.

Among whites, the key varieties include: Viognier, for stone fruit, honey, and a distinct floral perfume; Grenache Blanc, for white licorice, pears, and hard stone fruit; Marsanne, for its often waxy and plush texture and hints of citrus and spice; and Roussanne, for its fresh herbs and pears, as well as its greater lift than Marsanne.

There are many other varieties as well, but these are the ones that tend to dominate, and that often define the majority of the wines that find their way to retail shelves and restaurant wine lists.

A Wealth of Individual Villages

Côtes du Rhône as an appellation is highly regarded for its generous, pleasantly spicy reds and excellent value whites and rosés. But within the larger appellation there are a number of subdivisions that are important for more fully understanding what makes it so special.

Wines labeled as Côtes du Rhône Villages can be crafted from fruit grown in specifically identified villages, and the rules for the cultivation of those grapes is stricter than it is for wines labeled Côtes du Rhône. 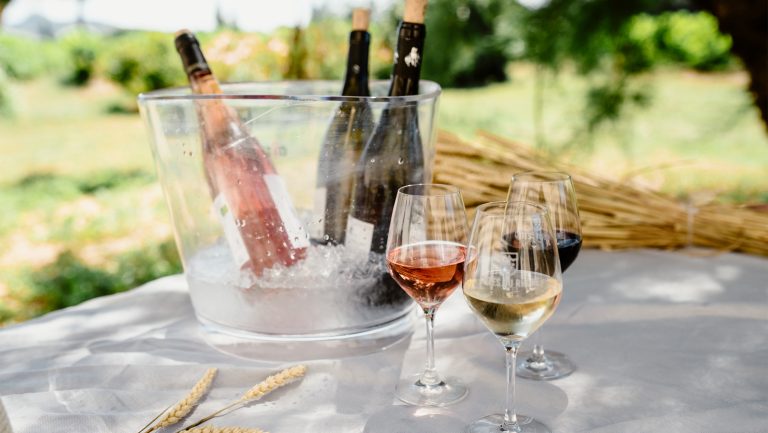 “Côtes du Rhône Villages has a little bit more focus,” explained Anna Viducic, the founder and CEO of Aroma Wine Co. “The wines are a little bit more complex … The Côtes du Rhône Villages with a [geographic or village] name attached to it are harder to find in the U.S..” But it’s worth the effort. “They’re texturally different,” she added, and their constituent grape varieties and the specific character of how they manifest themselves in each village are worth exploring.

There are 22 villages whose names can appear on labels after the Côtes du Rhône Villages moniker. These represent some of the most expressive and terroir-specific wines in the entire Côtes du Rhône appellation. Buyers and consumers increasingly understand the importance of these wines, and villages like Sablet and geographic names like Signargues demonstrate the sheer diversity of wine styles that are being produced in them.

On top of that diversity, many of the top growers and producers have become leaders in the movement toward more environmentally friendly farming and production. The natural sunshine and heat of the Côtes du Rhône affords them the opportunity to minimize chemical inputs in the vineyard and more fully express the natural character of the terroir in the winery without the aid of synthetic products. Côtes du Rhône wants to become a leader in the move toward a more sustainable wine industry overall, which will in turn make the wines even more appealing to buyers and consumers alike. Combine that with their inherent value and food-friendliness, and you have the recipe for a region that’s very much on the up-swing.

With a collective focus on agroforestry practices, the lauded region’s producers are using trees and shrubs to restore natural health to their estates

From achieving the highest level of organic certification to creating winemaker collectives committed to action, these Médoc producers are part of a hub of environmental innovation

With a winemaking history that stretches back centuries, and a diversity of terroirs that’s among the most impressive in France, it’s time to explore the hidden gems of Alsace