This is the third article in our three-part series on Best Practices of Highly Effective Sales Reps. Be sure to also read How to Develop and Communicate Product and Portfolio Knowledge and How Top Sales Reps Stay Organized and Productive.

If you Google the phrase “sales motivation,” the search engine will deliver nearly 500 million results, ranging from inspiring pep talks to roadmaps filled with “hacks” and the obligatory clip from The Wolf of Wall Street. What is completely missing in those search results is the most essential aspect of staying motivated, particularly in the beverage alcohol business—passion.

“Obviously, I am financially motivated,” says Robin Touchet, a sales representative with Polaner Selections, who started in the wine industry in 1995. “But I couldn’t be selling shoes or pharmaceuticals—or even half of the wine books in New York City. For me, it’s about the people I represent. That’s what drives me.”

Passion may be a prerequisite for success, but sales reps in the beverage alcohol business report that setting attainable and challenging goals, analyzing their sales for new opportunities, and keeping challenges in perspective can also be powerful assets in maintaining their ambition.

In the beverage alcohol business, it’s common practice for distributors and importers to set sales targets for each salesperson, depending on the expectations of each person’s territory. How the salesperson prioritizes these goals and reaches them can be highly customized.

Emily Holyoak is a sales representative for Breakthru Beverage Group in South Carolina. Her sales goals are established for her annually, but her territory—which includes the lucrative resort community of Hilton Head Island—is highly seasonal. She has to balance the demands of her territory with sales and product goals set by Breakthru. Keeping this information organized and in perspective is key to staying motivated—and not getting overwhelmed.

Holyoak uses SevenFifty to create customized product lists that allow her to focus her efforts for a two-month period. She sorts products into various target lists (such as California Pinot Noir or budget half bottles) that can be shared with her manager, teammates, and customers. The process gives her a way to parse Breakthru’s enormous portfolio and helps her reach her sales goals by selling the right products at the right time. “I will have about 100 lists going at any given time,” she says. “It’s so helpful.”

Like many distributors, Breakthru also regularly provides employees with the incentive of trips, which Holyoak finds to be a huge motivator. She has traveled to Napa and Sonoma Counties on incentive trips and says that “earning my way onto those trips was extremely rewarding.”

For Touchet of Polaner Selections, maintaining a positive growth percentage on her accounts has been crucial to her outlook on sales, but she’s had to modify her expectations over the years. “At the start of my time with Polaner, the growth numbers were naturally a lot higher—sometimes 50 or 60 percent,” she says. “Then, as the accounts matured, the percentages were smaller because I’d taken those accounts as far as I could. So now I’m adding smaller percentages every year, and it’s about just maintaining growth.”

Because Polaner allows Touchet to customize her sales goals, she views them in a more holistic, long-term way than when she started with the company. “I used to drill down into the numbers a lot more on an account-by-account basis,” she says. “But now I take a more Zen approach.” For her, the best tactic to reach her sales goals is to find categories that have been underrepresented that can be “value added” sales, such as sake.

“Last year,” Touchet says, “I made a conscious decision to sell more sake. I didn’t set a numerical standard but just made it a priority.” She adds that in many cases, sake sales were over and above other products sold. “Those placements are easier to maintain because people reorder,” she says, “so finding a category like that has been a big motivating project for me this year.”

While sales targets often seem like a black-and-white objective (that is, either you hit it or you don’t), seasoned sales representatives know that analyzing their performance against established goals often requires a more granular inspection.

Most distributors equip reps with detailed sales history data in the form of monthly spreadsheets, built-in ERP functionality, or SevenFifty’s Sales History Report. Reps should be able to easily see year-to-date sales, progress toward weekly and monthly goals, and sales broken down by account, supplier, and producer. 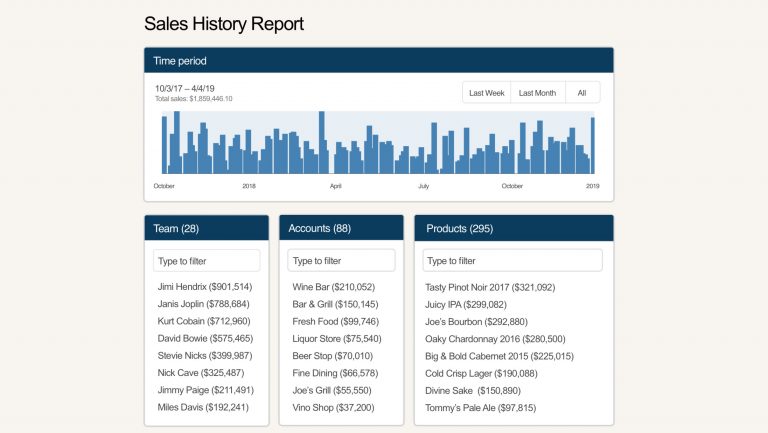 Richard Pogue, a sales rep with Winebow who has more than 20 years of beverage distribution experience, regularly analyzes sales performance on a by-account basis. “The most important measure is this month versus the same time last year,” he says. “How many active items do you have with each account? And are you going in the right direction?”

Pogue stresses that the story represented by the sales numbers often has a lot of gray area that requires deeper analysis. “Sometimes customers are just not going through the wine I sold them fast enough, and I have to figure out why,” he says, adding that this becomes an opportunity to talk with the client about collaborating on solutions. These can include staff trainings or incentives where permitted, and the introduction of new products, in-store tastings, and shelf talkers for stores that allow them.

Breakthru’s Holyoak also analyzes by-account metrics, but she does so with a caveat. “Sometimes they’ll [reveal that] you are down in case numbers,” she observes. “But on the flip side, I might be up in dollars because I’m selling a higher-dollar SKU. It all depends.”

For Touchet, analyzing sales performance boils down to the overall health of each account. “When something is off with an account, that’s when I do a deep dive on the numbers,” she says. Challenges often arise from the high turnover rate—both for employees and restaurants—in New York City. Because the tenure of a buyer is often less than a year in Touchet’s territory, she relies on two years’ worth of sales data to develop a true understanding of her performance in that type of account.

Staying Engaged with Buyers and Producers

Winebow’s Pogue notes that the frustrations and challenges of his job are often overcome by strong relationships, both with buyers and producers. “I’m really fascinated by this business,” he says, “and being immersed in it. I just go back to my customers because I get jazzed when they get excited about things.”

Pogue points out that his best relationships with customers are also the most educational, as they are often the first to see trends emerge in the drinks business. “They know what people are interested in,” he says, “and I get motivated by seeing these things happening in the market.”

Touchet notes that she is lucky to work for a company that chooses not only great wines to import but the great people who produce them. Because of this, she feels an emotional connection to the producers’ work, as well as a personal responsibility to them when she is out selling.

“Some of our producers have been pummeled year in and year out by the weather, and you know that this is how they put dinner on the table. And sometimes some of them don’t make it. I want people to support them in their project. For me, it’s 100 percent about these personal relationships.”

Pogue agrees with Touchet that producer relationships fuel his motivation, but he also adds that they often translate to better sales. “I had a producer in town recently, and now I know the wines cold. I like him a lot, too, so if I’m meeting someone new—if I want to show them that I know my stuff—I pull out his wines to impress.”

Adversity, whether it’s dealing with buyer attrition or struggling with an unreasonable client, can put a dent in any salesperson’s motivation.

“We have had three hurricanes in the past three years,” says Emily Holyoak of Breakthru Beverage Group. “Trucks weren’t making deliveries to Hilton Head because there’s only one bridge on and off the island.”

Catastrophic weather aside, plenty of other elements are beyond a sales rep’s control, including economic downturns, spoiled products, and case breakages. Even repeatedly hearing no from a customer can lead to discouragement. But Holyoak counters that if sales were easy, everyone would do it. “The old adage that it takes a lot of nos to get a yes is 100 percent true.”

She overcomes this by treating rejection from a customer as a learning opportunity. “When I get a no, she says, “I ask more questions, like ‘What did you not like about this product?’ or, put another way, ‘What about this product didn’t work for you?’ Asking questions lets the buyer know you are genuinely interested in bringing them something that will be the right fit.”

Touchet agrees, and she refers to this practice as checking her communication, noting that overcoming sales adversity often comes down to working with the customer to identify where the products are missing the mark. But she adds that being overly insistent with a customer is never the best method. “If somebody doesn’t want to work with you, that’s sometimes just their prerogative. I feel like I have a great book, and my job is to shine a light on that and hopefully find some commonality with the customer.”

SevenFifty is an online marketplace and communications platform that helps importers, producers, distributors, and retail buyers connect with each other and do business in a modern world.

We just made it easier to export your portfolio, make edits, and update your products and pricing on SevenFifty

Improved, standardized product data is the one resource every distributor needs to scale up and operate efficiently