Anyone who doubts the reality of climate change should talk to a few grape growers in Champagne. They don’t just have a notion that a shift is taking place—they have the data to prove it.

“The facts are very drastic,” says Thibaut Le Mailloux, the director of communications for the Champagne trade association Comité Interprofessionnel du Vin de Champagne (CIVC) in Épernay, which employs dozens of researchers and farms a 13-hectare experimental vineyard in the region. “The potential alcohol level in the grape juice has increased by an average of 0.7 percent by volume over the last 30 years, acidity has dropped by 1.3 grams H2SO4 (sulfuric acid) per liter, and harvest has begun an average of 18 days earlier.” Similarly, the region’s average temperature has risen by 1.1 degrees Celsius over the same time period, proving that Champagne’s normally chilly climate is indeed getting warmer.

Along with bringing new vine diseases, harmful insects, and violent storms that can wreak havoc on early-flowering vines and fragile clusters, says Le Mailloux, warmer temperatures threaten to diminish the acidity that has been a signature of Champagne for centuries. To help preserve that freshness, growers and producers are changing their tactics in the vineyard and cellar. They’re even rethinking the grapes themselves.

Preparing for Changes Ahead

In 2016 the CIVC announced its Varietal Innovation program, an ambitious effort to create new grape varieties that can adapt to Champagne’s evolving climate. CIVC researchers are crossing Pinot Noir, Pinot Meunier, and Chardonnay with varieties developed by the French National Institute for Agricultural Research (INRA) in order to create new hybrids with better acid retention and resistance to heat and mildew. This research is in the early stages of development, however, and the hybrids won’t be ready for another 25 years. “We’re developing grapes for our kids to make Champagne with,” says Le Mailloux. “But we have to do it because of the radical changes in climate.”

The CIVC is also spearheading efforts to significantly reduce the region’s overall carbon footprint. “We have tackled transportation, packaging, recycling, and glass production,” says Le Mailloux, noting that the efforts have led to a 20 percent drop in the region’s carbon footprint since 2003. “Our goal is to reduce [that footprint] by another 50 percent by 2050.”

To adapt right now, growers and producers are adopting shorter-term strategies to preserve Champagne’s famous freshness. Christian Holthausen, the head of export sales and international communication for Champagne AR Lenoble in Damery, is one of the region’s most vocal supporters of immediate action. “We are speaking openly about climate change as often as possible, since this is a global problem,” he says. “The more attention we draw to the issue, the better it will be for all of us.”

Since 2012, all 18 hectares of AR Lenoble’s vineyards—primarily located in the Côte des Blancs—have earned France’s Haute Valeur Environnementale, its strictest environmental designation, which requires that farms employ strategies like biodiversity conservation and water management. The producer is also actively working to protect its signature style of freshness and balance.

Adapting in the Cellar

The region’s biggest challenge, Holthausen says, is maintaining brightness in the wines. “For a while, the rise in temperatures was a benefit to Champagne,” he says. “We used to worry about achieving maturity and proper degrees of alcohol, but that is no longer the case. Every year we notice a marked decrease in acidity and a marked increase in pH. This was the main reason we started aging our reserve wines in magnums starting in 2010.”

Like many producers in Champagne, AR Lenoble sets aside reserve wines as a kind of insurance policy against crop damage or to use in blending with the current vintage’s wine to achieve a particular style. When stored in larger bottles such as magnums, the wines age more slowly and retain their freshness longer.

“Twenty years ago, we needed reserve wines to add richness and complexity to our wines,” says Holthausen, “but now we need them to add richness, complexity, and most importantly, freshness. The future is about freshness, but also about balance.”

For the last three years, AR Lenoble has used sulfur dioxide to block malolactic fermentation, the process that converts tart malic acid into softer lactic acid. In a remarkable instance of foresight, the house created its first zero-dosage Champagne back in 1998. In today’s warmer climate, the additional sugar of dosage has become less desirable for many producers.

Holthausen can’t say for sure which techniques other Champagne houses are using in the cellar, but there are always rumors. “Wagging tongues in the region talk about some producers [who are] practicing acidification in an effort to preserve freshness,” he says. “You cannot spend years and years convincing people of the diverse terroirs of the Champagne region and then practice acidification.”

At Champagne Vazart-Coquart & Fils in the town of Chouilly in the Côte des Blancs, the third-generation grower Jean-Pierre Vazart is also taking steps to deal with climate change. “We have always had weather damages, but now we have more violent storms,” says Vazart, a pioneer of sustainable development in the region. “In a few minutes, we can lose everything. And of course, we can perceive that the wine is changing—with more sugar and less acidity.” 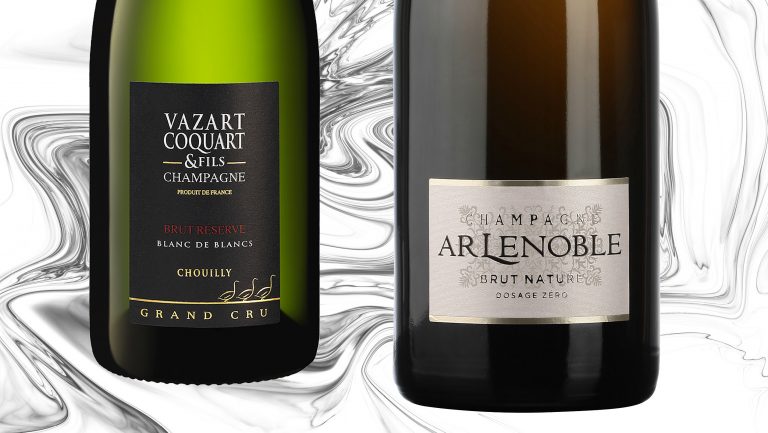 Vazart no longer uses herbicides in his vineyards, and he plants cover crops between the rows, which helps maintain acidity in the grapes and improves the health of the soil. In his new winery, which was built in 2016, Vazart has the ability to stop malolactic fermentation, and he has increasingly taken advantage of that option. “When all of the first fermentations are finished,” he says, “we taste every vat, and then we can decide for each if the wine is already balanced. In 2016 we did malolactic fermentation on two-thirds of the wines. In 2017 we did one-third, and in 2018 we did none at all.”

For Vazart, freshness is only part of Champagne’s identity. “We search first and foremost for balance,” he says. “Showing the terroir and our know-how is essential.”

Not all of the region’s producers are ringing alarm bells, however.

Champagne Drappier, located in the town of Urville in the Aube, became the first carbon-zero Champagne house, in 2016. Besides 17 hectares of certified organic vineyards in the Côte des Bar, the winery has a solar roof and wind turbines to generate energy. Despite those measures, the proprietor, Michel Drappier, isn’t particularly worried about climate change.

“So far—and only so far—global warming has been positive for us,” he says. “We’ve lost some crops due to extreme hailstorms and frost, but the quality of our grapes and our average yields have increased in the past 20 years.”

The loss of acidity, says Drappier, isn’t a major concern at this stage. “We harvest earlier,” he says, “and vines on the slopes facing east—and sometimes north—can be excellent. The best Champagnes of the past century have always been produced in riper years.”

But even so, Drappier says, “some nonmalo wines might be used in the future.”

While no one knows exactly how climate change will affect Champagne in the long run, Holthausen says, the key is to keep talking—and adapting. “The most important thing,” he says, “is for all agricultural producers around the world to work together to farm better, to be more conscientious, to collaborate and share best practices. We are truly all in this together.”

Tina Caputo is a writer based in Northern California who covers wine, beer, food, and travel. She was formerly the editor in chief of Vineyard & Winery Management magazine, and her work has appeared in Wine Enthusiast, Visit California, Sonoma magazine, the San Francisco Chronicle, and many other publications. She also produces the podcast Winemakers Drinking Beer.

Regulatory and climatic changes are putting vintage at the forefront of Cava production, giving the Spanish sparkling wine a whole new level of complexity

Unknown to most, Romania is one of the world’s largest winemaking countries. Now, it’s upping its premium wine game—and its reputation