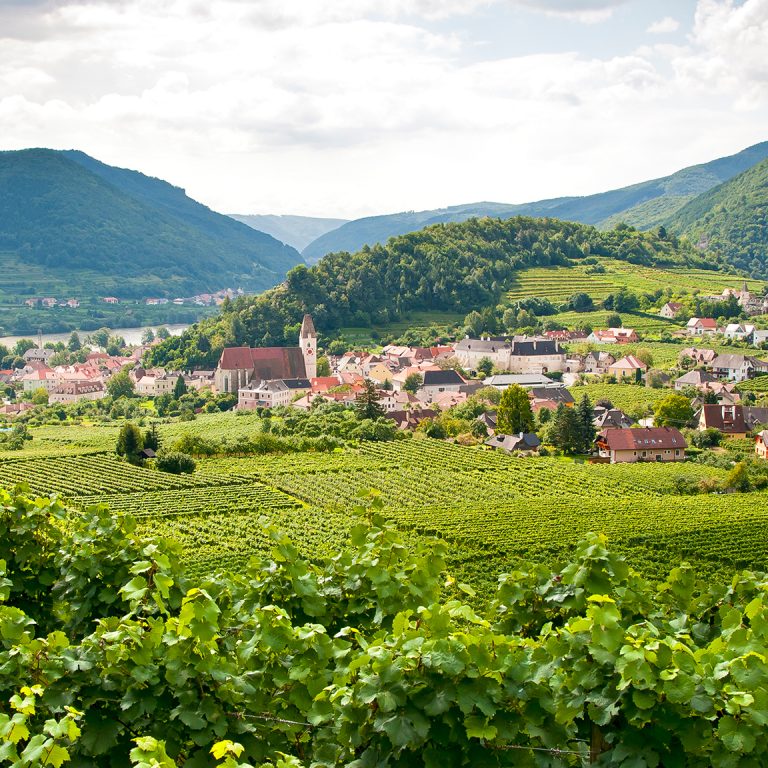 Over the last few decades, Austria has emerged as a major player on the international wine scene. Today, its reputation is soaring and the region’s wines are routinely featured on the most renowned wine lists worldwide. Best known for its crisp and refreshing single varietal white wines made from Grüner Veltliner and Riesling, Austria also makes elegant, earthy reds from Pinot Noir and from local varieties like Zweigelt and Blaufränkisch—in a range of styles. Most of the country’s world-class wines are produced along the eastern border where the terroir is ideal for cultivating an array of indigenous and international varieties.

Austria’s mountainous countryside gives way to the expansive Pannonian Plain, where most of the country’s wine is made. The majority of Austria’s vineyards span the eastern edge of the country, along the Czech, Slovakian, Hungarian, and Slovenian borders. The wine regions are all relatively close to the capital city of Vienna. Compared with other internationally renowned wine countries, the viticultural area in Austria is fairly small, but its size doesn’t hold the country back from turning out exceptionally high-quality wines across the board.

After struggling with a number of setbacks throughout its winemaking history, including a major scandal involving dessert wines from Burgenland in the mid-1980s, Austria has spent the past several decades tightening up its wine laws, implementing strict quality standards, and working to restore its winemaking integrity. These efforts have yielded positive results. Austria is once again recognized as a leading producer of elegant wines made from international varieties—such as Riesling and Pinot Noir—and local grapes like Grüner Veltliner, Zweigelt, and Blaufränkisch, with a spectrum of offerings ranging from bone-dry wines to lusciously sweet ones.

Austria’s wine laws were originally based on the German system and featured two overarching categories: Qualitätswein (made up mostly of dry wines) and Prädikatswein (comprising mostly sweet wines)—with an additional Prädikat category, Ausbruch, that primarily pertains to sweet dessert wines made from botrytized grapes, most commonly in the area of Rust in Neusiedlersee.

However, recently Austria has been transitioning to an appellation system that’s more like France’s AOC system. Rather than focusing on the ripeness levels of the grapes at harvest, the Districtus Austriae Controllatus (DAC) appellation system focuses on terroir, permitting only select varieties, limiting alcohol levels, and defining specific guidelines for the individual styles of each region.

Approximately two-thirds of Austria’s vineyards are planted with white grapes. The majority of them are devoted to the country’s prized Grüner Veltliner variety, but recently plantings of red grape varieties have been on the rise.

The majority of Austria’s wine regions are located east of the Alps, along the borders of the Czech Republic, Slovakia, Hungary, and Slovenia. There are 46,000 hectares under vine, and in 2016, they produced a yield of 42 hectoliters per hectare.

Austria has a Central European continental climate that’s influenced by the country’s proximity to the Alps. Typically, winters are short and cold, springs are temperate and can be rainy at times, summers are long and hot, and autumns are long, with warm days and cool nights. When there is sufficient humidity during the ripening season, the noble rot (botrytis) necessary for making many of Austria’s specialty dessert wines is produced. There are several climatic subzones within Austria, including the Danube area, with its diurnal shifts; Weinviertel, with its dry microclimate; the Pannonian area, with its warmth and humidity; Steiermark, with its cooler alpine climate; and the Bergland with its Atlantic climate.

From the time that Vitis vinifera grapes were introduced by the Celts—and likely their Illyrian predecessors—around 700 BC up to the present, Austrian viticulture has endured fluctuating fortunes. Early cultivation of vineyards was taken up by the Romans around 1 BC. However, viticultural expansion was then prohibited during the rule of Emperor Domitian. Two centuries later, Emperor Probus did away with Domitian’s prohibition, encouraging the development of new vineyards north of the Alps between AD 276 and 282. By AD 488 the Romans abdicated control of the province of Noricum, and mass migrations led to the abandonment of many vineyards.

By 795, Charlemagne had come to rule the area, and viticulture flourished once again. During Carolingian colonization, regions east of France saw greater vineyard expansion and more attention was given to the cultivation of high-quality grape varieties. Austrian viticulture suffered another blow with the Magyar invasion, which caused major setbacks for winemakers during the period from 890 to 955.

The 10th century marked the beginning of a long period of vigorous viticultural growth. From the 10th through the 12th century, the introduction by the Cistercians of more sophisticated viticulture methods from Burgundy was a key development. Monasteries expanded the area under vine and dominated winemaking. In 1170 the citizens of Vienna were given the opportunity to purchase vineyards, which led to the development of many vineyards within the city limits. Between the 15th and 16th centuries, the number of Austria’s vineyards peaked, and the total area under vine was as much as three times the total acreage that exists today. Austrian winemaking was further revitalized in the 18th century under the rule of Maria Theresa, followed by her son Joseph II. It was during Joseph’s reign that Buschenschank legislation was enacted, allowing vintners to sell their wine on their own premises, and leading the way for the Heurigen and Buschenschank wine taverns, classic venues that are still popular in Austria today.

Phylloxera destroyed a large number of the country’s vineyards around 1872, curtailing the burgeoning international success of Austria’s wine at the time. In 1907, the first Austrian law regarding the production of wine was introduced. In addition to specifying requirements for producing wines, the law also prohibited the fabrication of artificial wines. In the 20th century, the devastation of the two world wars wreaked havoc on the country’s wine regions, resulting in a protracted effort at revival over the four decades after World War II. During this time, Grüner Veltliner emerged as the country’s national grape. Austria’s sweet wines also began to experience international renown in the late 20th century. In the late 1980s, Austria began implementing strict quality control standards that paved the way for the international prestige that Austrian wines enjoy today.

The DAC system, introduced in 2002, focuses on the regional typicity of the grapes used to produce the wine. Nine of Austria’s 16 wine-growing regions have legally been granted DAC status by the Ministry of Agriculture. Each one abides by a specific set of regulations and grape classifications to meet the designation’s standards of regional typicity and quality control; all other wines are labeled under the name of the federal state they’re grown in. The nine DACs are:

All DAC wines fall into the Qualitätswein category. Within the DAC system, the two most significant tiers of quality are Klassik and Reserve. Klassik typically identifies unchaptalized, medium-bodied dry wines with a minimum 12% ABV, and Reserve denotes richer, full-bodied wines with higher must rates, a minimum 13% ABV, and in some cases, discernible residual sugar.

Austria is known for its dry white and red wines, as well as its sweet dessert wines, the best of which are made with botrytized grapes. The country produces approximately 2.5 million hectoliters of wine annually.

Austria’s most widely planted grape accounts for nearly one-third of all the country’s vineyard plantings, which equates to approximately 13,518 hectares. Plantings are particularly concentrated in the areas of Niederösterreich and northern Burgenland. Grüner Veltliner is the offspring of Traminer and St. Georgen. It’s a variety that tends to ripen midseason, and it thrives in deep loess soils, but it also requires yield regulation. Grüner Veltliner gives versatile wines with distinctive minerality and green vegetable, stone fruit, herbaceous, and peppery notes; it can also develop honeyed, toasty notes with age. Styles range from light-bodied, low-alcohol dry wines (including young heurigen wines and base wines for Sekts—Austria’s sparklers) to fuller-bodied, higher-alcohol dry and viscous sweet wines.

While Riesling accounts for less than 5 percent of Austria’s vineyard plantings (1,863 hectares), it is the country’s second most important variety—and the most significant white variety in the Wachau. This late-ripening grape originated in the Rhine and was later brought to the Danube. It’s descended from Weißem Heunisch, Vitis Sylvestris, and Traminer. It grows well in rich, rocky soils along the Danube River and its tributaries. Austrian Rieslings are full-bodied and almost always dry, with characteristic acidity and ripe peach, apricot, and tropical fruit notes. Those from the Wachau, Kremstal, Kamptal, and Traisental regions offer slate and flinty mineral notes. As they age, Austrian Rieslings develop greater complexity and can take on distinctive rose and petrol notes. Late-harvest botrytized grapes yield outstanding Auslesen and Beerenauslesen wine styles.

Originally called Rotburger, Austria’s most widely planted red grape is a crossing of Blaufränkisch and St. Laurent. The hybrid was created in 1922 and designed for higher yields and early ripening. (The original name presented some challenges in English-speaking markets, so the grape was later renamed after its creator, Fritz Zweigelt.) It accounts for 6,476 hectares (approximately 14 percent) of Austria’s vineyards. It’s a midripening variety that calls for intensive leaf pruning and yield regulation. Zweigelt yields a range of styles, from fruity, unoaked wines that are meant to be drunk young to mature, full-bodied wines that are aged in barrique; often Zweigelt is used as a component in cuvée wines. Zweigelt is typically violet-red in color with soft tannins and characteristic cherry and black pepper notes.

Considered Austria’s signature red grape, Blaufränkisch is the country’s second most widely planted red variety and can be found in the highest concentrations in Burgenland and in eastern Niederösterreich. There are approximately 3,225 hectares of Blaufränkisch (7 percent) in Austria’s vineyards. The grape is a cross between Blauer Zimmettraube and Weißer Heunisch and was first documented in Austria in the 18th century. It’s a late-ripening variety that produces wines with moderate tannins, high acidity, and notable minerality. Red berries and cherry are the dominant flavor notes, but the wines are also known for their spicy character.

Austria’s international reputation for winemaking is booming. The country’s wines are sought after for inclusion on prestigious wine lists worldwide. Despite its big reputation, Austria’s winemaking community is rather small—and mostly made up of small producers. There are approximately 20,000 winegrowers in the country, including 6,000 who are considered bottlers.

Austria is now seeing a new generation of young, highly educated oenologists taking over their family estates. As a result, it’s becoming common for older winemakers to step back from the management of vineyards and cellars and to take on ambassadorial roles.

Grüner Veltliner maintains the lead as Austria’s number one variety by a long shot. It can be enjoyed in a wide range of styles, but the spritzy version bottled with a small amount of residual carbon dioxide is currently trending as a fresh, zippy wine ideal for pairing with summer fare.

Red grape plantings are also steadily increasing throughout the country, and indigenous red varieties like Blaufränkisch, Zweigelt, and St. Laurent are coming into fashion—as are natural wines created from biodynamic practices.