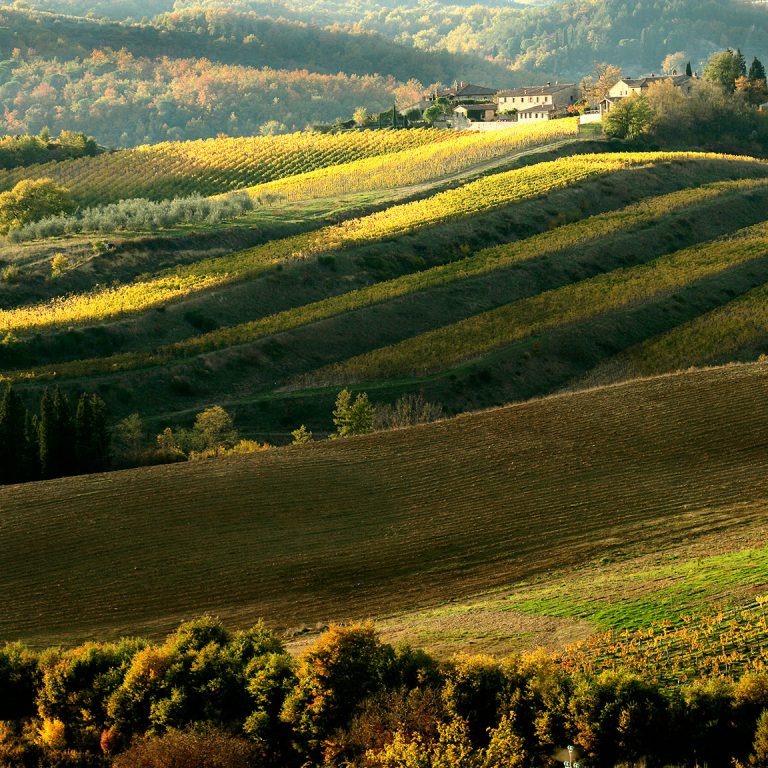 The Tuscan countryside that makes up Chianti Classico has been inspiring poets, sculptors, and philosophers since the Middle Ages, and its wines transmit the intrigue of that landscape with gorgeous clarity today. Centered firmly on the Sangiovese grape, Chianti Classico DOCG remains an example of how historic regions can evolve and thrive in the modern wine industry.

This advertising content was produced in collaboration with SevenFifty and our partner, Chianti Classico.

The Chianti Classico DOCG is one of Tuscany’s most historical and heralded appellations, and the region many consider home to Italy’s most emblematic wines: the crimson-hued, Sangiovese-based reds of the same name.

Globally renowned for its high quality standards and timeless wines, the Chianti Classico DOCG remains a leader in quality and innovation with wines that simultaneously show traditional regional character and modern polish in each bottle. For centuries, growers here have perfected cultivating Sangiovese on a range of soil types, while stringent quality controls have made Chianti Classico a synonym for premium wine. Not to be confused with the broad Chianti DOCG, Chianti Classico DOCG is defined by its own unique set of quality controls and production regulations, resulting in truly singular, age-worthy wines.

With over 300 years of history and a monopoly on the Sangiovese grape in the minds of consumers, this historical appellation is continuing to raise the proverbial bar with strict quality controls and wines that defy expectations in terms of value, complexity, and character.

The geography of Chianti Classico lends itself perfectly to the cultivation of age-worthy red wines. Spread between the cities of Florence and Siena, this subsection of Tuscany is heavily forested—nearly two-thirds of the landscape is covered by pine, oak, chestnut, and cypress—and experiences a mild continental climate defined by broad diurnal temperature shifts. The appellation is bisected by several small rivers and streams including the Greve, Pesa, and Arbia rivers.

The soils across the region vary significantly, even within a single section of Chianti Classico, offering vintners a diversity of terroirs from which to produce multilayered and complex wines. Chianti Classico’s soils include layers of schistous clay (called galestro), marl (clay-limestone) rock (called albarese), and fine sandstone.

Generally, marl-based soil is most often found in San Casciano Val di Pesa, while lower-altitude areas like Greve in Chianti are typically dominated by clay-limestone soil. Large sandstone rocks can be found in the Monte del Chianti ridge, which forms the easter border of Greve in Chianti and Radda in Chianti, as well as the northern part of Gaiole in Chianti. The central-southern area of Chianti Classico is characterized by alberese, and sandy soils are typically found in Castelnuovo Berardenga.

Of course, the influence of these soils is noticeable in the Chianti Classico wines themselves. Alberese soils tend to produce wines that are rich and muscular yet fresh and elegant, while galestro yields wines with power and aromatic complexity. Elegance and smooth texture, along with floral and citrus accents, can be found in the wines from sandstone, and clay-rich soils produce wines with richness and roundness. Because many Chianti Classicos come from myriad soils, they often display unique combinations of these qualities.

The rolling hillsides of Tuscany are famous for inspiring Renaissance artists and philosophers, yet the region has been renowned for even longer as the source of wines for popes and kings. During the Roman era, Tuscany was an agrarian center, where olives, wheat, and grapevines were interplanted across the region.

The first written mentions of Chianti wine date to 1398, and historical documents show Chianti was an established red wine as early as 1427. The Chianti Classico DOCG as it’s known today was demarcated in 1716 by the Grand Duke of Tuscany, Cosimo III ‘de Medici. A truly original appellation, Chianti Classico’s long history of excellence is undisputed.

The black rooster symbol, which adorns all Chianti Classico wines, is likewise of historic significance. The Chianti territory was often battled over between the cities of Florence and Siena, and medieval lore states that the two cities embarked on a final test to define the boundaries: Two knights would ride toward each other, departing when a rooster crowed. The black rooster used by the Florentines crowed well before dawn, giving the Florentine knight an hours-long headstart. As a result, nearly all of Chianti Classico as it is known today became part of the Florentine state, and the black rooster emblematic of the region.

In 1984, the area was upgraded to DOCG—the highest quality demarcation for Italian appellations. Today, the consortium is made up of 480 members, of which 342 bottle their own wines. The Gran Selezione category of wines was added in 2013, and the region began its application to become a UNESCO world heritage site in 2016, 300 years after Cosimo III’s official acknowledgement  of the Chianti Classico area.

The modern wines from the area continue to fuse traditional techniques with modern technology, including traceability for all Chianti Classico wines. Each bottle must be adorned with a government-issue label on the bottle neck; this contains an alphanumeric code, which consumers can use to access the wine’s official chemical analysis and quantity bottled on the open database located on the Chianti Classico website. Chianti Classico DOCG’s commitment to quality, traceability, and transparency has led the region to produce consistently impressive wines that are considered staples on wine lists and store shelves in over 150 countries.

Because Chianti Classico DOCG wines have represented Tuscan wine globally for centuries, many drinkers simply refer to the wines as “Chianti,” but for consumers and sommeliers alike the differences between Chianti and Chianti Classico are profound. Chianti Classico is its own distinct and separate DOCG, with its own production regulations, production area, and consortium. As a result, it’s crucial to understand the diversity within Chianti Classico, which results from both the nuanced facets of this Tuscan terroir and its layered categories of production.

Chianti Classico Annata wine makes up the bottom tier of the Chianti Classico DOCG quality pyramid. Designed for early drinking, fruit-forward Annata wines must have a minimum 12% ABV and undergo 12 months of aging. The resulting wines are generally balanced right away and easy to drink, and present a mix of fresh fruit flavors and fresh floral tones.

Chianti Classico Riserva wines must meet all the basic requirements of Annata bottlings, but undergo extended aging of at least 24 months, including at least three months of bottle aging before release. The wines are also required to have a minimum ABV of 12.5%, and generally showcase similar fresh red fruit characteristics of Annata wines, but with clear inclination towards structure.

The Chianti Classico Gran Selezione designation, the highest quality indicator in Chianti Classico, was introduced in 2013 to showcase the DOCG’s finest wines. Gran Selezione wines must undergo a minimum of 30 months of aging—with at least three in bottle—and have a minimum alcohol level of 13%. In addition, these wines may only be produced with estate-grown grapes and must showcase regional typicity. As of 2022, these wines may only include indigenous black grape varieties and a minimum 90 percent Sangiovese grapes (versus the appellation’s general rule of 80 percent). A truly premium expression of Chianti Classico, Gran Selezione wines currently make up a mere six percent of Chianti Classico wines. These wines tend to be fruit-forward and spicy, balancing fruit, non-fruit, and tertiary elements in equal measure. Firmly structured, they are designed for long-term aging and enjoyment.

Wine producers are required to declare the intended designation—Annata, Riserva, or Gran Selezione—for their wines in advance, and all of the wines are submitted for testing before release to ensure each Chianti Classico wine meets the quality standards for each type.

Chianti Classico covers a patchwork of terroirs which lend the area’s wine producers pristine microclimates and exposures ideal for premium winegrowing. The resulting wines offer a range of earthy aromatics and bright red fruit flavors, yet all bear the regional signature of Chianti Classico: A lively backbone and structure provided by Sangiovese.

The Sangiovese grape reaches its apex in Chianti Classico DOCG wines, which by law must be at least 80 percent Sangiovese). The region’s flagship grape variety, Sangiovese is indigenous to Italy and gets its name from the Latin phrase sanguis Jovis, or “blood of Jupiter,” thanks to its bright ruby-crimson hue.

Sangiovese vines produce long, conical-pyramidal bunches with medium to large berries. Traditionally, the resulting wines are light in color, with naturally high acidity and a firm tannic structure that lends itself to extended aging. Sour cherry flavors and soft floral tones are characteristic of the fascinating variety.

While many Chianti Classico wines are made solely from Sangiovese, DOCG rules permit the use of indigenous and international blending grapes. By law, Chianti Classico DOCG wines may contain up to 20 percent Colorino, Canaiolo, Merlot, and Cabernet Sauvignon. Colorino and Canaiolo are Sangiovese’s historic blending partners, often used to add color to Sangiovese or soften the signature grape’s harsh tannins, respectively. In the ’90s, Bordeaux grapes became popular in Chianti Classico DOCG for their ability to add power and silkiness to the finished wines, but recently this has become more and more uncommon, as the scientific research on Sangiovese and other indigenous grapes (through the Chianti Classico 2000 project) yielded excellent results.

Today, the Chianti Classico DOCG is expanding upon its legacy for producing high-quality Sangiovese-based wines by implementing Unità Geografiche Aggiuntive (UGA), or Additional Geographic Units, across the appellation.

In 2021, the Chianti Classico Consortium recognized 11 geographical areas for their enological recognisability, historical authenticity, renown, and volume of production and these village names may be included on the wine labels for Chianti Classico Gran Selezione wines, starting from fall 2022. The villages  included are Castellina, Castelnuovo Berardenga, Gaiole, Greve, Lamole, Montefioralle, Panzano, Radda, San Casciano, San Donato in Poggio, and Vagliagli.

An increasing focus on these terroirs and educating consumers and trade about the nuances of Chianti Classico terroir, has elevated the historic Chianti Classico DOCG to new heights. Today, it remains an example of how historic regions can evolve and thrive.