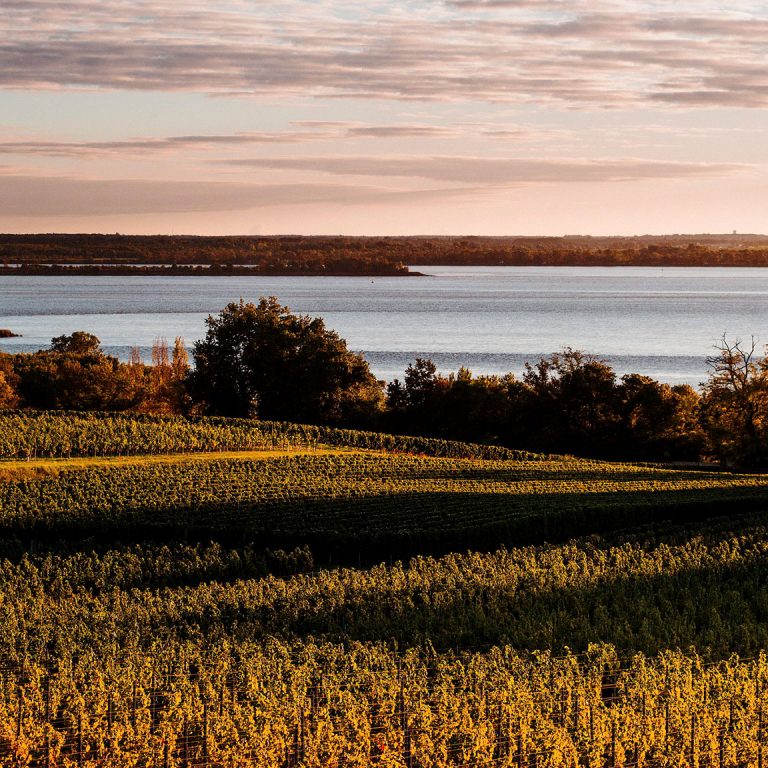 The five appellations under the Côtes de Bordeaux umbrella may be small, but they are mighty. Known for their easy-drinking style, they are also well-made wines from historic vineyards on sunny hillside slopes. Boasting some of the highest elevations in Bordeaux, each Côtes features its own character, blending tradition and unique terroir—as individual as the families who work the land for generations. Today, those are young winemakers with worldly training and knowledge, and a thoroughly modern attitude that gives this region its nickname, “Bordeaux in Blue Jeans.”

Previous
← Back to the beginning 0/0 Next

This advertising content was produced in collaboration with SevenFifty and our partner, Côtes de Bordeaux.

“Côtes de Bordeaux winemakers have the opportunity to mix things up, play and experiment,” says Yannick Benjamin, sommelier/owner of Contento Restaurants in New York City, and himself the son of a Bordelaise mother.

“They are part of the pedigree of Bordeaux, but are family wines with a unique story and identity to each one,” says Jeff Harding, wine director at Manhattan’s Waverly Inn, and a long-time proponent of the wines. “These are not second or bulk wines, but proper first wines of an actual estate—often family-owned, often progressive in their agriculture, and always a tremendous value.”

The Côtes de Bordeaux are known for agriculture on a human scale, where winemakers are close to their land, wine, and consumers. Benjamin says, “The light has historically been shined on the bigger properties, but there’s lots of warmth, integrity, and love in the smaller regions. The passion may be the same, but there’s a humility and an honesty in the Côtes de Bordeaux—something soulful about the place and the wines.”

While ancestral methods inform the process, the vignerons combine tradition and modernity. “Farming is at another level here: They respect the traditions, but are not bound to them,” Benjamin says.

The five appellations are spread out, forming an arc north, east, and south of the city of Bordeaux. The role of water dominates: Situated along the right banks of the historic Gironde, Dordogne, and Garonne rivers, the appellations are also influenced by their proximity to the Atlantic Ocean.

The five appellations take their names from “côte”—French for hill or slope—for good reason: the hillside vineyards, with altitudes up to 127 meters, are the highest in the greater Bordeaux area, which results in fresh wines with high acidity.

Similar to the Right Bank, the Côtes de Bordeaux feature clay-limestone soils and some with sandy gravel that, along with generally maritime climate conditions and southern and/or southeastern exposures, produce fruit-forward, Merlot-driven wines.

Though in a maritime zone, there is abundant sunshine and less rain than the more Atlantic-facing appellations to the west. On average, the Côtes de Bordeaux see 240 days of sun annually.

With vineyards planted by the Romans in the second century, the region has strong historic roots. The boom for the Côtes began in the Middle Ages with the marriage of Eleanor of Aquitaine and Henry Plantagenet, which opened up the English market for the wines. Wine was transported by waterway to England and Holland and heralded as luxury wines long before the Médoc vineyard was established. With the end of the English occupation and ensuing wars, wines from the Côtes were diminished. They were, however, rejuvenated in the late 17th century, as imports capable of enduring transport to the Colonies. Viticultural development of appellations began in the 18th century.

Today, nestled among those remnants of French history, small, family-owned estates define the wine landscape, with an eye toward scalable agriculture that respects the ancient lands.

The largest of the Côtes, and situated on the Gironde Estuary facing the Médoc area, Blaye occupies 6500 hectares across 41 communes. In the east, the soils are predominantly clay-limestone and to the north, sandy and gravel soils dominate, where the Sauvignon Blanc grape thrives. While the climate is largely temperate, maritime influence creates humid conditions.

With 430 winegrowers and three cooperatives, the average estate is 15 hectares.

Cadillac’s long, thin strip (60km long and only 5km wide) lines the Right Bank of the Garonne River, and traverses from north of Bordeaux to Langon. The hillsides slopes feature limestone soils covered with pebbly gravel on the peaks, clay-limestone at the middle and fine gravel mixed with silica at the foot of the slopes.

The appellation is comprised of 2,200 hectares in 39 communes, with 230 winegrowers, and one cooperative. The average estate is 11 hectares, and total production here is 105,000 hectoliters of red wines. Cadillac Côtes de Bordeaux is one of the only Bordeaux appellations requiring bottling at the château.

The third largest of the Côtes, its 2,300 hectares are spread over nine villages. Three cooperatives and 230 growers produce 100,000 hectoliters of red wines. The average estate is 10 hectares, and 25 percent of the vignerons practice organic or biodynamic agriculture.

An altitude difference spanning more than 100 meters gives Castillon a more varied climate and soil mix than its sister appellations. Alluvial soils on the edge of the Dordogne River transition to sandy-gravel-clay mixes, and then clay-limestone or marlstone on the higher hillsides. Microclimates here range from a humid maritime to continental on the higher elevations.

Castillon is a Merlot-driven appellation with 70 percent of plantings devoted to the grape, followed by 20 percent Cabernet Franc and 10 percent Cabernet Sauvignon. Sharing the same limestone plateau as Saint-Emilion, the wines here are similarly round, and fruit-driven with soft tannins.

AOC-designated in 1967, Francs was, until recently, the smallest and most eastern of the Côtes. It lies to the north of Castillon, and its proximity to Saint Emilion means it shares the renown fossil-rich limestone of its neighbors.

Francs is small but impressively diverse: 435 hectares traversing three communes, with some of the highest altitudes of the five appellations. Due to its inland and relatively northern position it experiences a dry continental climate—cold in winter and hot in summer. But with eastern-facing sunny slopes, low rainfall and protection from storms, the conditions are ideal for grape growing. It shares a limestone-clay soil profile with its southern neighbor.

It is one of only two Côtes de Bordeaux appellations that produces red, white, and sweet wines made from botrytized grapes.

The average estate is 10 hectares, managed by 41 growers and three cooperatives. Red wines dominate here—26,000 hectoliters of Merlot-driven (60 percent) wines, followed by 144 hectoliters of dry white and 50 hectoliters of sweet wines. Other reds include Cabernet Sauvignon (25 percent) and Cabernet Franc (15 percent). In the white varieties, Sémillon dominates with 60 percent, with Muscadelle and Sauvignon Blanc each at about 20 percent of production.

The newest, smallest, and most far-flung of the Côtes, Sainte-Foy, nonetheless has great diversity. Covering 350 hectares, with an average estate size of nine hectares, the 21 growers and two cooperatives cover the full gamut of red, white, sweet, and dessert wines.

Anchored by an intact medieval village, Sainte-Foy-La-Grande—a name that both belies and suits this small appellation—the vineyards are spread out over the communes, allowing for a diversity of microclimates, both maritime and continental.

The soils are mostly clay-limestone with some gravel closer to the river. Merlot dominates production at 65 percent (7,000 hectoliters), with Cabernets Sauvignon and Franc playing lesser roles at 17 and 15 percent, respectively, and Malbec accounting for three percent. Among white varieties, Sauvignon Blanc is a dominant player with 60 percent production, followed by Sémillon (30 percent) and Muscadelle (10 percent). Sainte-Foy’s sweet and dessert wines contribute 70 and 30 hectoliters respectively.

For the Côtes de Bordeaux umbrella designation, winemakers can make blends from different terroirs while respecting the AOC rules. The wines are packaged in traditional Bordeaux bottles, with many producers modernizing their labels to appeal to newer wine drinkers.

Wines from the Côtes de Bordeaux offer rich aromas with ripe fruit, roundness on palate with the velvety tannins characteristic of Merlot. They can be enjoyed young, but have enough structure for keeping in the cellar. The styles are versatile, Harding says, noting “Merlot is genius at pairing with vegetable dishes, as a bridge component for spices, root vegetables, nuts, lentils, and mushrooms.”

Part of the new focus on the Côtes is due to the energy infused into the region by its dynamic young winemakers. In this globally and progressively trained generation, enterprising young winemakers work alongside renowned oenologists, and with a growing number of women leading wineries, the future is bright—especially for female-centric wineries in this region.

“There has been an incredible resurgence in the last 20 years with a new generation of farmers who have come after working with other winemakers,” says Benjamin. “You get incredible terroir and the sophistication of the winemaker who has traveled, has been to oenology school, and has very strong global reference points.”

Chief among the activities is an increase in sustainable farming. Many producers are leading the way in practices such as pruning for climate change and yield control, disuse of systematic weeding, and avoiding chemical treatments. Approximately 80 percent of the producers practice some kind of sustainable farming and a number participate in initiatives such as Terra Vitis and AREA (Agriculture Respecting the Environment in Aquitaine). “The conversion is taking time as producers are understanding their own microclimates. But it is happening and will continue,” says Benjamin. “The majority of Bordeaux producers are intrigued and they see the value in opportunity on saying ‘we are an organic farm.’”