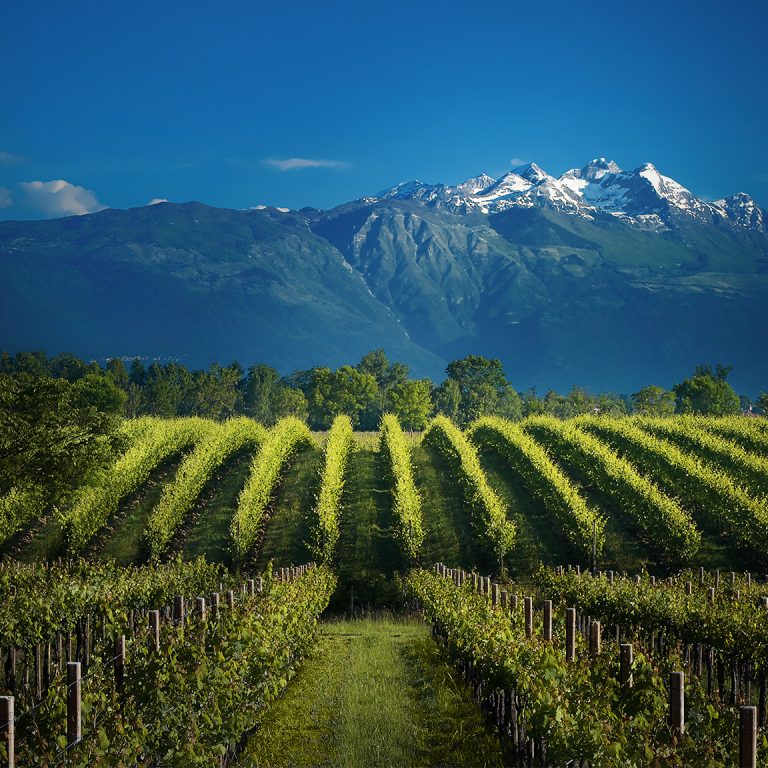 The producer of one of the world’s most popular sparkling wines, Italy’s Prosecco region is experiencing an exciting renaissance. The appellation has long been renowned for its bright, crisp wines, made primarily from the white Glera grape, and thanks to a rededication to place, variety, and sustainability—Prosecco is reclaiming its identity as one of Italy’s most versatile and enjoyable wines.

This advertising content was produced in collaboration with SevenFifty and our partner, the Prosecco DOC Consortium.

The biggest change to the Prosecco region in recent history was perhaps the all-encompassing upgrade of the region in 2009 from Indicazione Geografica Tipica (IGT) status to Denominazione di Origine Controllata (DOC), which affected nine provinces. That same year, the Italian government also upgraded the Prosecco di Conegliano e Valdobbiadine DOC zone to a Denominazione di Origine Controllata e Garantita (DOCG). In addition, the regulations called for yields in the newly designated zones to be reduced to help improve quality.

The protected status of the Prosecco DOC not only distinguishes wines produced in the region as authentic but prohibits others from falsely labeling their products as Prosecco in an attempt to benefit from its reputation. The newly recognized Prosecco DOC Rosé boasts the same distinction of authenticity and also includes the Millesimato mention and year of harvest.

Located in Italy’s northeast corner, south of the Alps, the Prosecco region is situated in the plains between Friuli-Venezia Giulia and Veneto, nestled between the Dolomite Mountains and the Adriatic Sea. The Prosecco DOC comprises nine provinces: Belluno, Padua, Treviso, Venice, and Vicenza in the Veneto region, and Gorizia, Pordenone, Trieste, and Udine in the Friuli region.

Warm, sunny days and cool evenings during growing seasons are moderated by sea influences, resulting in long ripening days for the grapes and the diurnal temperature shift needed to produce aromatic, high-acid wines. Annual average rainfall is about 60 inches.

Originally alluvial, the soils have evolved over centuries to their present composition, which is mostly clay-loam that’s rich with minerals and microelements. Today the soils vary from calcium-rich marl and flysch sandstone in the hilly regions to clay, sand, and gravel in the valley and plains.

Prosecco dates to Roman times and was well regarded by the scholar and philosopher Pliny the Elder, who mentioned the wine in his Historia Naturalis. The 18th-century Italian poet Aureliano Acanti wrote that he wanted to “sacrifice my mouth for that apple-aromatic Prosecco.”

Although the name Prosech, or Prosecum, has roots in the 13th century, it wasn’t until the late 19th century that the name Prosecco was given to a sparkling wine. Three figures were prominent in the evolution of the wine: Federico Martinotti and Eugene Charmat, who developed the secondary-fermentation tank methods, and Antonio Carpenè Sr., a chemist who refined those methods and created industry standards. Carpenè is credited as the Father of Prosecco, having also established the Oenology School of Conegliano in 1876—the first school of viticulture and enology in Italy and still the region’s top winemaking institution.

Up to the 1960s, Prosecco was produced slightly sweeter than the wine we know today. But improved viticulture and production methods have shifted Prosecco to a drier, more elegant style that is enjoyed throughout the world and has become synonymous with the Italian lifestyle.

Prosecco DOC grapes are primarily Glera, a late-ripening, straw-colored grape known for its high yields. In the 18th century, Glera cultivation expanded throughout the hills of Veneto and Friuli; it later spread to the lower-elevation areas.

In addition to Glera, DOC regulations allow the addition of up to 15 percent of the following grape varieties: Verdiso, Bianchetta Trevigiana, Perera, Glera Lunga, Chardonnay, Pinot Bianco, Pinot Grigio, and Pinot Nero. Prosecco DOC Rosé is a combination of a minimum of 85 percent Glera and 10 to 15 percent Pinot Noir grapes vinified as red.

The Appellation and Key Styles

Under the DOC designation, Prosecco is made primarily from Glera vines cultivated in the region, and the resulting wines must be produced and bottled in the area. There are two special mentions, however. Wines produced and bottled in the historically important provinces of Treviso and Trieste may be labeled Prosecco DOC Treviso and Prosecco DOC Trieste. Sparkling wines make up 75.2 percent of the region’s total production, while semi-sparkling wines make up nearly 13.4 percent and still wines account for less than 1 percent.

Depending on the level of pressure used during production, Prosecco DOC can be made in spumante (sparkling), frizzante (semi-sparkling), or tranquillo (still) styles. Prosecco DOC Rosé is always spumante. Spumante is the bubbliest of the three, with more than three atmospheres (atm) of pressure inside the bottle, while frizzante has one to 2.5 atm and tranquillo less than one atm.

The three styles of Prosecco DOC (Frizzante, Tranquillo, and Spumante) have fine, persistent bubbles and show apple, rose, and banana notes. Frizzante and Tranquillo are produced in limited quantities compared to the most popular and widespread style of Prosecco DOC, Spumante, which is also further defined by its sugar content (grams per liter) as follows.

Prosecco is at its youthful prime when drunk the year after harvest and is best served chilled in a large tulip-shaped glass that allows a full expression of the wine’s aromas.

Prosecco DOC wines are vinified using the Martinotti method (also referred to as the Charmat, or tank method), in which secondary fermentation takes place under pressure in large steel tanks known as autoclaves.

The grapes are typically harvested during the first weeks of September, when sugars, acidity, and aromatics have reached their peak. After harvest, the grapes are crushed and separated from their stems in preparation for soft pressing. Selected yeasts start the fermentation process, which lasts 15 to 20 days and is maintained by a constant temperature of 18 degrees Celsius to preserve the delicate aromas of the grapes.

Whereas the traditional, bottle-fermented production method for sparkling wines produces a brioche-yeasty character, the Martinotti method captures Glera’s fresh, fruit-forward nuances. Prosecco wine produced from this method is bright straw yellow, and in the case of Prosecco Rosé, pale pink, with fine, persistent perlage. A youthful wine, Prosecco is known for showing aromas of white flowers, apple, and pear, along with honeysuckle and other floral notes. Prosecco DOC Rosé has a similar flavor profile, further enriched by hints of raspberry thanks to the Pinot Noir. Additionally, the mouthfeel of Prosecco DOC Rosé is round and soft, but with greater structure. Most Proseccos have moderate levels of alcohol—around 11 to 12% ABV.

Explore the wines of Prosecco

The Prosecco DOC Consortium promotes and protects the reputation and tradition of this historic sparkling wine, and it has instituted a strict system of identification and authentication. These measures include a government seal that is applied to each bottle.

The seal is applied onto the closure of the bottle in a way that prevents the seal from being used again while also preventing the contents of the bottle from being removed withoutbreaking the seal. The label guarantees that the Prosecco has been produced in total compliance with production regulations and approved provinces. Typically a guaranteed bottle will include the following authentication on the label:

Moreover, Prosecco DOC can only be sold in glass bottles and never on tap or in can.

2021 data confirmed positive news for Prosecco DOC, with an increase of 25.4 percent in total production by volume for a total of 627.5 million certified bottles of Prosecco DOC produced—of which 71.5 million bottles were produced as Prosecco DOC Rosé. Most significantly, 2021 data revealed increasing premiumization of the category, with an increase of four percent in the U.S. dollar value for the average bottle exported in 2021.

The Consortium has taken a forward-thinking attitude toward sustainability, long-term productivity, and climate change. Over the past few years, it instituted programs to address these and other environmental issues and pushed to prohibit the use of chemicals such as Mancozeb, folpet, and glyphosate.

Recently, the Consortium has introduced a collaboration with industry professionals that supports winegrowers in improving vineyard management, achieving better yields, and identifying the best organoleptic properties for high-quality sparkling wines. It also launched a separate study that aims to evaluate soil and climate, identify macro-areas, and experiment with vinifications to further identify associations between grapes, wines, and their place of origin. Additional research will focus on improving wine quality through new techniques in the cellar.

The Consortium has joined Mosaico Verde, a program that aims to increase biodiversity in the region by planting 300,000 new trees, in addition to protecting 30,000 hectares of existing forest. Other programs reward producers that incorporate hedges and groves to improve the biodiversity of the terroir.

With the support of Condifesa Treviso, an agricultural organization, the Prosecco DOC Consortium developed a Winemaker’s Handbook that is updated annually with information about sustainable strategies for vineyard management. The Consortium’s increasing attention to environmental issues emphasizes its challenge towards constant innovation, involving the productive system in a path of environmental, social, and economic responsibility.

The Consortium is making a concerted effort to raise Prosecco’s profile in the U.S. with a series of events and promotions. In 2018, the Consortium launched the first National Prosecco Week which has increased in popularity throughout the following years. National Prosecco Week is a nationwide campaign with both digital and in-person experiences, which includes retail and restaurant partnerships, and media and consumer campaigns with a focus on consumer events and sponsorships, targeted media relations and marketing, strategic media partnerships, and dynamic social media and influencer activations. All activities aim to educate the audience on how to identify authentic Prosecco DOC, further elaborate on the growing Prosecco DOC Rosé category, and showcase the versatility and pairability of each.

Prosecco has long been the base of the famous Bellini cocktail and the Venetian Spritz, and the Consortium’s Italian Genio program recently commissioned the development of new Prosecco cocktails, created by Italian mixologists. Prosecco DOC wines have also been embraced for their versatility—fresh and well-balanced, they pair well with a variety of cuisines from around the world.

Casa Prosecco DOC USA is the official source of news and information about Prosecco DOC in the U.S.; the site is regularly updated with information on new regulations, initiatives, harvest reports, and export data.

From Master Sommelier to Master of Wine and everything in between, there are plenty of ways to learn about wine. Compare costs, pros, and cons for each

Kicking off its sixth year, the #JLohrWomen Campaign aims to bring new talent and ideas into the industry with an event series and educational opportunities