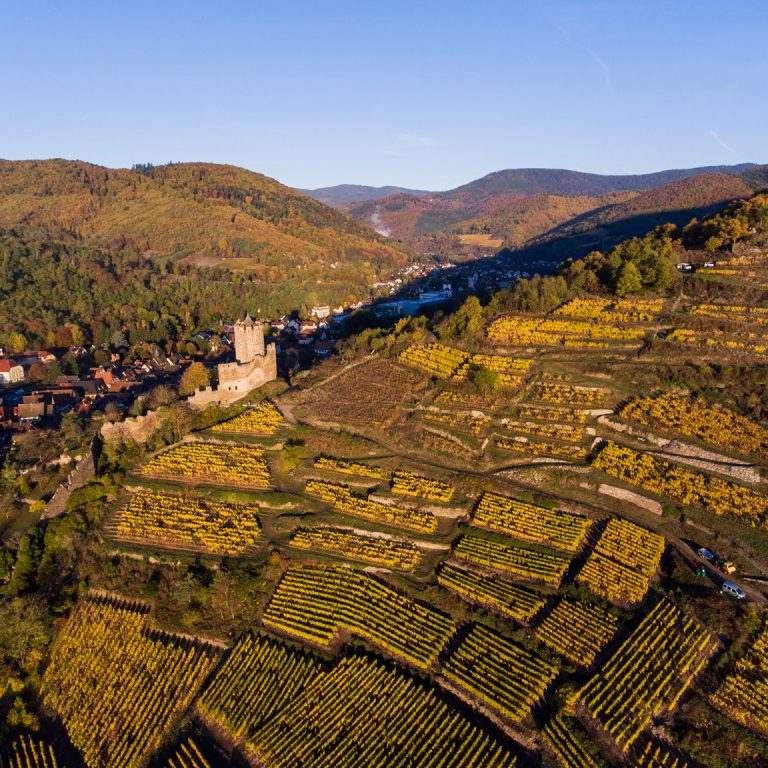 After a long period of border conflict between France and Germany, this French region developed a strong identity centered on gastronomy, wine, and sustainability. With those assets, today’s winemaking families have a clear understanding of how their unique terroir—a mosaic of more than a dozen ancient soils—transmits distinct characteristics into wines that cannot be made anywhere else on earth. There’s good reason that claims of pure expression are made for these wines: Few other regions offer such communicable profiles of minerality, fruit, florals, spice, and earthiness. Today, Alsace produces some of the world’s most intriguing, diverse, and terroir-transparent wines.

Previous
← Back to the beginning 0/0 Next

The modern history of Alsace is a lesson in geopolitics, as the territory was passed back and forth across the French-German border—in 1871, during the Franco-Prussian War; in 1919, after the Treaty of Versailles; and again during the Second World War. It was finally returned to France in 1945, at the end of World War II. Today, many people in Alsace have German names, as do many towns, but the local identity and land are firmly French.

Over the years, the wine industry of Alsace suffered an existential crisis—its vineyards were destroyed at various times by war as well as phylloxera, and wine production hit a low in quality during times of war when it was mass-produced and blended with German wines.

But the region reclaimed and rebuilt its vineyards. By 1962, Alsace received Appellation d’Origine Contrôlée (AOC) status. Just 13 years later, Schlossberg was the first vineyard to receive Grand Cru status. And within only eight more years, 24 additional vineyards had received the same status, setting the region on its path to the production of high-quality and distinctive wines that told the story of their terroir. Today the region boasts 51 Grands Crus that are delimited according to strict geological and climatic criteria.

Eighty miles in length and 10 miles wide, and situated in France’s northeastern corner between the Rhine River on the east and the Vosges Mountains to the west, Alsace possesses a cool continental climate. The mountains, which once shared a grand massif with Germany’s Black Forest, provide a backdrop that defines both the stunning landscape and the region’s wine production.

The mountains protect Alsace from maritime weather patterns, effectively blocking rain and humidity, which helps make the region one of the sunniest, driest in France—second only to Roussillon, in the south. The longer, drier growing season, coupled with cool nights, allows fruit to reach optimal ripeness and endows it with the bracing acidity that characterizes the wines of Alsace.

The region is divided into two departments: Bas-Rhin in the north, and Haut-Rhin in the south. Vineyards run north-south on the eastern slopes of the mountains at altitudes from 175 to 420 meters. There are approximately 15,600 hectares under vine. In 2020, 127.5 million bottles (or 10.6 million cases) were produced in the region. About 90 percent of the AOC wine production is white, and it represents 18 percent of total still white wine production in France.

What really sets Alsace apart from all other wine regions is its complex geology, the result of eons of turbulent history that combines marine and river deposits, numerous sedimentary layers, and the aftermath of periods of erosion. Researchers have mapped 13 distinct soil types—ranging from mineral-rich granite, limestone, and schist to volcanic and sandstone—from eight parent rocks. Each imparts its own character to the wines. 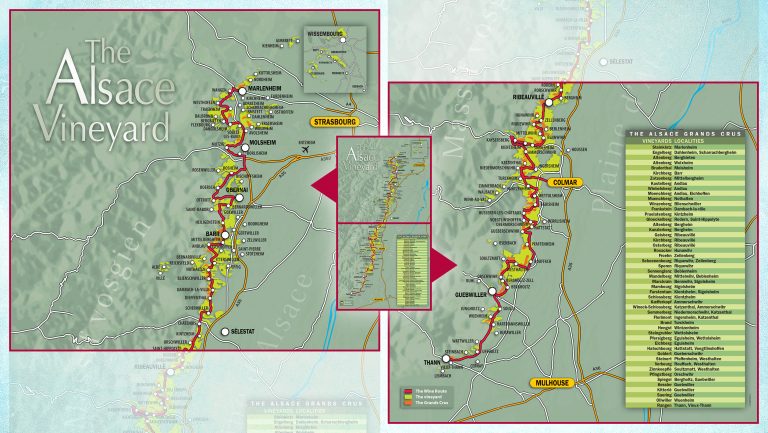 Alsace’s appellation system is the only one in France that predominantly produces single-varietal wines—and labels them as such. Since 1972, Alsace law has required the wines to be bottled in the region of production, using the distinctive tall, flute-shaped bottle.

There are 53 appellations in Alsace, distributed among these categories.

In exceptional historic plots, such as clos (walled vineyards), AOC wines may be labeled lieux-dits to indicate their geographic significance.

Located on the upper parts of the vineyards, and explicitly linked to their micro-terroirs, Alsace’s Grands Crus express their own geological identities and vineyard characters. The wines from these crus range from structured and powerful to finely etched and nuanced.

Production rules are strict: Only Riesling, Muscat, Pinot Gris, and Gewurztraminer may be bottled as single-varietal, single-vineyard Grands Crus. There are a few exceptions, however. Prescribed blending, for example, is permitted in the Altenberg de Bergheim and Kaefferkopf vineyards. The Sylvaner grape is permitted in Zotzenberg, a quality historical site for the variety.

Alsace’s wines have more in common with their German counterparts than with the wines of the rest of France. The region cultivates seven white varieties that, for the most part, don’t grow elsewhere in the country. (It also produces Pinot Noir, the only red variety authorized for the region.) The wines are mostly unblended—each is made from a single grape variety—and without the use of heavy oak. Alsace producers are proud of their tradition of century-old, neutral foudres, in which the wines age without oak influence.

In terms of production and prestige, Riesling, which accounts for 20.9 percent of the region’s plantings, is king in Alsace, and the region boasts many of the world’s most iconic examples. The hallmark of the wines is their piercing expression of terroir: No other grape transmits the qualities of its territory so transparently. It’s an early-ripening grape that takes on the site-specific minerality of the places it’s cultivated. Diurnal shifts allow the fruit to develop citrus, stone fruit, and floral characters while preserving freshness. Prized for its tight structure and bone-dry elegance, Riesling is compatible with diverse cuisines. It has a singular ability to age for decades, developing rich, honeyed complexity.

Though it’s grown elsewhere in Europe, the pink-toned Gewurztraminer grape finds its spiritual home in Alsace and represents 19.7 percent of the region’s plantings. The Haut-Rhin’s heavier, clay soils give Gewurztraminer body. Styles range from off-dry to dry, but the wines always express classic notes of rose petals, lychee, tropical fruit, sweet spice, and clarity of fruit. Generally less acidic than Riesling, depending on where it’s planted—limestone soils, for example—Gewurztraminer can show good acidity along with the power of its fruit.

Historically considered a workhorse grape, Pinot Blanc makes up 21.5 percent of Alsace’s plantings and has come into its own as a refreshing, food-friendly wine. It’s used mainly for Crémant d’Alsace, but several producers make still wines from the grape—often blended with Auxerrois (but still called Pinot Blanc). With controlled yields and careful viticulture, Pinot Blanc produces a wine that can be enjoyed as an apéritif or paired with notably difficult items such as egg dishes and asparagus.

Pinot Gris from Alsace is the opulent, rich, sophisticated counterpart to the lighter-weight Pinot Grigio, which is the same variety. While not as aromatic as Gewurztraminer, wine produced from this easy-ripening gray-colored (gris) grape conveys woodland earthiness, smokiness, and honeyed notes, and is almost viscous on the palate. With some age, it becomes deep gold in color. Though dynamic as an AOC wine, its full expression of intrigue and complexity is best expressed in Grands Crus. Approximately 15.7 percent of Alsace’s vineyards are planted with Pinot Gris.

Though references to this red grape date to the 15th century, it wasn’t until recently that Pinot Noir began to yield high enough quality wines in Alsace to gain traction in the market. Warming climatic temperatures have led to better ripening, and a new wave of winemakers has focused on producing better-quality versions of the region’s only approved red variety. Though the grape was historically used for crémant, the still Pinot Noir wines of Alsace are now garnering attention on the international stage for their vibrant red fruit notes and minerality. Pinot Noir makes up 11.2 percent of Alsace’s plantings.

Sylvaner finds its home in Alsace as a fresh, light wine with delicate flavors and good acidity. Clear, with tinges of green, Alsace wines made with Sylvaner are lively and easy to drink—as an apéritif or with the regional staple of white asparagus. It’s the only non-noble grape allowed as a Grand Cru wine, but only on the Zotzenberg vineyard. Sylvaner accounts for 5.1 percent of the region’s plantings.

Often overlooked, Auxerrois is made in small amounts, mostly for blending. But for those who give it time and attention as a single-varietal wine—particularly when made from old vines—the results are impressive, with some samples expressing orchard fruits, linden and acacia blossoms, and hazelnut. Made in very small quantities (2.3 percent of production), Muscat in Alsace is fermented dry and often blended from two historic variations in this grape family—Muscat à Petits Grains and Muscat Ottonel. Chardonnay plantings are minuscule, and the grape is used only for crémant production.

Alsace Blends and Other Alsace Styles

The AOC Alsace category allows two unique blends: Edelzwicker, which translates as “noble mixture,” and Gentil. The latter is a superior designation that requires a minimum of 50 percent noble grapes in the blend.

Alsace also produces rich, concentrated late-harvest styles: Vendanges Tardives (VT) and the more rare Sélection de Grains Nobles (SGN), both of which must be produced from the noble grapes. Made only in optimal years, these exceptional wines have enormous aging potential—they maintain their acidity and brightness for decades.

Alsace is positioned to be at the leading edge of discovery, as consumers increasingly gravitate toward smaller, Earth-friendly production methods and the “know thy farmer” movement. In France, no other region can compete in both these arenas: One-third of all Alsace vineyards are certified organic or in conversion, a whopping 33 percent increase compared to 2019, making it one of France’s greenest wine regions. A small faction of growers has created Alsace Crus and Terroirs, or ACT, an association devoted to promoting the region’s terroir and sustainable farming practices.

Two additional organizations representing Alsace in the wine world are Les Jeunes Vignerons Indépendants, an association of young Alsace wine producers, and Les DiVINes d’Alsace, a group of women wine professionals devoted to producing, promoting, and selling Alsace wines. And a major hallmark of Alsace is its multigenerational domaine ownership, with many wineries boasting 14-plus generations of continuous operation.

The United States is the third-most significant export market for Alsace in terms of value. In volume, the U.S. is the sixth-most important market. Crémant d’Alsace sales continue to grow each year. France remains the primary consumer market, accounting for 78 percent of sales, but the U.S. is the third most important market for Crémant, behind Belgium and Germany, historic powerhouses for sparkling consumption. Moreover, the interest in Crémant d’Alsace has created new categories, such as Émotion, a regional prestige cuvée introduced in 2009, and single-vineyard, terroir-driven crémants.

As previously noted, Pinot Noir continues to be a significant development in Alsace, as quality has evolved and climate change has allowed for enhanced ripeness. There’s a push to obtain Grand Cru status for Pinots made in certain vineyards.

Also being considered is a proposal to create a Premier Cru status for Alsace. Still under review by the Alsace Vintners Association, the proposal would also have to gain approval further up the regulation hierarchy.

Nearing its 70th anniversary, the 106-mile Alsace Wine Route winds its way through more than 100 wine villages and is one of France’s most established itineraries dedicated to enotourism.