Opening a bottle of wine is more than just the simple act—it’s a ritual that signals the enjoyable experience ahead. There’s something satisfying about cutting the foil, twisting the screw into the cork, and hearing the slight pop that comes with a gentle pull of the wrist. And beyond the romanticism of opening a cork-sealed bottle, data shows that wines with these closures age better, taste better, and sell better than those sealed in other ways.

Globally, some 70 percent of all wines are closed with cork seals. For quality wines, that figure is even higher: 89 percent of Wine Spectator’s Top 100 Wines in 2016 featured cork closures. Throughout the industry, winemakers, sommeliers, and retail shop owners agree: When it comes to wine closures, cork is the best choice.

Natural-cork closures are the first choice for countless winemakers who have conducted side-by-side tests. These natural corks work so well because the oxygen contained in the cork diffuses into the bottle at a predictable rate, interacting with the wine and allowing it to develop and reach its full potential as envisioned by the winemaker. This measured oxygen infusion is crucial for ageability—it occurs reliably with natural-cork closures, not at all with screw caps or plastic-glass seals, and too quickly with many synthetic corks.

Maggie Kruse, the associate winemaker at Jordan Vineyard & Winery in Healdsburg, California, recounts an experiment that compared screw caps and corks for the bottling of the winery’s 2001 Chardonnay. Ten cases of wine were closed with screw caps, and the remainder were sealed with natural corks. Winemaker Rob Davis and his staff tasted and evaluated both sets of wine every few months for five years. In the end, the Jordan team unanimously agreed that the aromas, bouquet, and flavor profile of the cork-sealed wines were significantly better than those of the wines sealed with screw caps. “[The wine] tasted bright and crisp upon release,” says Kruse, “but after a few years in bottle, the screw-cap wine lacked the vibrancy and complexity of the Jordan Chardonnay sealed with natural cork.”

At St. Francis Winery in Sonoma, California, several closure trials resulted in the adoption of natural corks for all the wines. “From our experience in evaluating wine [through] different closure trials, we see wines bottled with natural-cork closures are able to retain better color and a slower rate of oxidation in both tannin and aroma over time,” says Katie Madigan, one of the St. Francis winemakers. “We believe that natural cork still holds the title for highest quality in the long term.”

It’s not just winemakers: Wine trade professionals overwhelmingly prefer cork, according to a recent Wine Opinions study conducted for on-premise and off-premise buyers. A staggering 99 percent of off-premise respondents surveyed agreed that natural cork indicated a high quality of wine, while 82 percent stated a preference for natural-cork seals on bottles that sell for $15 SRP or more. On-premise respondents shared a similar opinion, with 91 percent preferring natural cork for their wines listed at $30 and up.

A newly released study in the peer-reviewed scientific journal Beverages yielded the first empirical evidence that people rate wine higher for quality when it’s served in cork-stoppered rather than screw-capped bottles. The blind taste test experiment, conducted at Oxford University’s Department of Experimental Psychology, featured 140 participants who were asked to rate wines after hearing either the sound of a cork popping or the sound of screw cap being unscrewed before tasting a wine. The results showed that the vast majority of those questioned preferred the taste and flavor of the wine from a cork-stoppered bottle. The mere sound of a cork popping significantly increased the participants’ perception of the quality of the wine. The effect was even greater in the case of lower-priced wine, with a quantifiable, 15 percent improvement in perceived quality.

But does consumer preference for cork translate into increased sales for cork-sealed bottles? The trade organization APCOR conducted an experiment in 2017 at one of the most acclaimed independent retailers in the U.S., Gary’s Wine & Marketplace, a major New Jersey company with multiple locations and the winner of Market Watch’s Retailer of the Year 2014 and Beverage Dynamics’ Retailer of the Year 2012, to determine whether or not customers gravitated to wine bottles with cork seals. Across three of Gary’s locations, wines like Fisch Sauvignon Blanc and Go Figure Lot 40 Red Blend were decorated with neck hangers, printed on actual cork paper, extolling the virtues of cork. Over the course of four weeks, sales of the neck hanger–adorned bottles were compared with those of other wines in their category. At the end of the study, the wine bottles with neck hangers showed a collective 46 percent increase in sales. 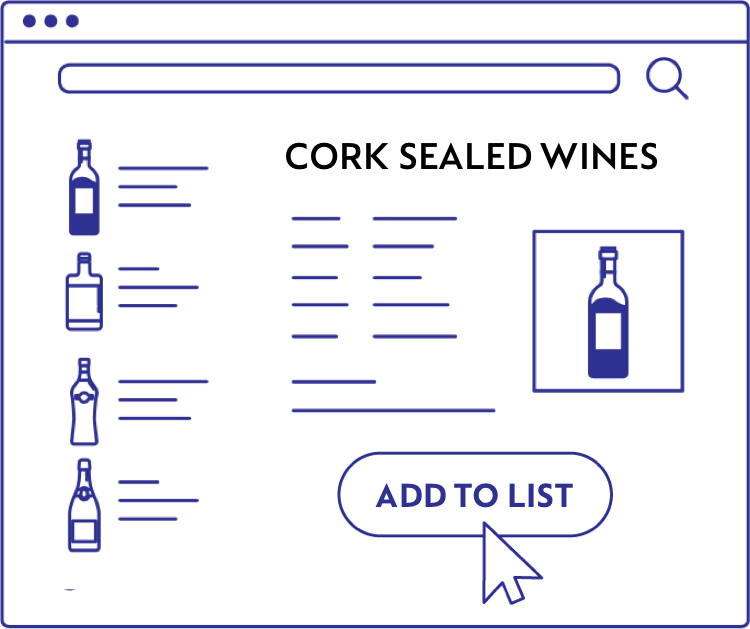 Winemakers also see this preference play out. “We feel that our customers prefer a high-quality cork on the best wines,” says Richie Allen, the director of winemaking and viticulture at Rombauer Vineyards in St. Helena, California. “Our customers expect it, and we feel it’s the best natural closure available.”

Added to all this is the romance of cork. “I think some people still enjoy the ceremony and mystery of removing and examining the cork,” says Tim Bell, the winemaker at Dry Creek Vineyard in Healdsburg.

Similarly, Madigan, of St. Francis Winery, also appreciates the keepsake value of corks. “It’s the only part of wine you get to keep at the end of an empty bottle!” she exclaims. “When people look at a cork, it’s often attached to the memory of when, where, and what they drank. You don’t see that with other closures.”

Cork is a 100 percent renewable and sustainable natural resource, able to be harvested every nine years without damage to the trees. When one harvest is complete, the cork tree immediately begins to regenerate new bark. Nine years later, that bark is ready to be harvested again, completing a cycle that can be repeated for up to two centuries. As bark grows back, it removes carbon dioxide from the atmosphere, making the product carbon negative—and an important ally in the fight against climate change.

The positive environmental attributes of natural cork have been recognized by the World Wildlife Fund, the Rainforest Alliance, and the International Organisation of Vine and Wine (OIV), the world’s governing body for global wine production. In fact, OIV’s 2011 resolution to help address the harmful effects of climate change encouraged wineries to use cork as a means to reduce the carbon footprint of bottled wines.

The sustainability of cork appeals to many winemakers, including Bell, of Dry Creek Vineyard. “Not only can the trees be harvested multiple times, providing a renewable resource,” he says, “but they are also good for the environment. They provide our world with oxygen and provide a habitat for various species, sometimes endangered ones.”

Madigan points to the work of the cork-recycling organization ReCORK, which has some 3,000 locations across the country where consumers can drop off their corks. ReCORK has recycled and repurposed more than 75 million corks, transforming them into consumer products like shoes. Another prominent cork-recycling organization, Cork ReHarvest, has for the past decade worked closely with retailers, hospitality groups, and wholesale importers and distributors to create cork-recycling programs.

Cork, along with its association with wine, embodies an important sense of heritage while helping to preserve our world’s natural resources—and all while making wine taste better, sell better, and age better. That’s why cork is preferred by wine professionals around the globe.

From sustainability standards to market engagement, Bouchard Père & Fils and William Fèvre are setting new benchmarks in the historic region

Backed by an established history, a penchant for experimentation, and an array of distinctive terroirs, New York State is proving itself as a formidable winegrowing region on the world stage.

This advertising content was produced in collaboration with SevenFifty and our partner, Wines of Roussillon Tucked into a southern corner of France, nearly crossing over the Spanish border, Roussillon is an overlooked wine region that’s now making its way into the spotlight. France’s last remaining viticultural frontier, this wild region has its own distinct identity—and … Continued