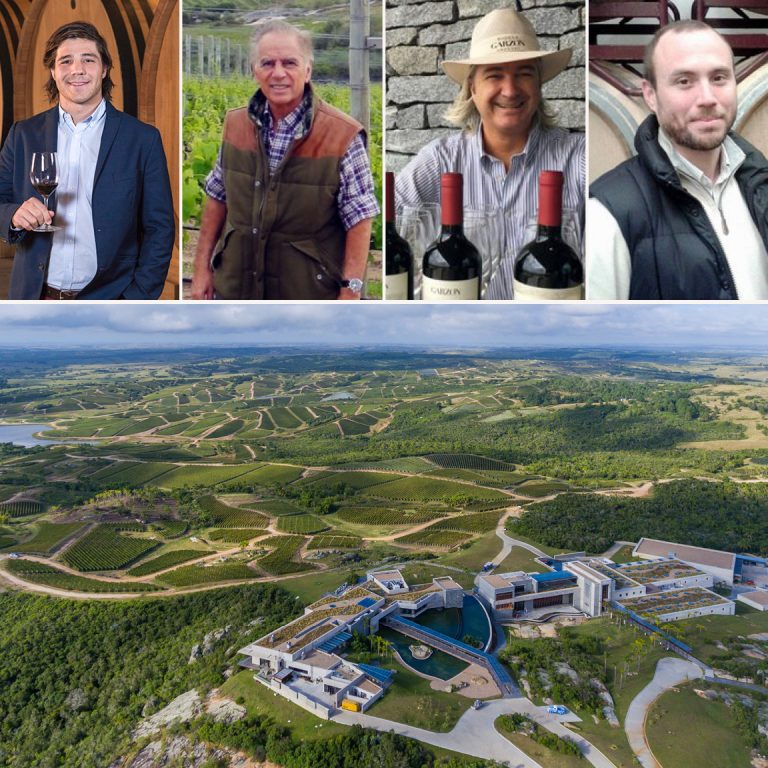 When Bodega Garzón proprietor Alejandro Bulgheroni and his wife, Bettina, first visited the area of Garzón in Uruguay’s Maldonado province, they imagined its potential as a Tuscany-like wine region. Soon after, with Italian winemaker Alberto Antonini, they conceived of the vision for Bodega Garzón.

The Evolution of Bodega Garzón

In 2007, Bulgheroni and Antonini began sizing up the region’s terroir. After settling on a number of grape varieties that they felt would be best suited for its microclimates, they set to work getting the first 29 hectares of vines into the ground. Since the fall of 2008, an additional 213 hectares have been planted in more than 100 blocks, each with its own distinctive soil composition, row angles, and trellising. Antonini is assisted in the bodega’s winemaking by local enologist Germán Bruzzone and agricultural engineer Eduardo Felix. “It’s a stunning vineyard,” says Bodega Garzón’s managing director, Christian Wylie, “with [viticulture] trials on 1,500 parcels.”

Garzȯn is located near the southeastern coastal tourist areas of Punta del Este, La Barra, and José Ignacio, and its terroir is characterized by its thin, rocky, mineral-rich soils, gently sloping aspects, and mild but cool climate with moderating effects from the Atlantic Ocean.

Construction on Bodega Garzón’s state-of-the-art LEED-certified winery began in 2011. The winery is designed for energy efficiency, reduced water consumption, and low emissions. Its facilities feature a restaurant, directed by Francis Mallmann, that specializes in open-fire cooking, an olive oil–pressing operation, and a golf course. “All of this,” says Wylie, “is just 10 miles from José Ignacio, the jewel within the coast of Punta del Este.”

Since joining Pacific Highway in September 2017, Bodega Garzón’s exports to the American market have more than doubled, from 4,000 cases to an expected 10,000 in 2018. The brand was also selected as the exclusive supplier of wines from South America at the Conmebol house in Moscow during the 2018 FIFA World Cup in Russia.

Selling Bodega Garzón by the Glass

As a wine region, Uruguay remains under the radar for most American consumers, but Wylie considers that to be something of an advantage. “More and more consumers want to experiment,” he says, and Uruguay is “a new, 21st-century terroir discovery—there’s a sense of magic here.”

Wylie suggests positioning wines like the Pinot Noir Rosé Reserva 2018, the Albariño Reserva 2017, and the Tannat 2015 Single Vineyard on by-the-glass menus as “discovery wines.” Not only will they appeal to adventuresome imbibers, he says, but anyone who tries them will appreciate that they’re top-quality, approachable wines that offer excellent value.

“Bodega Garzón’s wines are definitely food wines,” Wylie adds, “but it’s their drinkability that makes them such great BTG options.” He describes the 100 percent Pinot Noir Rosé Reserva 2018 as a perfect sunset sipper. “It’s light salmon in color, extra fresh with notes of cherries and strawberries, and has a long finish—ideal for pairing with oysters.”

The Albariño Reserva 2017 is another single-varietal wine. “This vintage exudes the chic elegance of the local beach town José Ignacio,” says Wylie, adding that the wine has “bright minerality; peach, citrus, and jasmine notes; and a touch of salinity. It’s great paired with the fish of the day or, better still, with octopus.”

The 100 percent Tannat 2015 Single Vineyard is a powerful and elegant wine with notes of cherry, strawberry, black plum, tobacco, and dark chocolate. It’s aged on the lees in French oak barrels and casks for 12 to 18 months. The vineyard where the Tannat is cultivated is cooler than other blocks on the estate, and its vines are planted on some of Bodega Garzón’s steeper slopes. This award-winning vintage, says Wylie, has “velvety tannins and smooth, savory, and spicy flavors, as well as minerality and grip.”

Best Summer Sippers by the Glass from Pacific Highway

Dedicated to introducing the world’s wine lovers to distinctive bottles from family-owned brands around the globe, Pacific Highway Wines & Spirits is a specialized import, sales, and marketing agency that seeks to build meaningful relationships with distributors and on- and off-premise buyers.