Update: While no formal resolution has been announced, on Monday, January 20, the U.S. and French presidents agreed to reach a compromise on tariffs related to the digital tax dispute—for now. On February 14, the USTR officially announced there would be no tariff increases on the EU wines and spirits currently subject to a 25 percent tariff related to the Airbus dispute, and that these tariffs would be revisited in 180 days.

“There is a massive P.R. problem in the wine industry right now with fake news reports and bad information being passed from one person to another,” says Daniel Posner, president of the National Association of Retailers and owner of the White Plains, New York retail store Grapes the Wine Company.  Posner is one of the group’s founders and has been dismayed by the number of incorrect news stories and misinformed industry people he has encountered of late: “Many people think that because Macron and Trump came to a truce on the Digitax and French Luxury Goods tariff on January 20, that tariffs are off the table. They couldn’t be more wrong.”

Posner teamed up with other concerned east coast members of the industry, including Ben Aneff of retail store Tribeca Wine Merchants in New York City; Harry Root of Charleston, South Carolina’s import shop Grassroots Wine; Harmon Skurnik of Skurnik Wines in New York City; and Chimene Macnaughton, owner of Wainscott Main Wines and Spirits in the Hamptons, Long Island, New York. Together, they have hired lobbyists and lawyers and launched an all-channels information and action campaign in what Posner characterizes as a “no holds barred attempt to help people understand the severity of the situation, and possible paths forward.”

SevenFifty Daily attended the information session and spoke with activist retailers and importers to find out how the industry should prepare for tough months—possibly years—ahead.

First, Know Where The Situation Stands

People are understandably confused. Following the 25 percent tariffs imposed on certain wines in October, there were two additional trade disputes which threatened 100 percent tariffs on a larger list of wines and spirits. Then, on January 20, Trump and French President Emmanuel Macron agreed to reach a compromise on tariffs related to one of those disputes, the digital tax dispute. As Posner explains, many in the industry—particularly those who aren’t directly dealing with producers on a daily basis—mistakenly breathed a sigh of relief, thinking that all tariffs were tabled.

But this tentative agreement affects only the digital tax tariff, not the 100 percent proposed tariff on all European wines that stems from a separate Airbus dispute. In other words, all wines from Europe are very much still facing a 100 percent tariff, which has created uncertainty throughout the industry.

“Our store focuses on handmade European wines, so this has hit us hard,” says Justin Coleman, owner of Charleston, South Carolina’s Monarch Wine Merchants. “I just heard from one importer who said that all of the wine he sells us, much of which is around $12 a bottle, will go up between $1.25 and $5 a bottle. And our allocated Burgundies this year went up as much as $60 a bottle. For the first time in years, we have leftovers because of the sticker shock our buyers had.”

Eric Crane, the director of business development at Empire Distributors, a wholesaler across Georgia, North Carolina, Tennessee, and Colorado, says that many of the smaller importers he works with deal exclusively with European brands and that the tariffs threaten to annihilate some of these businesses. “These tariffs are like a punch in the face for small importers, and their already slim margins are disappearing.”

Meanwhile, the effects of the recently imposed 25 percent tax are already being felt, and though the data at this time is not definitive, anecdotal reports are emerging of sales plummeting 30 percent for wines from regions like Bordeaux as a result. More substantial numbers from data and analytics company Nielsen shows that in the last four weeks of 2019, sales of imported French, Spanish, and German wines in the U.S. were down compared to the same period the year prior: French registered -0.1 percent, Spanish -7.2 percent, and German -8.7 percent.

Next, Answer the Call to Action

“There is so much confusion and uncertainty right now,” Tom Geniesse, founder and owner of New York’s Bottlerocket Wine & Spirit, says. He believes the focus now must remain on “educating consumers and members of the industry who are misinformed so they understand this is a tax that Americans will pay through wine purchases and jobs.”

Wainscott’s Macnaughton also says outreach, education, and action is essential. “People have no idea what’s really going on,” she says. “If more did, more would be marching, writing legislators, showing up in D.C., and making sure their voices are heard.”

There are several ways to stay up to date and take action, including joining U.S. Wine Trade Alliance on Facebook, and joining the One America March to stop tariffs on wines, spirits, and foods from Europe in Washington, D.C., on February 9. 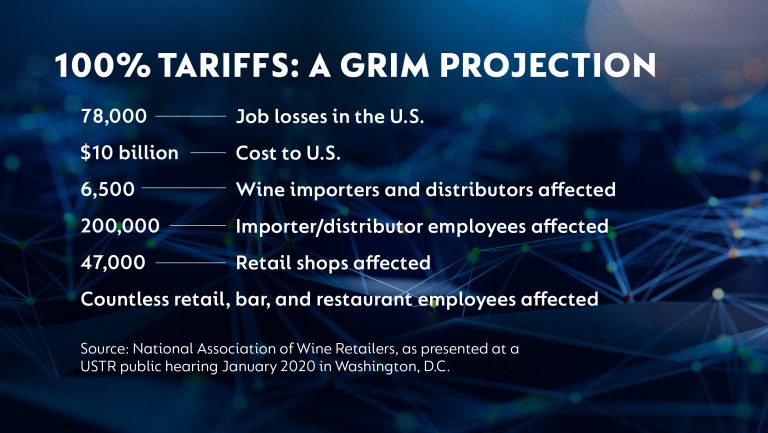 No matter what the USTR decides, the tariffs have created a logjam of activity from Europe to the U.S. It may be two to three months before wine sent from Europe arrives in U.S. warehouses, Steve Melchiskey, founder of import and distributor USA Wine West, a bi-coastal company, recently cautioned customers in an email.

“If you can get wine that faces tariffs, but hasn’t been tariffed yet—wines from France, Germany, and Spain that are more than 14 percent ABV, sparkling wine, Italian wine—do it,” Posner advises. “Even if all wine gets carouseled off the tariff list in February, it could be weeks or months before that inventory arrives because of the delays these tariffs have caused.”

Posner is carrying about 20 percent more product in his store than normal, particularly from countries threatened with the GAFA tax (a reference to the digital tax that Google, Apple, Facebook, and Amazon are involved in); Germany, Spain, the U.K., Canada, Italy, and Austria, with an emphasis on the ones that haven’t been hit with the 25 percent tariff.

While there are concerns over what will happen to stock traveling by boat, Melchiskey advises there are several opportunities to take action.  If a tariff is put in place before the shipment arrives, buyers can change the ocean bill of landing en route, so that stock arrives in a Free Trade Zone, where it can be put on hold (trucking costs $4.50 a case, storage is $0.22 per case per month, and there are additional dock charges, according to Melchiskey) until the tariff is lifted. Wine can also be cleared case by case when necessary for restocking purposes, he advises.  Alternatively, buyers can refuse the container and have it shipped back. This is costly, but cheaper than paying the 100 percent tariff, Melchiskey points out.

The Boston-based negociant Latitude Beverages plans to sell down its current stock, and if necessary, change course.

“We brought in as much inventory as we could in the fall,” says Latitude co-founder and wine director Brett Vankoski. “Then, depending on what happens in February, we may re-order from certain regions again. While we offer wines from all over the world, the majority of our wines are from Italy. If a worst-case scenario transpires, [we will] shift our focus to California, where there is currently an oversupply issue.”

Elli Benchimol, a sales manager at Washington, D.C.-based importer Five Grapes, says they have almost run through their stock of wines from France, Italy, and Spain, and are waiting to re-order until after the February decision. Benchimol knows they’ll lose key placements, but feels ordering ahead without knowing what will happen is too risky.

Others have less flexibility. Small specialty retailers like Monarch view continued tariffs as an “existential threat.” Coleman says, “We may have to close shop because our entire business model is based on the wines from countries that are being targeted.”

Diane Heck, of Italian-centric Southport Wines, says that a 10 percent or less tariff could be “managed through a combination of concessions and price increases to consumers.” Anything higher, though, would cause micro importers like hers to shut down. She says, “We are already researching buying a small vineyard in Virginia or another developing U.S. wine area because we really don’t want to leave the wine world.”

Uncertainty Over Tariff Outcome Continues to Take a Toll

The looming threat of 100 percent tariffs is already costing jobs, hurting businesses, and causing instability as the wine industry braces for a decision from D.C.

Understand What to Expect

By February 17, the Office of the United States Trade Representative (USTR)  may announce a decision on the tariffs, following a request for comments from the public. (The period of public comments ended on January 13.) But what’s at stake? Drilling into the USTR proposal, there are two separate categories under consideration: Annex I and Annex II.

The wines listed in Annex I cover non-sparkling wines from Spain, France, and Germany under 14 percent alcohol (the ones already hit with the 25 percent tariff). Annex II, meanwhile, broadly include all other European wines.

The notice issued by the USTR on December 12 called for comments with respect to whether products list in Annex I should be removed from the list, remain, or be increased to up to 100 percent, and whether “additional duties should be imposed on specific products listed in Annex II.”

Which means that, essentially, anything could happen. Wines originally hit with a 25 percent tariff could remain there, go down to zero, or go up to 100 percent. Wines from countries elsewhere in Europe could also face tariffs up to 100 percent.

And there is no law binding the USTR to the February 17 date. They could institute or remove the tariffs today, tomorrow, or in six months. (February 17 is a national holiday, so many believe the announcement could come February 15.)

“The USTR can impose a 100 percent punitive tariff at any time,” Posner says. “And no one seems to understand the severity of the situation. The industry messed up the first time around in April, when we could have raised objections, and if we mess up this time, we will have no one to blame but ourselves.”

The Federal Reserve, meanwhile, seems to be subtly steering the USTR and Trump administration away from the tariffs. Whether or not they pay attention—Trump has blasted the Fed on numerous occasions on Twitter, calling Chairman Jerome Powell a “bonehead” and his “enemy”—is an open question.

Something that the USTR and much of the industry seems to be overlooking, Posner, Root, and Macnoughton emphasized at the February 5 session, is that European producers don’t need the U.S. as a market as much as U.S. importers and retailers need them: The U.S. is not the largest market for wines in the E.U., and producers have already started pivoting to Brazil and China. As Crane puts it: “the major losers in this situation are American consumers and the American wine industry.”

Kathleen Willcox is a journalist who writes about food, wine, beer, and popular culture; her work has appeared in VinePair, Edible Capital District, Bust magazine, and Gastronomica, and on United Stations Radio Networks, among other venues. She recently coauthored, with Tessa Edick, “Hudson Valley Wine: A History of Taste & Terroir.” She lives in Saratoga Springs, New York.

Despite sudden additional tariffs, industry groups are organizing with optimism that the incoming administration could issue a game-changing executive order

From being Black in the white wine industry, to drinks pros who lost their sense of smell, and microbial terroir in the vineyard, here’s a look back at the stories that resonated most

Proposed 100 percent tariffs on European wine and spirits are back on the table. Here’s what the USWTA says you need to know—and do—before the July 26 deadline for public comment