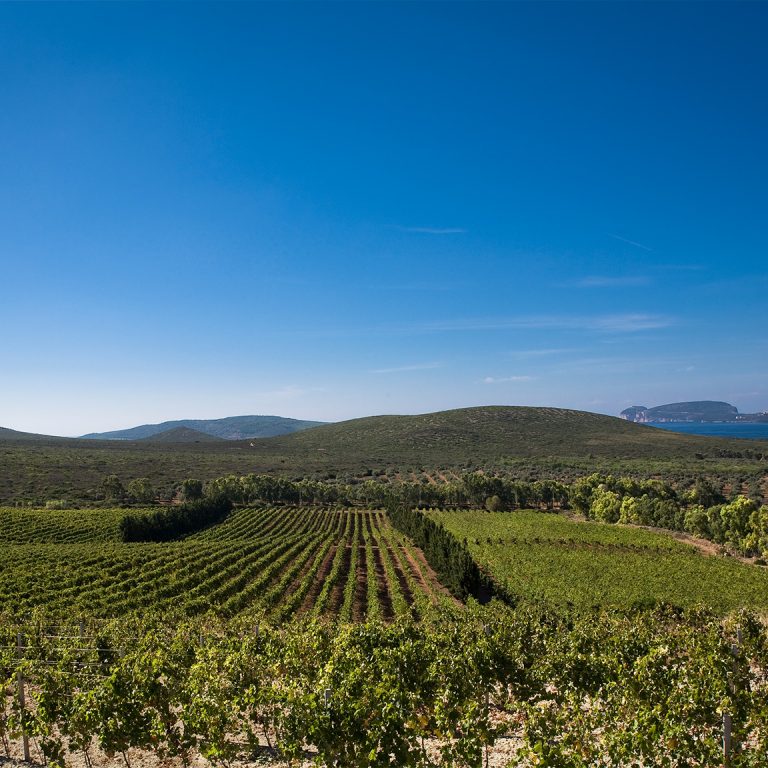 On an island that has become a favorite among sommeliers and retail buyers, Sardinia’s Alghero DOC is leading the island’s way into the future. Discover what makes this corner of northwestern Sardinia so special.

This advertising content was produced in collaboration with SevenFifty and our partner, Consorzio Tutela Vini di Alghero DOC.

Sardinia has become a favorite of sommeliers and buyers over the past decade, and no wonder: It’s not only one of the gems of the Mediterranean wine world, but it boasts the kind of long history, varied terroirs, and broad range of grape varieties that make it both ripe for exploration and poised for more widespread recognition.

Within Sardinia itself, few regions have seen a greater growth in notoriety in recent years than Alghero DOC, whose millennia-long winemaking history and fantastic range of indigenous grape varieties make it one of the most exciting in all of Italy.

As the second-largest island in the Mediterranean—after Sicily, to its southeast—Sardinia is increasingly known for its wines that taste as if they cost a lot more than they actually do; among professionals, it’s widely accepted that Sardinian wines represent some of the best value in the entire Mediterranean basin. On top of that, the wines are as unique as the landscape of the ancient island, with expressions that range from the fruit-forward and ripe to more savory, spicy, and acid-driven.

The Alghero DOC has the largest area of land planted to vines among all of the island’s location-specific DOCs. Alghero is found in the northwestern part of Sardinia, and it’s here that the true potential of the island comes into its sharpest focus. More familiar varieties excel here—Cabernet Sauvignon, Sauvignon Blanc, and Vermentino all produce stellar wines—but it’s a mistake to overlook indigenous ones like Cagnulari and Torbato, which are increasingly finding the way to this side of the Atlantic and onto wine lists and retail shelves. And, of course, Cannonau is the island’s calling card—a thoroughly unique expression of one of the world’s greatest warm-climate red varieties.

The best that Sardinia has to offer comes to fruition in the Alghero DOC, an appellation of impeccable climate, complex geology, world-class producers who are both planting new plots and reclaiming old ones, and a thoroughly unique history that has led to its current role as a leader in the region. And while its winemaking history may have roots that stretch back for thousands of years, it is also forward-thinking, too, with an increasingly passionate focus on sustainability. All of this makes the Alghero DOC worthy of renewed focus, attention, and admiration.

There are three main types of soil in the Alghero DOC, and each has a deep and unique impact on the expression of the wines that are crafted from the grapes grown in them. Dolomitic limestone soils, which were deposited between the Paleozoic and Mesozoic periods; Pleistocene-era floodplains and cemented aeolian sandstones; and Cenozoic-era, acid-effusive rocks all leave their mark on the vines whose roots are sunk into them. This results in the kind of geographical specificity in Alghero that only the best appellations around the world can lay claim to.

Great wine, of course, isn’t just a product of ancient and varied soils: The climate is a key factor, too. In this regard, Alghero is perfectly positioned to afford its vines their fullest expression. This is a temperate-warm part of the world—it is the Italian Mediterranean, after all—yet the moderating influence of the sea is an ever-present factor in the life of the vines and the ultimate expression of the wines.

Vineyards in the Alghero DOC are as far as 30 kilometers from the water and as close as a few hundred meters, which means that virtually all of the wines shimmer with the telltale saline and mineral notes that are so typical of the region. Combine that with the Mistral, the famous wind that sweeps over so much of this part of the Mediterranean, and Alghero DOC has what might be considered the perfect recipe for wines of expressiveness, idiosyncrasy, and energy.

Stretching from west to east in the Sassari province of northwestern Sardinia, the Alghero DOC sweeps across the municipalities of Alghero, Olmedo, Uri, Ussini, Tissi, Ittiri, and Ossi. Part of Sassari is considered to be part of the appellation as well. Sardinia as a whole is an ancient land, one of the oldest in all of Europe, and exploring Alghero’s widely varied terroirs in particular quickly becomes a lesson in the geological history of the Mediterranean.

In Alghero DOC, the variability of soils, as well as the microclimates of the particular vineyard blocks, leave their mark on the wines in deliciously assertive ways. And because the region is fairly flat—though there are some low-lying hills in the east—the influence of the Mediterranean is constant, especially for producers with close proximity to the sea, meaning they are constantly being more impacted by its weather and moderating influences than those further inland.

There is ample evidence that wine was being made in the area of the present-day Alghero DOC as long ago as the Iron Age. Archaeologists have found Phoenician-style amphorae made of local clay in Sant’Imbenia, an ancient Nuragic-era village on the Bay of Porto Conte, which is yet more proof of the ancient origins of grape-growing and winemaking. There also is a compelling argument to be made that Vitis vinifera is indigenous there, and was ultimately domesticated by cultures as varied as the Phoenicians, that Carthaginians, and, later on, the Spanish.

Indeed, it was Spain, not Italy, that had one of the most important influences on the wine culture of this part of Sardinia. The Spanish conquest of Sardinia occurred in 1717, and following it was a time during which certain trade advantages shaped exchanges between the two lands. As a result, both workers and grape varieties poured into the island from the Iberian Peninsula, leaving an indelible mark on the island in terms of its culture, architecture, viticulture, and winemaking.

Today, that influence can be felt most clearly in Cannonau, one of the most important grapes in Spain and, not surprisingly, the most important in Sardinia, too. Hundreds of years before that, the less-familiar variety Torbato was brought to Sardinia in the 1300s by the Catalans. (Other varieties, of course, were always present—Cagnulari is a good example.)

The wine culture of today’s Sardinia—which is officially one of the 20 wine regions of Italy—owes a great deal to the past in the modern-day areas of the Alghero DOC. It’s a history that continues to reverberate even today.

Alghero DOC excels with a range of grape varieties, both indigenous as well as international. What ties them all together is the fingerprint of the land, the sea, and the climate, which arguably do just as much to shape the final expression of the wine produced from these five key varieties as anything else. Add to that the often salty Mistral wind that whips across this mostly flat land, and you have the recipe for thoroughly unique wines that are intimately tied to this particular part of Sardinia.

It is impossible to talk about the great wines of Sardinia in general, and of the Alghero DOC in particular, without first addressing Cannonau. It’s believed to have been brought here by the Spanish, but when grown in the Alghero DOC, it takes on a thoroughly unique character. Cherry, scrubby herb, and spice notes are cut through with bracing minerality, making this often both savory and generous.

Though you can find Vermentino throughout a decent swath of Italy, its expression in the Alghero DOC is particularly compelling. Here, citrus and autumn orchard fruit are framed by the kind of subtle salinity that makes this particularly food-friendly.

This variety is known as Graciano in Spain, but its role there is often relatively limited. When grown in Alghero, however—where it is believed to be indigenous—Cagnulari takes on a savory character, which is a particularly appealing counterpoint to its wild berry notes. In recent years, forward-thinking producers have been seriously exploring its potential to produce profound wines.

This variety was brought to Alghero in the 14th century by the Catalans, but today, it is far more widely associated with Sardinia than Spain. No wonder: Whether it’s produced in a still or sparkling style, grown and crafted to be bright and energetic or richer and more dense, this is a variety whose subtle floral notes hovering above it all remain deeply appealing.

This may be one of the most widely known and planted varieties in the entire world, but nowhere else does it express itself the way it does in the Alghero DOC: The typical notes of currants, cedar, and tobacco are here pulsed through with a kiss of the sea, which lends a core of mineral to a wine that most people think they’ve seen every version of.

The Alghero DOC is one of the most exciting and dynamic not just in Sardinia, but in all of Italy. With each passing year, it seems, more producers are exploring and discovering some new tucked-away corner of the appellation that’s perfect for expressing the inimitable character of this part of the island. And they’re doing so with an increasingly broad range of varieties, giving even the least familiar among them the respect they so richly deserve.

The wine-tourism infrastructure continues to grow, too, and visitors from across Europe and around the world are taking more advantage of all that the Alghero DOC has to offer every year. Combine that with the growing number of hotels and restaurants popping up, and the gorgeous Mediterranean weather, and this is a wine lover’s paradise.

Finally, there is a serious focus being trained on sustainability, which makes sense: Not only is that of increasing importance in the face of climate change in general, but the uniqueness of Alghero DOC’s terroir makes it uniquely crucial to preserve all that it offers. This, after all, is a land that’s been shaped by millions of years of geological forces and thousands of years of cultural ones, and the Consorzio Alghero DOC has been closely working with both growers and producers to ensure that their work is carried out in ways that don’t just protect the natural environment, but that also respect it. Organic and sustainability initiatives are being launched constantly here.

It all adds up to a region whose future is as bright as its legendary past. In a world in which consumers are increasingly searching for wines that are tied to unique pockets of the planet, the Alghero DOC offers that and then some. No matter how much of a novice or expert one might be, or what sort of budget they’re working with, there are wonders to be found there.