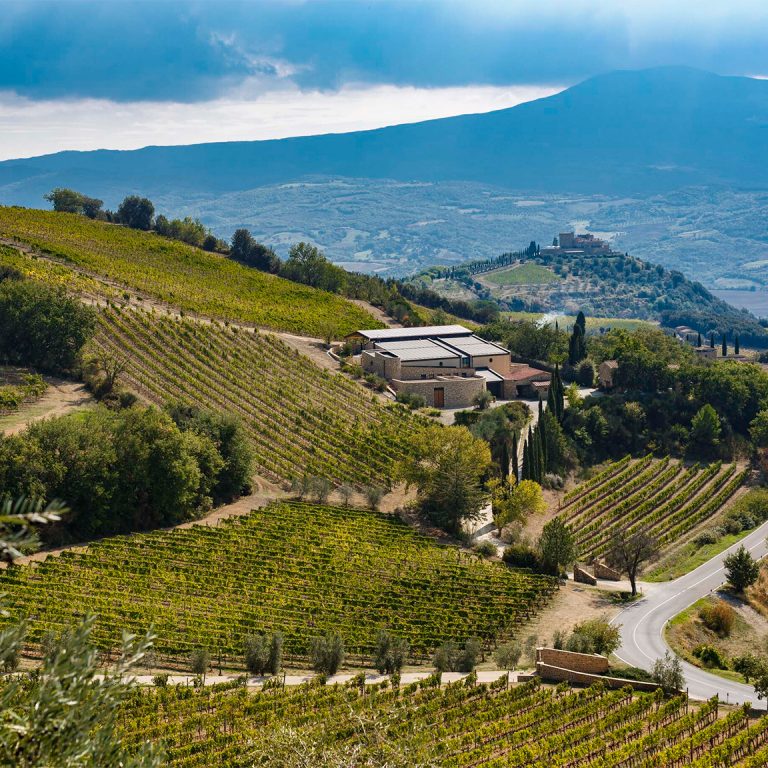 
Montalcino needs no introduction, discoveries can still be found off the beaten path, delving into the production’s sub-zones and specific terroirs. San Giorgio is indeed in a lucky spot: a ridgetop 1,300 feet above sea level in Castelnuovo dell’Abate. Concentrating on old vines and organic viticulture, San Giorgio is producing especially elegant versions of the traditionally powerful red wine.

This content was produced in collaboration with SevenFifty and our partner, Winebow.

Sites for agriculture and viticulture were run in Montalcino by noble families for centuries, and in its southeast, the Castelnuovo dell’Abate area continues to be one of the most important for wine production thanks to high altitudes from 800 feet to 1,300 feet above sea level and a variety of soils resulting in a complex wine expression.

Here in 1982, two years after the Sangiovese-only Montalcino DOC turned DOCG, a local vintner founded the San Giorgio estate. Having gradually grown in reputation, 34 years later the property was acquired by the Tipa-Bertarelli family and became part of the Collemassari Group, which already owned the neighboring and well-known Poggio di Sotto.

The San Giorgio estate covers 142 hectares which include 26 hectares of cordon-spur-pruned Sangiovese vines on steep rocky slopes, facing east and southeast, with sandy clay at the higher-level vineyards and rocky clay and gravel soils on the lower ones.

After the acquisition, the Tipa-Bertarelli family worked to preserve the old vineyards of the property. They extended that love of tradition to the cellar, and removed the previous owner’s old barriques. Working with low yields of about two tons per acre, winemaker Luca Marrone ferments spontaneously in stainless steel, then ages both wines in 30hl to 40hl casks for styles that are slightly more bolder and concentrated than neighboring Poggio di Sotto.

The two estates share the same farming regimen such as low yields and purple harvest as per the philosophy of the family’s ColleMassari Group—San Giorgio is also under conversion to organic.

At San Giorgio, gravel and clay of volcanic origin give their wines a round, deep structure, offering the same quality and terroir by way of expression and a lower price tag than Poggio di Sotto.

Two Tenuta San Giorgio wines are imported to the U.S. by Winebow:

This bold Rosso di Montalcino is stainless-steel fermented then aged in large oak casks for a year. Rich yet lively and focused, with ripe blackberries and spice, and round tannins. Ciampoleto in local dialect means a piece of land with an excellent position and a mild climate.

Stainless-steel fermented, then aged in traditional large oak casks for at least two years, this Brunello has sweeping acidity and soft tannins with a purity of blue and red fruit and violets, finishing with coffee notes. Named after a local 12th-century hero who led Montalcino to rebellion against occupying forces.