Let’s face it: Saying something has “aged like a fine wine” is as clichéd a description as it gets, especially in the drinks business. And yet, as SevenFifty Daily celebrates its second year covering the ever more complex culture of wine, beer, and spirits—we members of the editorial team can’t help wondering how our industry will continue to evolve, both in bottle and out.

Evolution and innovation are the backbone of the trade, and we’ve been right here to help decipher and analyze what that means for you. Whether we’ve highlighted exciting products and emerging technologies or teased out the significance of developing laws and regulations, our coverage has been expansive yet focused.

Time and again, though, readers have proved that what’s new and shiny isn’t everything. Topics as evergreen as the always-confusing nature of state-to-state shipping laws continue to generate as many questions as answers. Meanwhile, what’s-old-is-new-again techniques, like amphora fermentation and aging, still capture the imaginations of intrepid producers. As a publication, we’re dedicated to discussing the issues most meaningful to you.

Along the way, we’ve helped our community of retailers, somms, producers, importers, and distributors connect over issues that inspire and drive them to improve the industry. By covering such worthy topics as parenthood, diversity, mental health, and sustainability, we’ve become a hub where industry experts can think out loud and invite further conversation.

Here’s to fostering more conversations: Drop us a line and let us know what issues you’d like to see us tackle and report on. For now, we’ve gathered the stories that most resonated with our community over the past two years.

Thank you for your continued support.

10. Thriving While Sober in the Booze Industry

Recently, a handful of high-profile bartenders, chefs, general managers, and others in the industry have been speaking out about their struggles with alcohol abuse—and their newfound sobriety. Though not all recovering alcoholics have stayed in the industry, many have—and they say their careers are more successful than ever. The stigma of being a drinks professional with alcoholism is seemingly starting to disappear. [Read more]

The first thing you need to know about Dr. Stoner’s herbal liquors is that the brand was actually founded by someone named Stoner—Craig Stoner, in fact, who is being literal when he says, “I’ve always been a Stoner.” Also, he’s actually a doctor—technically, a retired dentist who lives in southwest Virginia. He’s agreeable and bald, with a white, Santa-like beard and—I kid you not—twinkly eyes.

About seven years ago Stoner was on a bicycle tour through the Badlands of South Dakota when he stopped at a bar at the end of a long day to slake his thirst, which led to some discussions. “The waitress had a gold marijuana leaf necklace on, and had ‘420’ tattooed on her wrist,” he recalls. “I asked, ‘What’s that all about?’”

She explained. “So I’m sitting there drinking my beer, just kind of thinking about it,” Stoner says. “I’d been interested in distilling and beverages, and I thought, What about something to get those two worlds together?” [Read more]

8. The Science Behind Decanting Wine

Evaporation and oxidation are the main forces at play, but what’s really happening to the wine?

After being cooped up tightly inside a bottle, a wine often needs a breath of fresh air to express itself and show its full range of aromatics. Pouring wines into a decanter is a common way to get them to do just that. As the wine splashes and flows inside the decanter, air interacts with it. Some odors dissipate, others come to the forefront, and the wine is often found to become more expressive. At the same time, the mouthfeel may soften, as tannins appear to lose their hard edges. But what’s actually happening on a chemical level? [Read more]

The Court of Master Sommeliers, Americas, reports that passing candidates must retake the tasting portion

Whether working the floor of a restaurant or helping a customer in a wine shop, sommeliers are often called on to describe wine. It’s a task that can be fraught with peril. Sarah Tracey, the wine director at Rouge Tomate and Villanelle in New York City, says she learned this the hard way. “I had a table of 20-something girls,” she says, “and they were asking about a wine that had been aged sur lie. I used the word yeasty to describe it, and they looked horrified.”

Part of the problem is that guests often don’t understand the vocabulary of wine. A guest may state a preference for “dryness” in a wine, when what that person is really describing is the effect of its tannins. Throw in the fact that “cherry” to one person seems like “raspberry” to another, and the process of communicating through tasting notes becomes downright challenging. To minimize misunderstandings, some somms eliminate certain words and terms from their on-the-floor wine discussions altogether. [Read more]

5. Why an Ancient Winemaking Technique is Making a Comeback 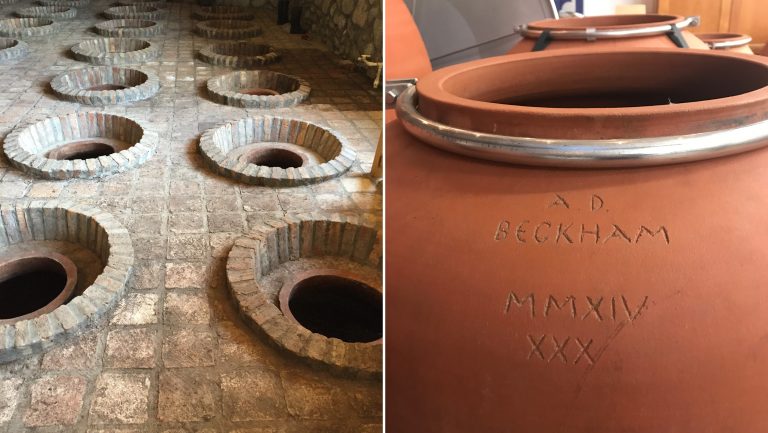 From Italy to Oregon, the use of clay pots in fermentation and aging is gaining devotees

Clay vessels have been used to ferment and age wine since ancient times. Neolithic Age wine vessels recently found in the Republic of Georgia were tested and confirmed to be the world’s oldest. “Almost every ancient culture, from the Canaanites to the Egyptians to the Assyrians to the Greeks and Romans, vinified in pottery vessels,” says Patrick McGovern, Ph. D., the scientific director of the Biomolecular Archaeology Laboratory at the University of Pennsylvania Museum in Philadelphia. His team conducted the liquid chromatography-mass spectrometry testing that confirmed the age of the Georgian vessels.

While clay pots are an uncontested link to the past, they are also becoming a resource for the future of winemaking. Beyond the romanticism involved in borrowing ancient techniques, terra-cotta pots offer unique interactive properties with wine—they pull out acidity, allow oxygen exchange, and provide superior insulation, among other benefits—that are different from those of stainless steel, wood barrels, or concrete. These factors are capturing the attention of winemakers around the world and encouraging new scholarship. [Read more]

4. The Rise of Ready-to-Drink Cocktails

Ask the average consumer today what his or her impression of ready-to-drink (RTD) cocktails is, and you’re likely to get a mixed response. Many consumers will share their experiences as having been disappointing, and the phrase “sickly sweet,” or something similar, is often part of their description. It’s as if they really wanted to like the products but were let down by the actual liquid inside the can or bottle.

The explanation “They’re too sweet” was the third most common response (21 percent) from consumers who were asked in a recent survey by the global market research agency Mintel about why they don’t drink—or don’t drink more—RTD alcohol beverages. Also making the list were “They contain too many artificial ingredients” (13 percent) and “They’re low quality” (9 percent).

But times are changing, A new wave of RTD cocktail products is emerging and revolutionizing this category—and helping it shed its reputation for low-quality concoctions. [Read more]

The search for the soul of Chardonnay has been labyrinthine. There have been so many wrong turns. So many dead ends. So many retreats and reorientations. (Remember the 180-degree swing from heavily toasted oak to “inox” steel tanks?) Those on the cutting edge of Chardonnay production today are looking fearlessly forward while holding tight to the traditions of the past.

And those traditions include a bit of black magic: juice that comes pouring from the press as dark as pitch but is a shimmering green-tinted gold by the time it’s bottled. Some call this mysterious liquid Black Chardonnay. [Read more]

2. Starting a Spirit Brand Without a Distillery

A drinks industry lawyer discusses product development, legal compliance, and getting to market

The number of distilleries, however, grows almost daily. More than 70 distilled spirits plant permits were issued by the Alcohol and Tobacco Tax and Trade Bureau in April 2018 alone. But as Rothbaum points out, a spirits producer doesn’t need a still or even a physical location to launch a brand. “The brand is largely where the value is,” says Malte Barnekow, the CEO of The 86 Company, which produces the brands Aylesbury Duck Vodka, Caña Brava Rum, Fords Gin, and Tequila Cabeza—all without a distillery of its own. [Read more]

1. What You Need to Know About Shipping Alcohol

A drinks lawyer demystifies the recent buzz about legal changes affecting alcohol shipping in the U.S.

Despite a rash of recent articles and social media posts suggesting that the days of shipping of alcohol are over, the fact is that little has changed. Well, Missouri scaled back its rules governing out-of-state retail shipments, but that is hardly national news. “Really, nothing has changed in the direct-to-consumer regulatory landscape in recent months,” says Jim Agger, the vice president of business development and marketing at Wine Direct. Rather, according to Matt Mann, Wine Direct’s general counsel, “there has simply been heightened scrutiny by the state regulators, including in Illinois, Michigan, and New York.” [Read more]

Five years in, we look back at the quintessential stories that go beyond the glass, showcasing the people and ideas moving the industry forward

This year, our readers gravitated towards features exploring the ‘new normal’ of doing business in the drinks industry

11 wine and spirits distributor executives share the purchasing trends they are seeing—and how they predict the rebound will play out across the U.S.

Despite fire and smoke damage, excellent wines were produced from Anderson Valley to Santa Barbara