When most of us think about wine fraud, we think of headline-making names like Rudy Kurniawan, the first person to be arrested for counterfeiting wine. Released from federal prison on Nov. 6, 2020 after serving seven years behind bars, Kurniawan, aka “Dr. Conti”—so named for his prolific Domaine de la Romanée-Conti trades—sold millions of dollars of fake bottles between 2004 and 2012, most of that through auction houses such as Acker Merrall & Condit, which alone sold $35 million worth of Kurniawan’s bottles in just two auctions.

Upon his release, Kurniawan’s attorney, Jerry Mooney, fielded queries about his client working as a tasting consultant. Mooney speculated the forger could return to his trade, as long as he was transparent about his actions. As Kurniawan awaits deportation at a U.S. Immigration and Customs Enforcement (ICE) holding center, some worry that he could find a way back into wine.

Yet hiding behind high-profile players like Kurniawan and Hardy Rodenstock—the German wine trader who peddled the fraudulent “Jefferson bottles” of 18th-century Lafite to collectors such as Christopher Forbes and Bill Koch in the ‘80s—recent reports across the globe demonstrate that fraud is more pervasive in the industry than people realize. Many players exist on a small scale, says Edgerton—and they aren’t always trading in unicorn bottles.

From Penfolds to Jacob’s Creek, even a counterfeit whiskey ring recently uncovered in Rioja, fake bottles are produced and being sold around the world. And with the pandemic-fueled uptick in online sales of fine wine, combined with lessened ability to enact preventative measures, a growing number of fraudulent bottles are circulating undetected. 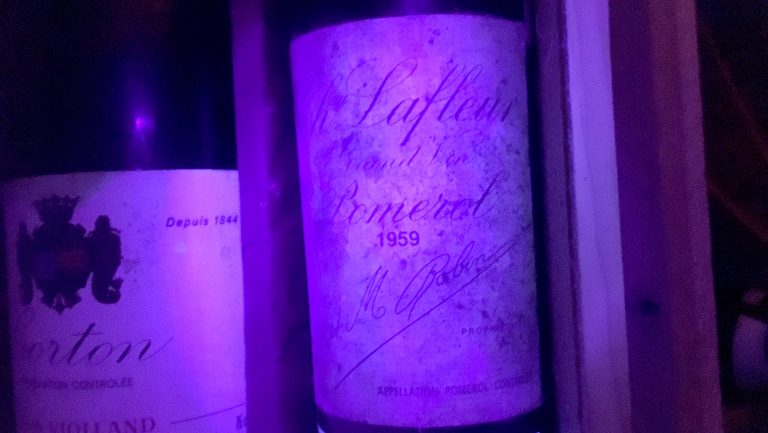 “The concept of wine fraud is broader than just fake labels,” says Edgerton, noting his own experience in detecting wholesale wine substitutions in which a cheap or adulterate wine is bottled in a prestige package.

Wine fraud is an estimated $3 billion gouge in the industry.

Frank Martell, the Los Angeles-based senior director of fine and rare wines for Heritage Auctions, agrees. “It is not limited to a romanticized idea of the person who could whip out van Goghs without anyone knowing the difference—it’s often not that,” he says. “There’s an enormous amount of fraud at the lower level, and it’s not sexy and it’s not Hollywood.” As an example, he cites the U.K. market’s 2011 discovery of hundreds of fake bottles of Jacob’s Creek, an Australian producer whose bottles typically retail for under $15.

Martell had encountered some fakes associated with Rodenstock in the late 1980s, but now, he says the occasional questionable bottles he sees are “sort of low-grade fakes of wines from the ‘50s with brand-new labels or corks, and that immediately raises flags.”

“Counterfeit wines definitely get a lot of the flashy headlines and stories,” says Maureen Downey, the founder of Chai Consulting and Winefraud.com, “but there are countless other ways that people can make a lot of money off unsuspecting collectors.”

Downey, who served as the FBI’s key expert witness in the Kurniawan discovery, points to thefts at production and storage sites; failure to deliver on purchases and investments (either on the futures markets or via fake internet and eBay sellers, wine funds, and investment schemes); misrepresentation of the wine (such as variety, blend, origin, or vintage), and the marketing of damaged wines. She estimates wine fraud is a $3 billion gouge in the industry.

The pandemic, she says, presents an increased opportunity for fraud activity, between the uptick in online sales of fine wine in both retail and auction, and the lack of vetting due to travel restrictions, shutdowns, and even layoffs throughout industry channels.

“The preventative measures aren’t always able to take place as they usually would,” says Downey. “With the growth in online purchasing and new collectors who just want to buy as opposed to create relationships with wine buyers, it creates a gap that unfortunately we have seen counterfeiters fill.”

But professional buyers like Martell say they are on the lookout, being “cautious to a fault” in these times. Kristie Petrullo Campbell, the managing director at Blacksmith Wines, a Hudson Valley, New York-based fine wine merchant that sources mostly from private collectors, says a company’s reputation depends on how seriously it takes authentication.

“Nobody wants to be associated with a fraudulent wine, so you have to have a lot of conversations about anything you suspect,” she says. Her team personally visits sellers’ cellars and selects wines based not only on value, but storage conditions and provenance. Her company purchases entire collections, a practice that offers deep insight into a collector’s history and lessens the chances of fake one-offs.

“We have seen random bottles of fraudulent wines that passed inspection somewhere along their journey, and we reject those that appear in either dubious condition or raise too many questions,” says Petrullo.

Lauren McPhate, the director of sales at Manhattan’s Tribeca Wine Merchants, said purchasing on the gray market—a secondary, but legal, channel in which wines are sold at lower prices—is more common now with the popularity of online buying, and it presents certain risks.

“Rule No. 1: Be careful where you buy,” she says, advising buyers to work with known sources if they are bypassing the three-tier system for higher-end bottles. In addition to the gray market, this includes private sales and at auction, where she advises proceeding with caution.

“It’s not because they’re trying to pull one over, but because the auction houses protect their sources and don’t want to have that information public,” adds McPhate. She says it puts an additional onus on the buyer to beware and perform due diligence on each bottle’s source.

How the Experts Detect Fake Bottles

Petrullo, who inspects thousands of bottles a year, says if a bottle is too good to be true, it probably is.

Experts like Downey and Edgerton have amassed proprietary databases with minutiae such as watermarks, ink colors, paper styles, and artwork (did that sheep on the Mouton label have an extra curl in its fleece?). Like sleuths, they use tools such as UV flashlights to detect adhesives and paper fibers in the labels, knowing when and how certain materials were used (or not).

Labels are a wealth of information, from their coloring and paper composition to how they are affixed. A UV flashlight, for example, will detect and illuminate “ultrawhite,” a paper component introduced in 1957. So, if your bottle of ’47 Cheval Blanc lights up, you’ve got a fake.

Labels that are too perfectly discolored or scuffed in odd ways are suspect. As tobacco, coffee, and tea are favored staining agents, Downey suggests giving dubious labels a sniff.

Experts use a good magnifying loupe to examine the textures in label ink, knowing the difference in quality between a letter plate press (sharp, fine lines), which most prestige producers use, and dot matrix (fuzzy edges and splatter) produced by common printers.

Bottles, too, are an artform, from production (in forms or glass blown), to color, markings and embossments, and punts. That ’45 Mouton doesn’t have a bottle size embossed on it? Don’t buy!

Be cognizant of wine laws and be able to spot what’s wrong with that 1953 Grand Cru Saint-Émilion (the designation wasn’t established until 1954) or the mixing of appellations, vintages, vineyards, and owners. That includes checking permissible bottle formats in prestige regions such as Bordeaux and Burgundy: What was the size, style, and production of bottles, and when?

Capsules and corks, too, tell a story. A cut or crinkled capsule on an older bottle could indicate it was refilled and replaced (lead was phased out in the 1980s, so a replacement capsule might be a newer, alternate material). Experts know the length of corks in certain appellations, which closures are fire-branded as opposed to inked, as well as the artwork of famous wineries. Corks on which the dates have been smudged? Suspect.

Those in the fine-and-rare trade know the brands and years to suspect due price and prestige: anything DRC, especially La Tâche; Henri Jayer; 1945 Château Mouton Rothschild; Petrus 1982 and older; 1945, ’47, and ’49 first-growth Bordeaux, plus other particular vintages, 1900 and 1928; Château Lafleur from the 1950s. But in today’s market, it goes beyond that list of rarities.

“I think most people look at it and say, ‘I don’t usually buy that type of wine,’ but Jacob’s Creek is that kind of wine, and a warehouse was found full of fake Sassicaia labels and bottles, so there isn’t a [safe] place where you can’t afford not to be fairly diligent about it,” says Martell. “It’s not a new problem, and it’s not going away just because Rudy was put in jail.”

Lana Bortolot has written on food and wine for Forbes, Dow Jones, Wine Enthusiast, Saveur, and other magazines of the wine and spirits trade. She reported on real estate for the New York Times, Wall Street Journal, and New York Post, and on design for Entrepreneur magazine. She is a candidate for Wine & Spirit Education Trust’s Level 4 Diploma. Having covered most European wine regions and a few in South America, she is always looking to add a new wine-stained stamp to her passport.

The pandemic exacerbated problems plaguing beverage alcohol warehouses, especially those around major ports. Are there any solutions in sight?

The Supreme Court decision to overturn Roe v. Wade left hospitality workers with even fewer healthcare choices—now some industry professionals are fighting back

Wine has been looking for ways to reach newly of-age consumers since the 1990s. What will it take to get it right in today’s market?